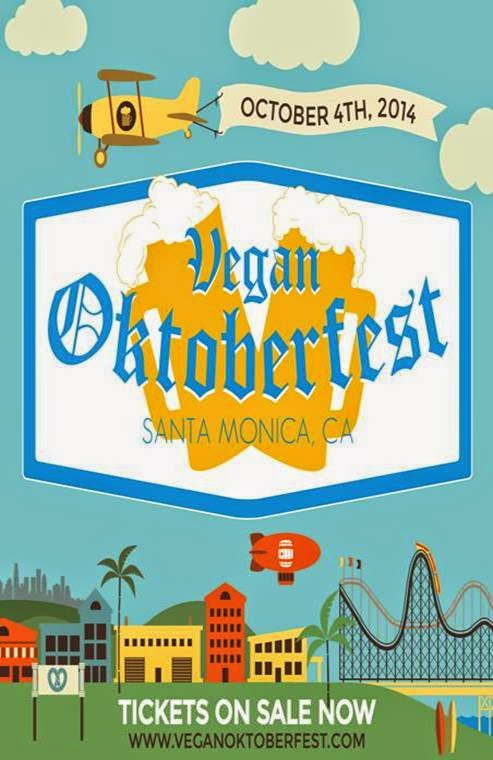 There are certain places that you avoid as a Vegan… places that focus on faces.  For that reason I’ve never been to Animal, my friend Adam’s place Dog Haus, and can never be a fan of southern cooking (bacon, bacon, and more bacon).  But things are about to change for one upcoming German Holiday…  Edible Skinny is excited to announce the World’s First Vegan Oktoberfest in Santa Monica on October 4 from 12pm-6pm.

Nestled next the beaches of SoCal, Vegan Oktoberfest will recreate the feel of a genuine German beer hall featuring live Oompah bands, Bavarian maidens, and of course, refreshing and delicious vegan craft beer poured to perfection by dozens of great breweries.  Vegan Oktoberfest, which can accommodate 3,200 guests, will provide attendees a traditional taste of Germany with a vegan twist; for an authentic Oktoberfest experience with a clear conscience.

Red Pill Productions LLC, a company founded by Los Angeles animal rights attorneys David Edward Burke and Jill Ryther will be producing the ‘cruelty-free’ event.  Vegan Oktoberfest will also benefit a good cause, with a portion of the proceeds going to Expand Animal Rights Now, an organization dedicated to using the legal system to help animals.

“Vegan Oktoberfest will be a festive, authentic, and social atmosphere that makes the bar scene seem dull by comparison,” says Burke.  “There’s no reason an event can’t be both outrageously fun and animal friendly.”

Tickets are currently for sale and are $40 for General Admission, $55 for VIP admission, which grants entrance an hour early and access to a designated VIP seating area, and $15 admission for non-drinkers.  For more information and to purchase tickets, visit www.veganoktoberfest.com.