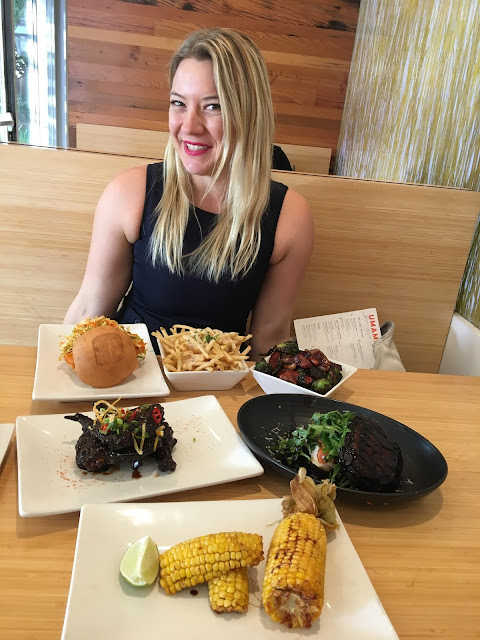 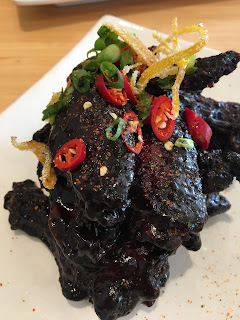 We’re very embarrassed to admit that a few weeks ago Edible Skinny finally made it to the LA burger institution Umami Burger for the first time ever…
Yes, I get it, Umami Burger (named after the fifth savory taste bud taste, the rainbow that includes the other four tastes) has a cult following among food lovers and burger devotees around the world; we mean GQ Magazine named it “Burger of the Year.”  And yeah, we always meant to get around to trying it, yet we never seemed to find the right moment to make it work…

But the perfect storm of the lovely Christy Fair’s birthday day and Guillermo Del Toro’s At Home with Monsters exhibit at LACMA inspired the need for monster burgers. 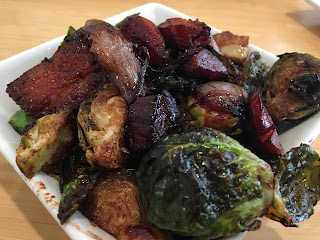 And so we wandered into the Umami Burger’s Grove location, an indoor-outdoor space that is sunny reprieve from the autumnal shopping hustle (but not before we photographed Miss Fair behind the wood cutout of a harvest scarecrow).

We started our adventure with the ever popular Caramelized Brussel Sprouts made of bacon lardons (aka huge ass cuts of bacon, as Miss Fair noted "I just had the thickest piece of bacon of my life"), glazed carrots, roasted garlic and shallots, truffle glaze.  It was massive amounts of bacon, green crispy to the teeth, and the right amount of truffles to make my dinner guest grin from ear to ear.  Not to mention this being paired with Japanese style wings with a Soy Glaze and Shichimi Pepper Mix.  And we hadn’t even gotten to the burger yet! 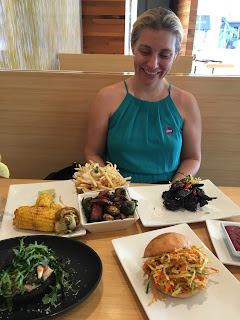 Now as many of you know I am a Veg so I judge many burger joints (and steak restaurants) by their French Fry offerings.  And I have to say I was not disappointed by Umami Burger!!!  Their Truffle Fries were an embrace of Thin Cut Fries, House Truffle Cheese, and Topped with Chives for that perfect creamy tangy one-two punch. Yummm (with three Ms as Kelly GraceThomas says).   The other Veg based dish I partook of while there was their Butter Corn topped with Parmesan, Master Sauce, Soy, and Lime.  Another knockout for the plant based participant.

And then it was onto the burger for Miss Fair, because if there’s one thing Umami Burger is known for is its burger… ;-) 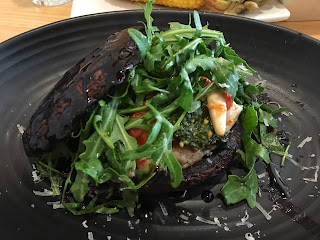 The Umami Burger gives its namesake adoration that Tinkerbell would appreciate!  All of their beef burgers are made using house-ground premium steak perfectly infused with Umami’s unique blend of enhancing sauces and seasonings.  Each location of Umami Burger has an exclusive burger as well!  At the Grove this burger is the Kinoko Burger composed of Portobello Mushroom Buns, Grilled Chicken Breast, Basil Pesto, Parmesan, Arugula, Cherry Tomato Confit, Goat Cheese, and Balsamic Glaze.  It was Mediterranean fabulousness in burger form according the delightful Miss Fair. 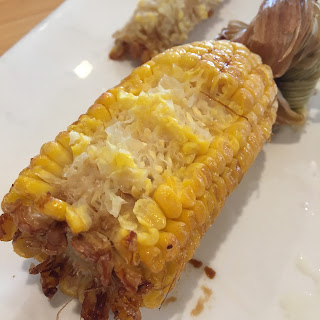 Here’s to life being delicious and finding the right moment to make GQ’s Burger of the Year work! ;-)

Posted by Kat Thomas at 1:29 PM No comments: 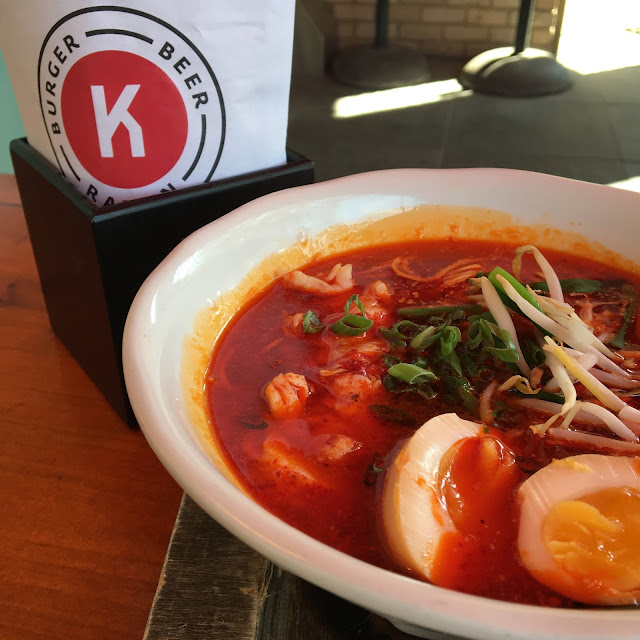 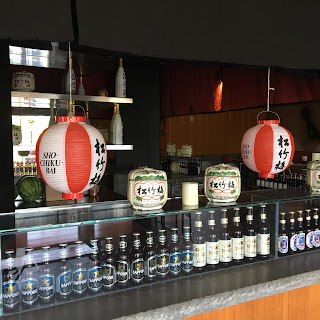 A couple of weeks ago Edible Skinny was shopping at the Americana in Glendale and while there we got our Ramen on at Katsuya’s noodle joint K Ramen.

K Ramen has a speakeasy feel entrance (follow the black winding staircase to the second floor) up to a glorious patio overlooking the Americana fountain.  The space used to be a private event space but is now a hipster-y, more budget-y friendly version of the first floor which houses SBE’s ever popular sushi joint Katsuya. 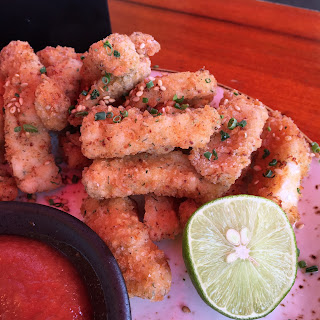 K Ramen is inspired by three of the culinary scene’s most lusted after dishes: ramen, burgers, and poke.  Crave-worthy dishes skillfully-executed and complimented with an extensive selection of Japanese brews.  The restaurant is bare-bones modernity at its finest.  Paper napkins, menus on temp. paper pamphlets, and nothing on the menu is over $15.  Sweet!!!
We forgo-ed the Poki for a small bite plate of Fried Calamari with Wasabi Cocktail Sauce and Tater Tots with Duck Fat Drizzle.  This is the thicker choice cut of the squid (no tentacles here) battered to perfect.

And then it was on to what K Ramen is known for (wait for it, wait for it…): Ramen!!!  My guest (since I’m the Veg girl) dined on the restaurant’s signature dish of Lobster Ramen.    The most popular item at K Ramen, it’s composed of Myojo thin noodles in a broth of 15-hour chicken stock, lobster butter, fish stock with a kimchi base.  The bright red broth is topped with a perfectly cooked marinated soft-boiled egg, golden chives, and green onion and has a slightly spicy aftertaste.  At $15 it’s the priciest item on their budget-friendly menu. 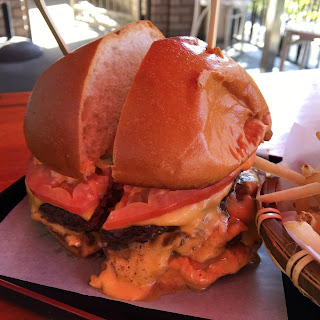 And then onto a massive burger!  (of which there’s only one option!): ½ pound of beef with Chef’s special Spicy Creamy Sauce, caramelized onion, heirloom tomato, & American cheese on a local artisan bun (my guest added avocado to increase a bit more to the perfect flavor profile).  The Behemoth is served with your choice of fries or tots (we went fries all the way in this bitter battle!).

And for sweet treats K Ramen offers Coolhaus ice cream by the pint.

‘Nuff said, see you at the Americana!

Posted by Kat Thomas at 4:54 AM No comments:

Our Editor in Chief, Kat Thomas recently wrote an article the Los Angeles County Museum of Art (LACMA) exhibit Guillermo del Toro: At Home With Monsters for the Santa Monica Observer.   Check it our below! 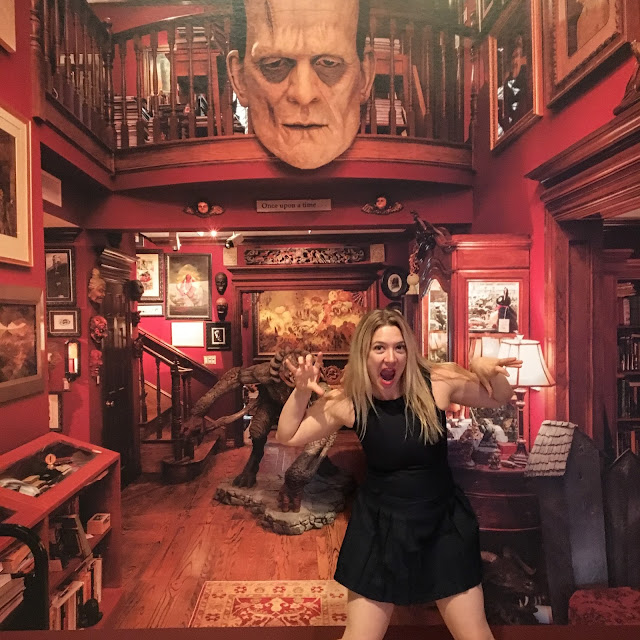 Del Toro has been numerously cited as one of the most inventive horror/fantasy filmmakers of his generation.

Del Toro has reinvented the genres of horror, fantasy, and science fiction. Working with a team of craftsmen, artists, and actors, and referencing a wide range of cinematic pop-culture, and art-historical sources del Toro has created the lucid dreams he experienced as a child in Guadalajara, Mexico.

Taking inspiration from del Toro's extraordinary imagination, the exhibit reveals (at least until November 27, 2016 when it closes to travel to its next museum location) his creative process through his collection of paintings, drawings, artifacts, and concept film art...


http://www.smobserved.com/story/2016/10/13/news/guillermo-del-toro-at-home-with-monsters-los-angeles-county-museum-of-art-lacma/2113.html
Posted by Kat Thomas at 2:34 PM No comments:

2 Easy Neck Stretches for Less Stress with Succeed With Omid


If you haven't subscribed to Edible Skinny's Health and Wellness editor Omid Vojdani's of YouTube channel what are you waiting for?

Omid, of Succeed With Omid, is a personal trainer, corrective specialist, and health coach in Los Angeles, gives great tips on how to hack your life to better wellness!  So head over to his channel and start to get health-edu--cated!!!