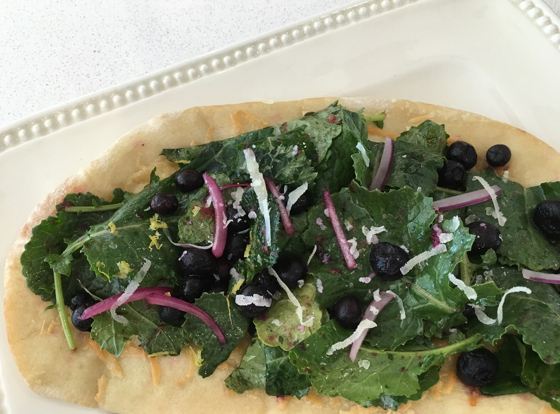 By Omid Vojdani of Succeed With Omid

As a fitness professional, it is my job to not only create exercise programs that are safe and effective for my clients, but also to provide as much information on nutrition as I can. For easy to make, low calorie, and delicious recipes, one of my favorite sources is Alison Sweeney. Whether it is through her book, The Mommy Diet, or through her many television appearances, Alison has shared some of the best recipes to show that healthy food does not have to taste like cardboard, and I’ve happily shared many of her recipes with my own clients.

So naturally, I was super excited to be able to share one of her awesome recipes with the Edible Skinny audience. Alison’s Blueberry Salad Flatbread is low calorie, easy to make, and most importantly delicious. 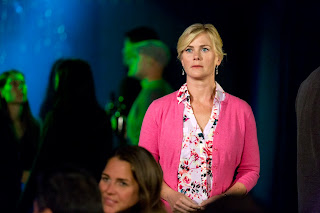 For more of the amazing Alison Sweeney, her latest acting role is The Irresistible Blueberry Farm, which airs October 2nd on Hallmark at 9pm. She is also hosting the Halloween special of the Kids Baking Championship with Duff Goldman October 5th on The Food Network, which looks like it will be another great source of some awesome recipes that I can’t wait to try!

Here’s to life being delicious, and to more Alison Sweeney sharing her deliciousness with the world!

SM Observer Article: The Business of Getting High: Exploring the Cannabis World Congress and Business Exposition

Our Editor in Chief, Kat Thomas recently wrote an article of on the The Business of Getting High: Exploring the Cannabis World Congress and Business Exposition for the Santa Monica Observer.   Check it our below! 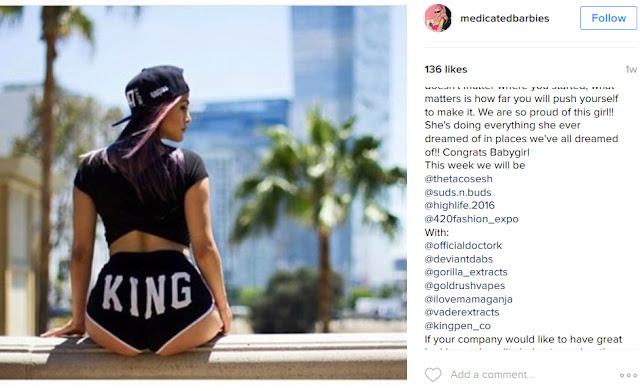 The Business of Getting High: Exploring the Cannabis World Congress and Business Exposition

Thousands of suited up budtender businessman gathered Sept. 7-10 at the Los Angeles Convention Center for the Cannabis World Congress and Business Exposition, and there was nary your classic Shaggy stoner in sight. But what there was was a lot of talk of a lot of green, both of bud and money to come from bud. It is estimated that $50 billion a year is generated in cannabis sales within the United States, yet only $5.4 billion of that is legal sales.

But all that's about to change.

Prohibited across the United States less than five years ago, marijuana is now legal and regulated in Alaska, Colorado, Oregon, Washington, and the District of Columbia. This November, voters in Arizona, California, Maine, Massachusetts, and Nevada will also vote on AUMA (Adult Use of Marijuana Act) ballot initiatives that would repeal prohibition of the drug, with investors expecting a large uptick in the market after these states votes in November.

The Cannabis Means Business expo housed the entire west wing of the Convention Center. Five conference halls hosted speakers who spoke for 40 minutes about specific aspects of the industry. Up to 30 speakers lectured each day about topics ranging from growing, to Native American laws and cannabis, to policy reform and banking. One of the major topics was the relationship between prescription meds and cannabis. T.V. and radio personality Montel Williams spoke to room of nearly 70 people on Thursday afternoon about his addiction to opioids and how cannabis saved his life.

Avis Bulbulyan, the Chief Executive Officer and Founder of SIVA Enterprises, was one such featured speaker for Opening Day, lecturing on "The Road to State Licensing." Originally established as Bulbulyan Consulting Group, SIVA Enterprises leverages more than a decade of experience in the cannabis industry to provide consulting services, turnkey management, venture opportunities, and brand acquisitions and licensing. "Jumping into the Marijuana industry is as simple as taking traditional business principles and applying to this industry, you just need to know the ins and outs," noted Bulbulyan.

Just this year, SIVA has helped develop and launch 4 new cannabis companies: ZASP (cannabis-infused drinks), Varavo (edibles and oils), the Herbal Pain Relief Center (a cannabis dispensary), and Verdant (a cannabis distribution company). "Because marijuana is still a Schedule 1 drug you need to brand well and then franchise in others states through the licensing of your product and IP."

Lectures wasn't the only option to partake at the Cannabis World Congress. Numerous vendors displayed their forays into the world of Mary Jane in the convention centers enormous auditorium. People had ample opportunity to mill around checking out new products and technology or just network.

The pretty cannabinoid faces of Medicated Barbies were representing Deviant Dabs, a company that focuses the farmers market buying crowd by crafting "artisanal concentrates made in small batches from top quality organic cannabis grown by multi-generational experts in the craft."...


To read the full article check out:
http://www.smobserved.com/story/2016/09/27/news/the-business-of-getting-high-exploring-the-cannabis-world-congress-and-business-exposition/2021.html
Posted by Kat Thomas at 1:28 PM No comments:

A Pictorial Glimpse Into the Bars and Bakeries Of Burning Man


“How can you tell good bread is without tasting it?  Not the smell, not the look, but the sound of the crust.  Listen.  (Bread crackles) Oh, symphony of crackle.”
--Colette, Ratatouille
We at Edible Skinny were recovering from our time at Burning Man (more on that later!!!) so we unfortunately missed the Baguette Battle LA 2016.  But we are delighted to announce the winner of Los Angeles’ evening of discovery of the city’s best baguette was François Hiegel of Bouchon, who has now become the official bread sponsor of Sofitel Los Angeles at Beverly Hills!

After two successful editions in New York and Miami, hundreds of Francophiles and Fine Cuisine lovers gathered this time in Los Angeles for the Baguette Battle, an evening focusing on crispy bread that crackles like a symphony.

Audience members from the event interacted with the bakers in the fashionably elegant Beverly Ballroom at Sofitel Los Angeles, which had been transformed into an expansive boulangerie with baguettes and breads of all sizes and flavors along with numerous options of French wine and cheese.  Event-goers were able to follow the jury's deliberations by tasting all the baguettes and breads as this Francophile evening unfurled.

Throughout the evening, seven judges had the difficult task of deciding the winners of a fiercely contested battle expertly set up for a blind taste test that judged each entry on six specific criteria, including flavor and the structure of the baguette.
French Consulate Christophe Lemoine had the honor of announcing the overall Grand Prix Award to François Hiegel of Bouchon to become the official bread provider for the Sofitel Los Angeles at Beverly Hills.  Antoine Winckler, Hotel Manager of Sofitel Los Angeles at Beverly Hills, awarded Ran Zimon of Bread Lounge the diploma for Specialty Bread.

So here’s to life being delicious, symphonies of bread crackles, and finally being able to take that perfect baguette bite.