On last Friday, Edible Skinny was lucky enough to attend our first Dope Dining Experience.  The event, was a cannabis infused Carnival dining experience that was a kickoff to the Las Vegas’ HIGH TIMES Cannabis Cup (and in our humble opinion, was much better than the actual cup itself)!
Dope Dining’s second all-inclusive infused experience was celebrated by YouTube stars such as Silenced Hippie, cannabis industry leaders, and marijuana enthusiasts.  The night was filled with infused sweet and savory treats, Carnival style entertainment (much of it unicorn themed as one of the night’s sponsors was the cannabis based PR company Social Media Unicorn), and live music.  Fun is a dish best served elevated, as patrons were able to enjoy sweet and savory edible treats crafted by Dope Dining private chef Marysia such as: White Chocolate Infused Bacon Topped with Magical Sprinkles, Empanadas with Infused Apples and Cinnamon, and Buttermilk Fried Chicken & Waffles Served with an Infused Maple Syrup.

As recreational use is legalized in more and more states (including California and Nevada), infused dining experiences will become more commonplace.   In California, MJU High Dining hosts a Sushi and Doobie Rolling workshop and Colorado’s Cultivating Spirits offers a three-course cannabis fine dining experience.  Infused dining has recently been featured in mainstream media such as VH1’s “Martha and Snoop’s Potluck Dinner Party” and Viceland’s “Bong Appetit.”

Featured edible brands at Dope Dining’s Carnival included the San Diego based Therapy Tonics, a cannabis iced coffee & tea brand made with the finest natural ingredients to give you that extra special feeling.  Therapy Tonics’ products are gluten free, solvent free, non-GMO, and contain organic ingredients.   Our favorite flavor profile was their Vanilla Caramel Coffee.   The delightfully delicious drink, and flagship
product, was developed as a tribute to the long-standing love affair people across the globe share with coffee.  This edible sativa shot contains the energizing power of caramel perfectly paired with the calming effect of vanilla and the percolating flavor of freshly roasted Arabica beans.

Another notable brand featured at Dope Dining’s Carnival was the San Diego based B. Edible, offering out infused cotton candy spun live during the event.  B. Edibles’ childlike wonder confections are made with organic ingredients and infused with lab-tested CO2 solvent-less extractions.  Whimsical flavors include Rose Petal, Juicy Watermelon, and Lavender.

Non-edible delights offered at the Carnival included a full service dab and flower bar, infused chair massage, face painting, a tarot card reader, and caricature artist.  Live singers and specialty artists were provided by the Las Vegas/Los Angeles based vintage cannabis cabaret company: The Green Light District.
Be forewarned, infused dining events are not for the uninitiated.  Knowing your dosing limits is a must.  The commonplace edible phrase, “start low and go slow” should be practiced as it is very easy to consume higher levels of THC than usual with delectably infused food.   Remember that edibles normally take anywhere between 20-40 minutes to take effect.

Although it might sound counter intuitive to most dinner parties you’ve been to, make sure to eat before you attend an infused dining event.   Empty tummies make the effects of cannabis happen quicker and in a more intense manner, so make sure to nosh on that apple before going.
But don’t get paranoid when it comes to infused dining.  If you happened to be overmedicated and need to counteract the psycho-activity of THC all you need to do is utilize CBD.  A few drops of CBD oil will take you out of your head and bring you back into your body.  And, naturally, make sure to drink plenty of water.
So if you find yourself invited to one of Dope Dining’s exclusive infused dining experiences make sure to attend.  Infused dining is an experience not to be missed, on any plane.
Here’s to life being delicious and to fun being a dish best served elevated! 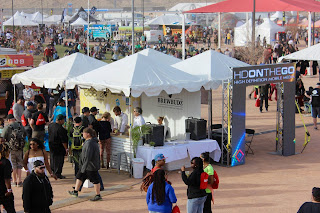 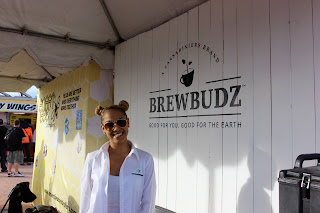 Here’s to life being delicious and to future recreational cannabis festivals not being as dry as the Moapa Paiute tribal land desert!
Posted by Kat Thomas at 4:37 PM 1 comment: