Food Forward's Voluneer of the Month: Me!

Food Forward is one of the most awesome food non-profits I've ever had the pleasure of working with (if you're new to Edible Skinny, they're a gleaning organization that in the course of 4 years they have gleaned 1.7 million pounds of fresh fruit and vegetables for the people of SoCal!) 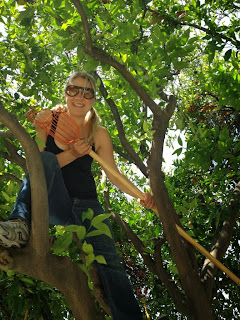 And this month I was honored to be there Volunteer of the Month!  Hooray!  Food Forward had some amazingly kind things to say about me!  Below's an excerpt:

There are only a handful of Fruit Loops who truly explore our org with multi-dimensional zest.  One such person is June’s Volunteer of the Month – Kat Thomas.  She started as a backyard harvester, joined up in the early days of the Farmer Market Recovery Program as a Glean Team Lead, and has since tabled for us, worked fundraisers, and even written about us for local media outlets.  All that great service aside, Fruit Prez Rick Nahmias’ fondest shared memory of Kat came late in 2011 when she joined him at FF’s first Christmas Day Pick.   On that 80 degree day, Kat brought along great Chinese food to share, which the crew enjoyed sitting in the Fruit Mobile.

If you want to read the whole post you can check it out at: http://foodforward.org/2013/06/volunteer-of-the-month-kat-thomas/

And if you're interested in volunteering for and/or donating to Food Forward wait are you waiting for check them out!?!
Posted by Kat Thomas at 2:00 PM No comments:

Wrote a travel article for the SM Observer on the MGM Grand and its new Grown Up ways! Enjoy!


Growing up Grand
The MGM Grand Evolves Into Adulthood

“Did you see that sign on your drive in here?  The one that said ‘Welcome to Las Vegas’?  Well, when you’re driving past it you gotta make sure to slow down and kick your conscious out the door.  Just make sure to pick it up on your way back outta town.”

Wiser words on the Vegas experience were never spoken then by Minnie (from Hazard Kentucky no less) at the buffet at the MGM Grand.
With nearly 40 million visitors hitting the Strip, Vegas is nothing if not a finely crafted land of indulgence.  It’s a place where every sense is entertained through the art bacchanalia.  A trip to Vegas is the physical embodiment of a Mulligan.  A Rumspringer.  It’s even in the town’s slogan, “whatever happens in Vegas…” well you know the rest.

My last trip to Vegas I stayed at the Tropicana, the epitome of old school Vegas.  This time around I indulged in the world of the newly revitalized MGM Grand, enticed by the newness of modern Vegas.  I'm a big fan of concepts, of the Big Picture, of the philosophies behind things.   And in Vegas this means the art of entertainment, an art form that is executed with perfect precision from sunrise to sunset to sunrise again.

When it was built in the 90s the Grand was sold as the “family casino” with a lion zoo exhibit (which never really inspired since lions sleep about 23 hours a day) and a lazy river.  But, as with everything in life evolution is necessary.

Turns out the Grand has grown up quite nicely.

The hotel and casino completed their $160 million room and suite remodel in the hotel’s main tower in late 2012 marking a major milestone in the resort’s “Grand Renovation.”  The remodel, which began in October 2011, includes 3,570 Grand King and Queen guest rooms and 642 suites of varying types including the Skyline Terrace and Skyline Marquee Suites.

With glorious glass views of the Strip and Tropicana Ave (a window washer will always make bank in Vegas) and rooms awash in a color palette of jewel tones, bronzes and charcoals, large or small these rooms are a great place to chill out whatever your state of partying.

Another huge progression in the Grand’s evolution into adulthood was the opening of Hakkasan Las VegasRestaurant and Nightclub in late April.  With Hakkasan outposts already in New York, Miami, London, Mumbai, Dubai, and Abu Dhabi this upscale "modern Cantonese” dining experience is for the first time ever combined with multiple nightlife components from Angel Management Group, one of Las Vegas’ preeminent nightclub operators (the company that owns Wet Republic, Pure, LAX among other Vegas venues).  This five story, 75,000 square feet of space, is located where Studio 54 stood for 14 years (along with those sleeping lions) and it’s a venue that has already revolutionize the Las Vegas market.  Even before opening Hakkasan was already infamous for buying all the major DJ contracts on the Strip (our condolences to the Wynn).

The fifth floor houses Hakkasan’s nightclub two-story main room and it’s something not to be missed.  Similar to the Sahara tent at Coachella the table setup is stadium style.  Booths are elevated, allowing partiers to see the club from every angle.  The main room’s high-res LED cobweb, which traces the full length of the ceiling, pulse and glow throughout the show, the first of this caliber in Las Vegas.  The room can sectioned off into four separate environments for a space that can house up to 4,000 people or can be partitioned to be a super intimate space for 200.

The night we were there Dutch DJ Tiësto spun from one in the morning till close. Tiësto (who’s also the face of Guess right now) has been a global powerhouse DJ for the last ten years, he has been ranked in the #1 poll position 3 times in DJ Magazine’s Top 100 Popularity Poll along with being the first DJ to perform live during the opening ceremonies for the Olympics during the Athens Games in 2004.  Along with Tiësto, Hakkasan’s residencies include Calvin Harris, Deadmau5, Aoki, Avila, Bambi, more.

It’s no secret that Vegas clubs are primarily about the scene (the night we were there the line was hours long), but they’re also about being entertained to the nth degree.  Ten dancers removed sultry clothing during the show and money literally rained from the ceiling (not a bad thing considering bottle service starts at $12,000 and goes up to half a million dollars).

These DJ residencies translate over to the daytime with Wet Republic, otherwise known as the ultra-pool at MGM Grand. The pool has also been overhauled as part of the “Grand Renovation.”  This daytime pool club packs thousands of revelers into two saltwater pools, plus lounges, daybeds, cabanas, and bungalows.

With most of Haakasan’s DJs playing on the weekends the Grand’s expanded DJ booth sits under massive new LED displays with special effects, and the marble bar now stretches for 95 feet.  And for those not willing to pay a cover charge for their sunbathing and the Grand has a total of 6.5 acres of poolage open to hotel guest which includes 4 pools, 3 Jacuzzis, and that now adult oriented lazy river.

But regardless of how you chose to entertain yourself in Sin City via the Grand (with bedazzled rooms, ultra nightclubs, or a pools that won’t quit) don’t forget to grab that conscious on your way back outta town.

Kat Thomas is a writer who appreciates every aspect of the world of entertainment.  You can find out more of her adventures on her food blog edibleskinny.com and her art blog picsofpeps.com
Posted by Kat Thomas at 6:19 AM No comments: