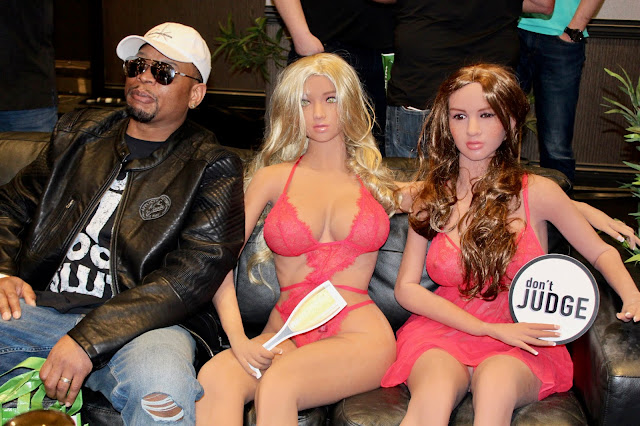 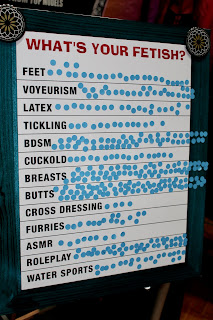 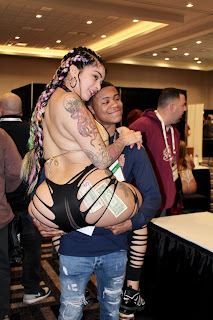 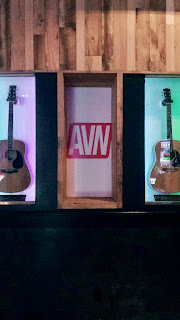 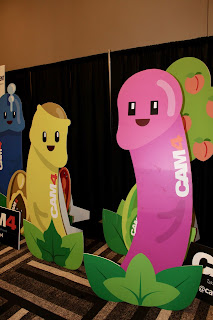 Kat Thomas is the Editor in Chief of Edible Skinny, a site dedicated to making your life postcard worthy. She is also the CEO of the creative media company This Way Adventures. You can find more about both brands at http://www.thiswayadventures.com
Posted by Kat Thomas at 12:38 PM No comments: 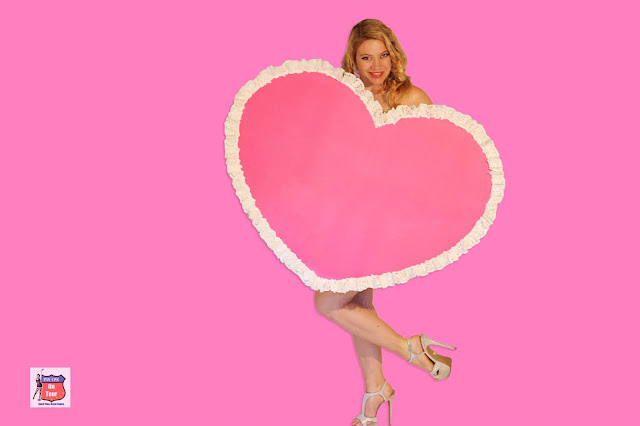 “There are never enough I LOVE YOUs.”
--Lenny Bruce, Comedian 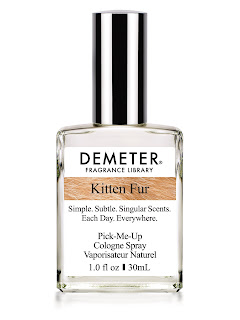 Lenny Bruce said it ABSOLUTE BEST!  Because the most important part of Valentine’s Day are the I LOVE YOUs.  The I LOVE YOUs to your significant other(s), your family, your pets, and MOST ESPECIALLY to yourself.  Now, I could write another two intro paragraphs for this Valentine’s Day Product Guide, but really all I want to do is keep mentioning FAB LOVE quotes.  You see some GREAT people said it much much better than me!  ;-)

But before we get to the quotes… if you’re still looking for some FUN and FLIRTY V-Day gifts to augment your I LOVE YOUs, below are 5 suggestions that we here at Edible Skinny ABSOLUTELY ADORE!!!

FAB Quote #1:
“Some LOVE stories aren’t epic novels some are short stories, but that doesn’t make them any less filled with LOVE.”
--Carrie Bradshaw

FAB Quote #2:
“Nobody will ever win the battle of the sexes.  There’s too much fraternizing with the enemy.”
--Henry Kissinger

FAB Quote #3:
“All you need is LOVE. But a little chocolate now and then doesn’t hurt.”
--Charles Schultz

Here’s to life being delicious, all your moments being postcard worthy, and I LOVE YOUs all the time! ;-) 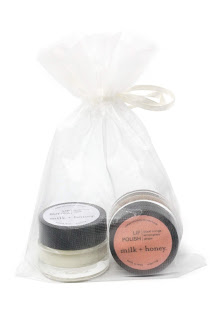 DEMETER FRAGRANCE KITTEN FUR
Everyone LOVES Kittens!  But unfortunately certain boyfriends are allergic (I’m talking to you Matt Bourquardez!) or your apartment doesn’t allow them.  Luckily Demeter has captured a fragrance that truly purrrrrrrs.  After 15 years of effort, this New York based fragrance company has created the olfactory essence of a baby cat aka “kitten.”  All the warmth, powdery softness, and comfort of that purrfect spot, just behind a kitten's neck.  So grab a bottle of Demeter’s Kitten Fur and leave the Benadryl behind! ;-)
https://demeterfragrance.com/

MILK + HONEY LIP DUO
The best way to have a two hour kissing session is to have kissable lips.  Enter Milk + Honey, a Austin based handmade beauty product line that is toxin-free, organic, and plant-based.  Their Lip Duo (containing their Lip Polish and Lip Butter) is the perfect pair to prep for puckering up!  Made from Vanilla, Cardamom, Blood Orange, and Lemongrass, the Lip Polish buffs away dryness and provides a soft canvas for any lip color.  Finish your mouth prep with their Lip Butter for a silky pout with a delicate, natural shine.  The perfect solution for hours and hours of smooching!
https://milkandhoney.com/ 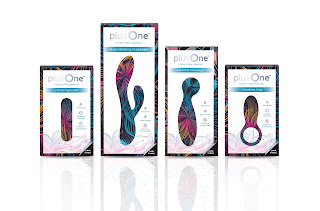 This is ABSOLUTELY PERFECT for the Techie traveler in your life looking for more airline seat space.  The Airhook is a revolutionary two-in-one solution for airplane travel: a stable drink holder and a secure mount for an electronics device.  Designed to elevate the level of comfort and convenience for airplane travelers, allowing for maximum legroom, The Airhook uses the tray table in its vertical locked position as an anchor, rather than horizontally as a platform. Travelers no longer need to sacrifice space with the folding down trays!   Something a certain 6’3” foot boyfriend would have definitely appreciated on our 10-hour flight to Amsterdam last year! ;-)
https://theairhook.com/ 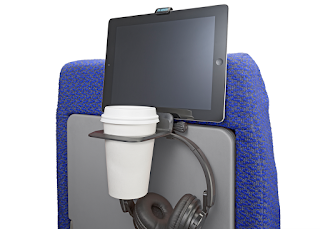 PLUSONE VIBRATING RING
What Valentine’s Day is complete without a bit of SEXY SEXY time?  Now there’s tons of sex toys on the market but the cool thing about plusOne, a collection of adult pleasure products for quality-seeking yet budget-minded customers, is that they’re taking adult playtime into the mainstream marketplace.  That’s right you no longer need to procure your toys at a scuzzy roadside jerk hut (or the Internet)...  Since hitting the shelves in early-October, the brand has already sold nearly a quarter of a million devices in the U.S in big-box retailers such as Walmart and Amazon.  Our favorite is their Vibrating Ring: the snug-fitting ring that enhances his size while adding sensual vibrations for both partners.  The inviting (not scary at all) plusOne ring is made of super stretchy body safe silicone and has 10 vibration settings.  Portable and discreet, it’s perfect for precise stimulation.  And the fully waterproof ring is perfect for play in the bath or shower.  So let the games begin!
https://myplusone.com/ 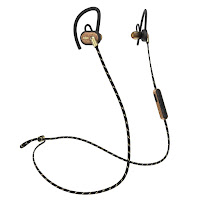 Music is one of those universal presents, the ultimate gift of changing one’s good vibrations to even better good vibrations.  The House of Marley Uprise are Bluetooth wireless sports earphones that gives you the ability to make those Beach Boys sounds mobile.  Made of natural wood fiber and recycled PP composite the earphones have an 8-hour battery life (unlike some wireless headphones that die after 2 hours…) and a travel case made from recycled water bottles.  They’re also SUPER DUPER quick charging (which is A BIG DEAL when you realize you didn’t charge them and you want to go to the gym right now...).  Uprise even has a travel case made from recycled water bottles.  So get ready for those Good Vibrations that you need for your marathon training to be more mobile! ;-)
https://www.thehouseofmarley.com/

Kat Thomas is the Editor in Chief of Edible Skinny, a site dedicated to making your life postcard worthy.  She is also the CEO of the creative media company This Way Adventures. You can find more about both brands at http://www.thiswayadventures.com 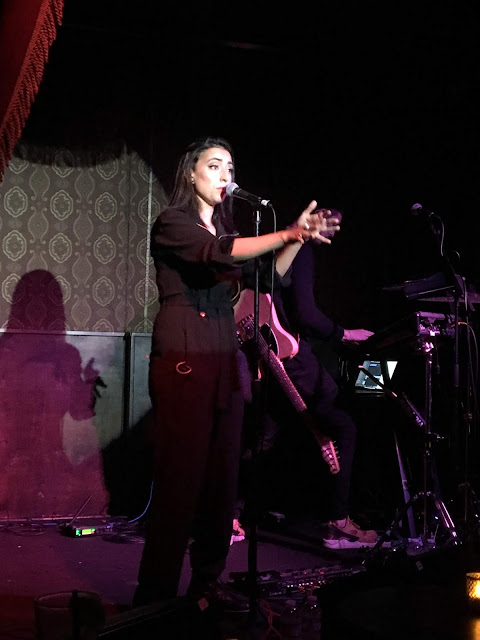 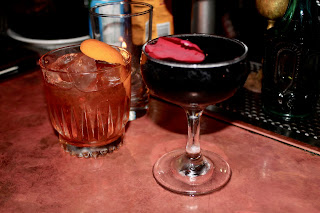 Named one of the Best Bars in LA by Vice, the fraternal twins’ magic-themed speakeasy (they are REALLY into speakeasies!) Black Rabbit Rose, features a short and sweet craft cocktail list with a stage that features rising pop stars, contortionists and illusionists, and burlesque shows.  (Oh and sometimes it’s also a Thai restaurant...).  While there I sipped on a Dark Arts cocktail (Lemongrass Vodka, Lime, Aloe, and Activated Charcoal), afterwards I was ready to join team Slytherin! 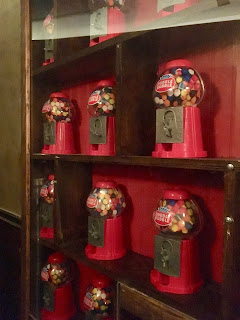 Songs played during No/Me’s half hour-ish set included her first dropped single: Consistent, a track that was inspired by No/Me’s recent attempt at online dating.  Her lyrics are a checklist of issues: she’s a skeptic, a cynic, a neurotic, a narcissistic, and a freak who’s “got the best intentions.”  Consistent is also featured on the recently announced FIFA 19 soundtrack, among the likes of Childish Gambino, Gorillaz, Logic, Billie Eilish and more.  No/Me’s vocal vibe is breathy raspiness with a WAHLOP of emotionality in every lyric delivered.  While studying at UCLA, No/Me double majored in musicology and music industry, while balancing nighttime gigs with her previous rock band.  Another breakout song was Savior, “Fuck the fairytales and your princess dreams.  I’m gonna give you hell like a killer queen.”  And with more FAB performances like this No/Me is definitely on her way to being a killer queen.

After the performance it was time to sneak into another Houston space: Madame Siam Sideshow Emporium, the adjoining speakeasy (like I said…) whose theme focuses on the classic American traveling carnival, by way of the Donald Trump Silk Road.  With a secret door backdoor gum-ball machine entrance, there’s a something for every carney lover out there: a ball toss at Donald Trump and Kim Jong Un, an in house Tarot Card Reader, ironic gum-ball options (such as “Pretty Fly For a White Guy”), and corndogs being slung from a chuck wagon.

Here’s to life being delicious, all your moments being postcard worthy, and being a killer queen at a Houston speakeasy! ;-) 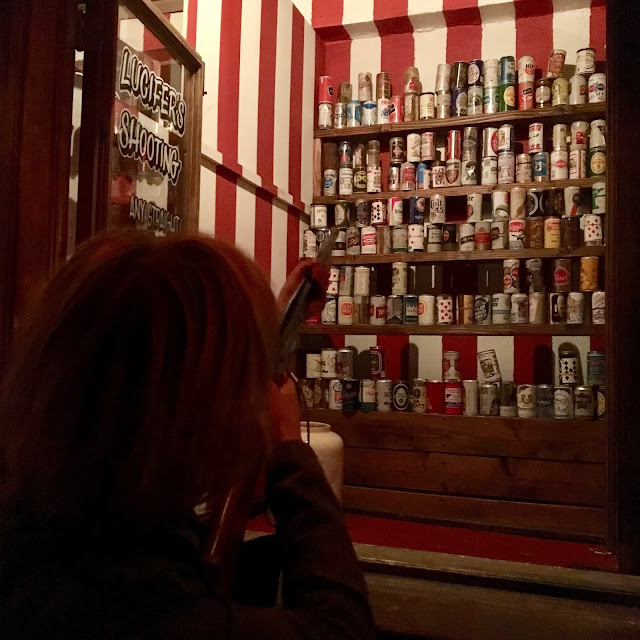 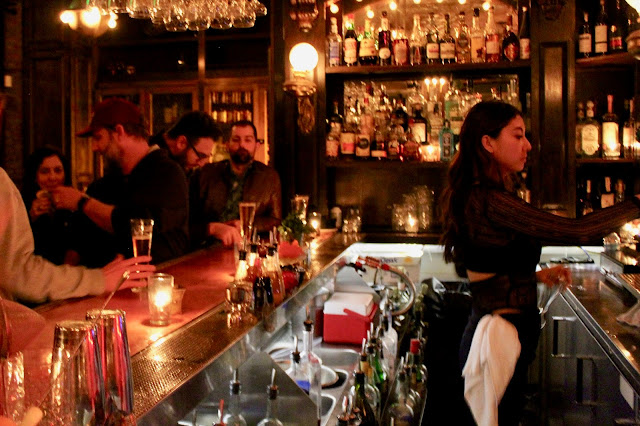 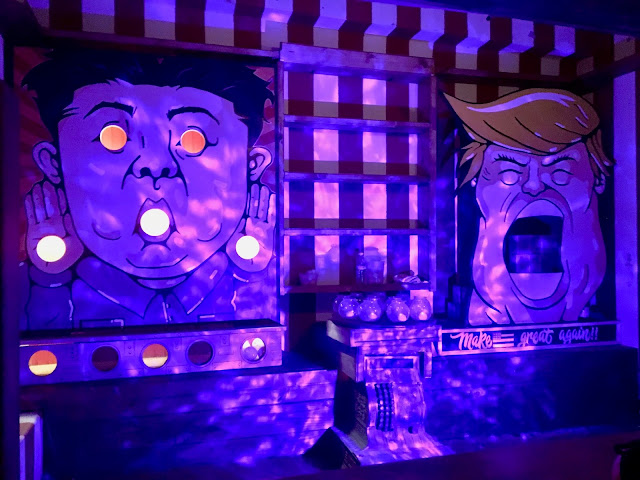 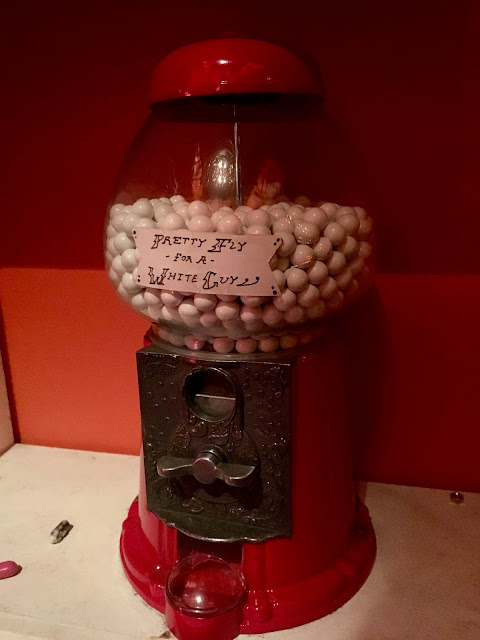 Posted by Kat Thomas at 3:36 PM No comments: