If there’s one thing the western side of the Big Island is known for it’s coffee, Kona Coffee to be specific!  Hawai'i is the only state in the US to commercially grow coffee; and among the islands, only the Kona district grows this caffeinated treat.


Kona Coffee actually celebrated its 200th anniversary last year.  This thriving industry began in 1813 when King Kamehameha’s (the warrior-king who unified all the islands of Hawai’i) Spanish interpreter and physician, Don Francisco de Paula y Marin, planted the first trees on O’ahu.  A few years later, the Rev. Joseph Goodrich brought the trees to the Big Island before missionary Samuel Ruggles planted the first Arabica trees in the western side of the island in 1828.


Coffee prefers shade and dry, cool summers so it did well on the Big Island’s volcanic slopes where clouds sweep in during the afternoons, and ocean breezes temper the tropical sun.  Kona Coffee is known to have a finish with floral notes with hints of peach, plum, and chocolate.

Although Kona coffee has been around for over two centuries, it did not became popular among connoisseurs until the 1980s (which worked perfectly for the farmers of Hawai’i as it was the same time that sugar cane farming was beginning to phase out).

Harvesting occurs year round and yields some of the best cherries (the red colored coffee beans) in the world.  But because the cherries must be picked by hand in the rugged sloped coffee terrain (some of which is grown as high as 3,200 feet above sea level) it has a tendency to translates to higher labor costs (to generate a sellable pound of coffee beans requires 7 pounds of cherries) which translates to high coffee costs (the beans usually run between $30-$50 a pound).

The process starts with a pulping machine that removes the tiny beans at the center of the cherry (usually there are two beans facing each other in a cherry, although occasionally one bean fails to divide leading to a high prized peaberry!).  Then the beans ferment in water and followed by being placed in drying racks in the sun.   Finally the beans are milled to remove the parchment skin, with the remaining green beans to be graded and roasted.


The majority of Kona’s 600 coffee farms are small, family-run operations of 2-5 acres although there are a few larger farms (such as Kona Mountain Coffee).


for over a week now as part of an organic farmstay and let me tell you Hawai’i is really another world!!!

The Big Island is the largest of the seven Hawai’ian island (around the size of Connecticut or twice the size of all other Hawai’ian islands combined), but only has a population of about 160,000.   Although Hawai’i Island is full of barren lava fields, the majority of the state’s agricultural products are grown and processed here.

The hip little enclave of Hawi is only about an hour drive north of Kona, but this upcountry hamlet (with a population of slightly more than 900) is worlds away from its neighboring “city” (which with a population of 35,000 it’s hard for this Los Angeleno to considered Kona a city…)!

Nestled on the northern most point on the island, it's a town that’s a block long, Hawi is full of supportive organic farmers who sell their wares at the local farmers market and at “Honor Stands.”

Honor Stands are exactly what they sound like: farm stands where fresh fruit and vegetables are sold daily and where payment is made on the honor system.  At night you don’t even leave money, but instead write down your name and phone number.

Choices vary according to what’s in season but in the last week I’ve had the ability to explore four different types of fruits that I had never even heard of till I came to Hawi!

Langsat
These tiny, yellow, orb shaped fruits grow in clusters and can be quite sour when unripe, but are perfectly sweet when ripe with flavorings similar to an orange and grape.

Lilikoi
The passion fruit plant produces a spectacular flower with yellow of purple fruit (where I’m staying it’s yellow!).  Seeds of the purple varietal were first planted on Maui in 1880by Eugene Delemar who brought them from Australia and planted them at his ranch in an area still known as “Lilikoi Gulch.”  Flavor profiles include similarities to mangos, papayas, pineapples, and lemons.

Soursop
Although the outside of this plant is green and prickly the inside of this fruit is similar to the flesh of uncooked Halibut (in a good way!)! The flavor is a combination of sour citrus, pineapple, and strawberry with an underlying creamy texture similar to a coconut, banana or cherimoya.

Rambutan
Similar to lychees, rambutans are covered with soft spines.  Indigenous to the Malay Archipelago, the name of the fruit comes from the word “hairy” in Malay.   And you can definitely see why from the picture!  Once the hair exterior is peeled away (most people chose to give the fruit a slight bite with their teeth to break the skin) the tender, fleshy fruit offer a balance of sweet that is similar to larger white grape.
Posted by Kat Thomas at 12:03 PM No comments: 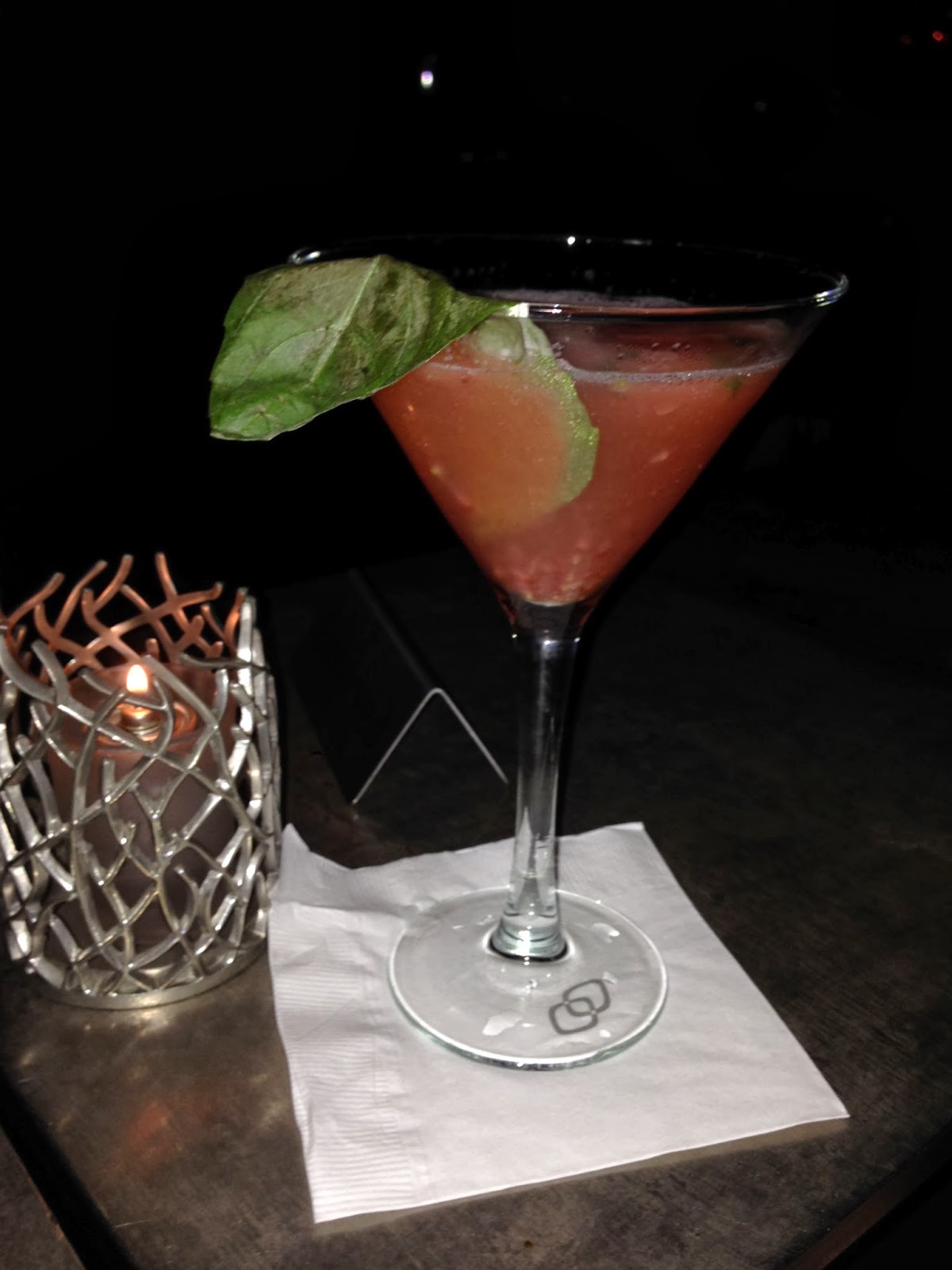 A few weeks ago the Thomas Gals were invited to spend a Friday night at Riviera 31 at the Sofitel Los Angeles to check out the beats of the residency of Trinidad Senolia. 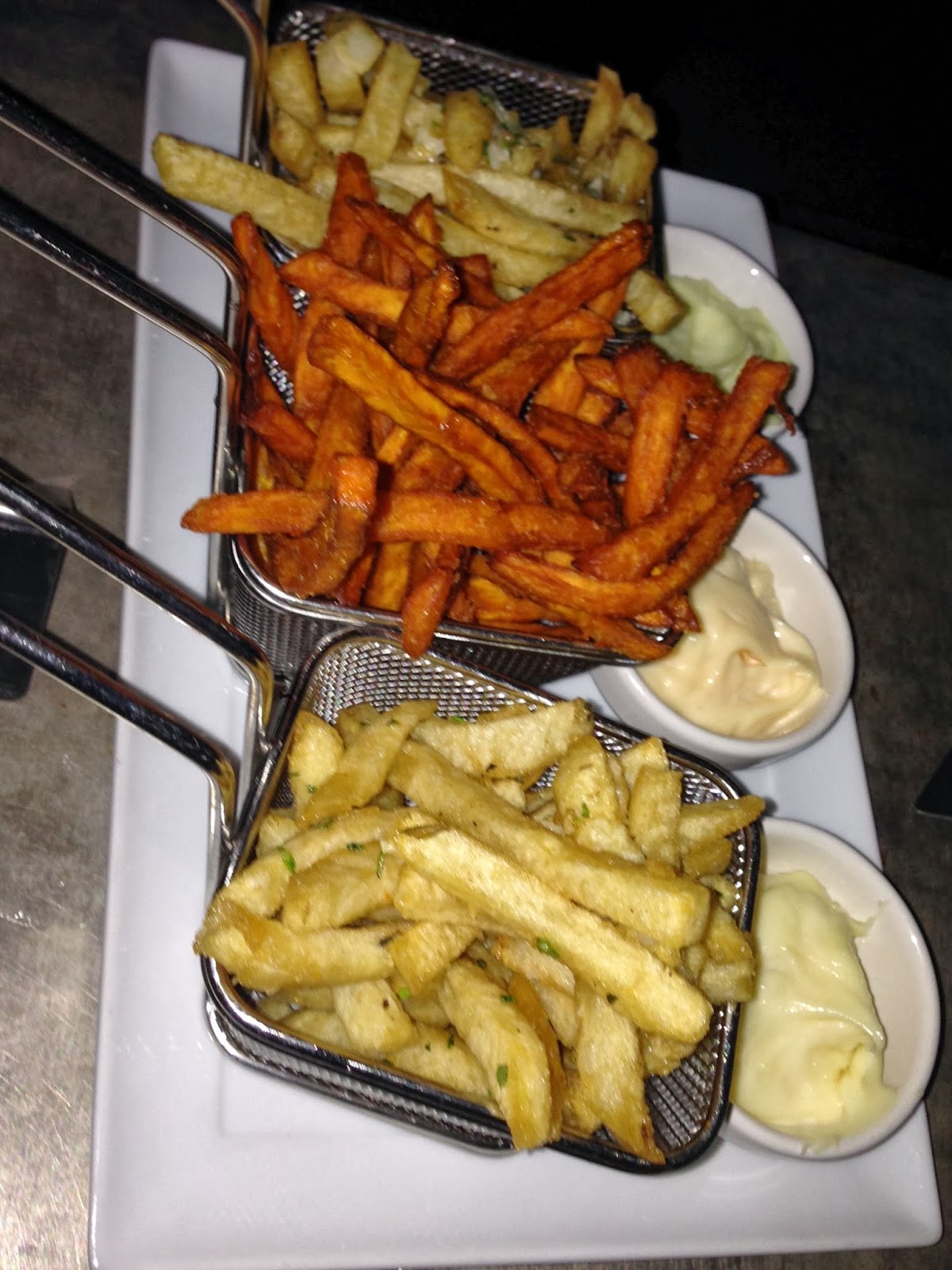 Trinidad Senolia are the nom de musique of Garth Trinidad (KCRW DJ extraordinaire who has introduced the world to such artists as Little Dragon and Janelle Monae) and Mateo Senolia (pseudonym for novelist / screenwriter, Marcus J. Guillory).

They are hosted by Xperiment USA (who presents live musical performances, DJs and burlesque six nights a week at the Sofitel).  On Friday nights Xperiment focuses on (House Disco Garage), a weekly musical celebration that takes guests on a deep, refreshing, and incredible journey of sounds for which Trinidad Senolia started their residency on January 24th. 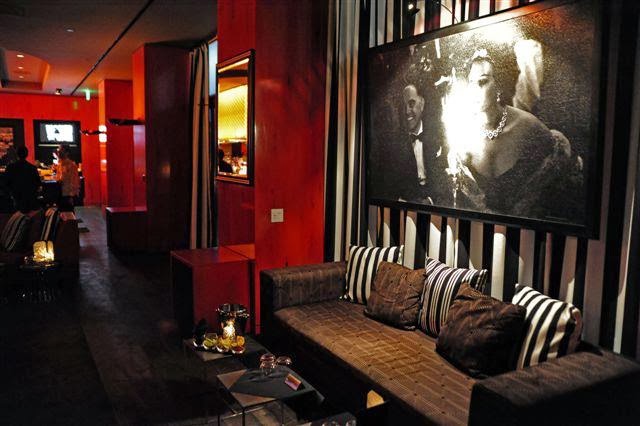 The vibe of Riviera 31 is a sophisticated cocktail lounge with a Mediterranean-style menu. The Hip Hipster clientele is matched by a red and black decor which takes visitors on a visual journey through the evocative history of the French Riviera through black and white photographs.  The venue's name, Riviera 31, reflects two states of geography: Riviera (South of France) and 31 (California, 31st State).

Chef Matthew Biancaniello, tasted like Italy in the summertime!

So for binaural beats and Basil Martinis Riviera 31 is the place to be.