Banksy's 'Sirens of the Lambs' Approaches the Factory Farming Issue with Puppets!


Leave it to elusive British artist Banksy to increase the dialogue on factory farming in an ironically cute postmodern way!

Premiering on October 11th, the Sirens of the Lambs is moving puppet sculpture that will be driving up and down the streets of New York, especially in the Meatpacking District, for the next two weeks!

Housed in a slaughterhouse delivery truck, the animals' faces are Muppet adorable, but the truck emits loud squeaky screaming noises that indicates the creatures are in en route to their imminent doom. 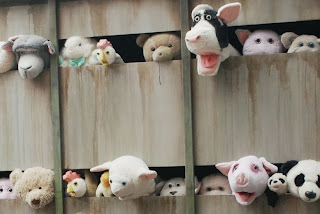 According to an audio guide on Banksy's website, the animals' heads are controlled by a team of mime artists inside the vehicle.  The guide jokes: "This is a piece of sculpture art, and I know what you're thinking: isn't it a subtle?"  He continues, that it is either "making some sort of comment on the casual cruelty of the food industry" or forging "an attempt at something vague and pretentious about the loss of childhood innocence."

"The truck contains over 60 cuddly soft toys on the road to a swift death.  However, in order to bring them to life, four professional puppeteers are required, strapped into bucket seats, dressed entirely in black lycra, pulling on an array of levers with each limb and given only one toilet break a day; proving that the only sentient beings held in lower esteem than livestock are mime artists."

On the flip side, Banksy also announced yesterday he set up an art stall Central Park this weekend manned by an octogenarian.   Banksy's works normally sell for hundreds of thousands of dollars, but these signed pieces were priced at $60 a pop.   Banksy said on his website it took about four hours for the elderly man to have his first sale.

He also noted, "this was a one off. The stall will not be there again today."