The Wallace: Where Main Street USA Meets the Exoticness of a Casablanca Night 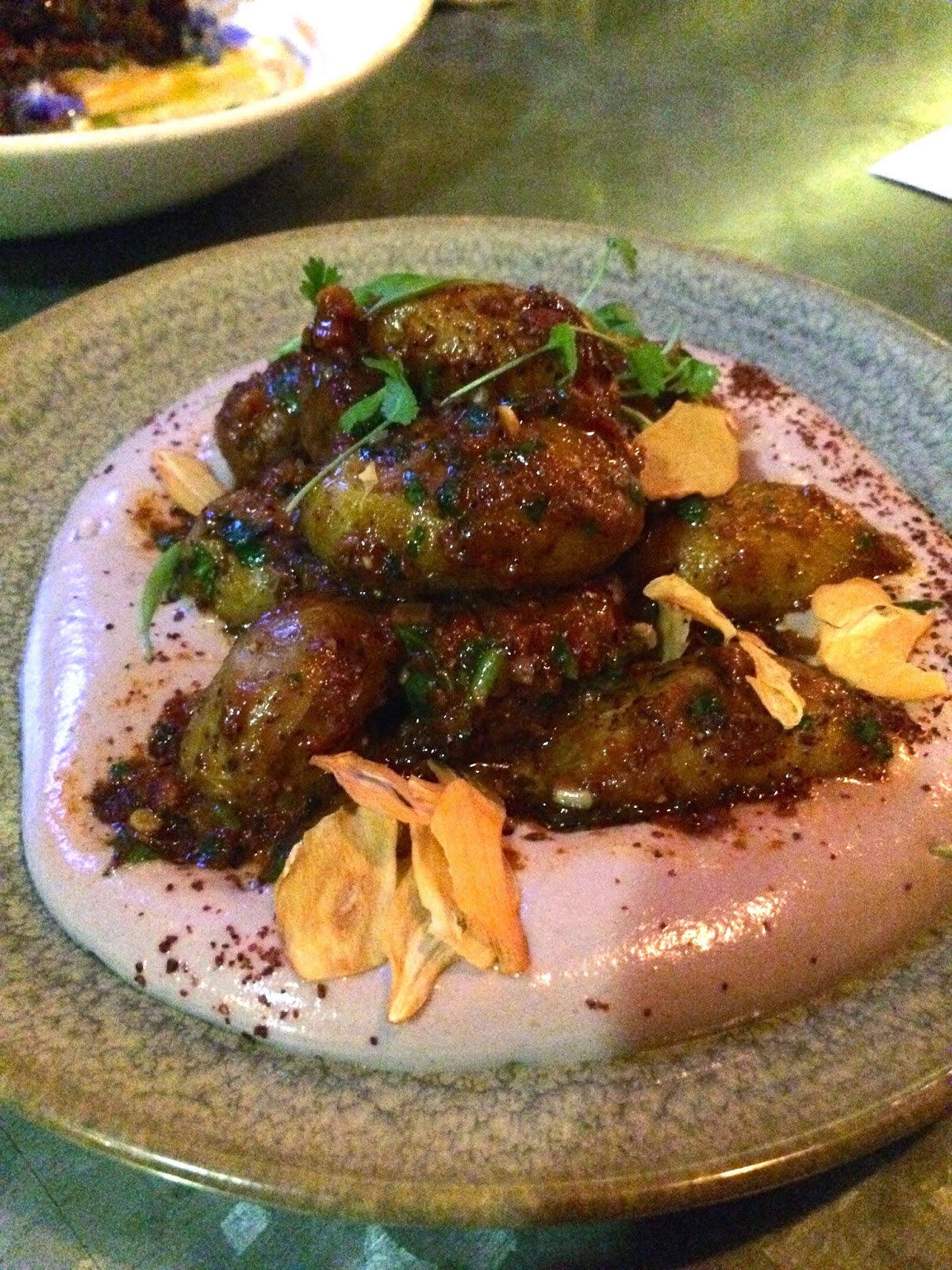 Edible Skinny was lucky enough to check out the newish Downtown Culver City hotspot The Wallace a few weeks ago. 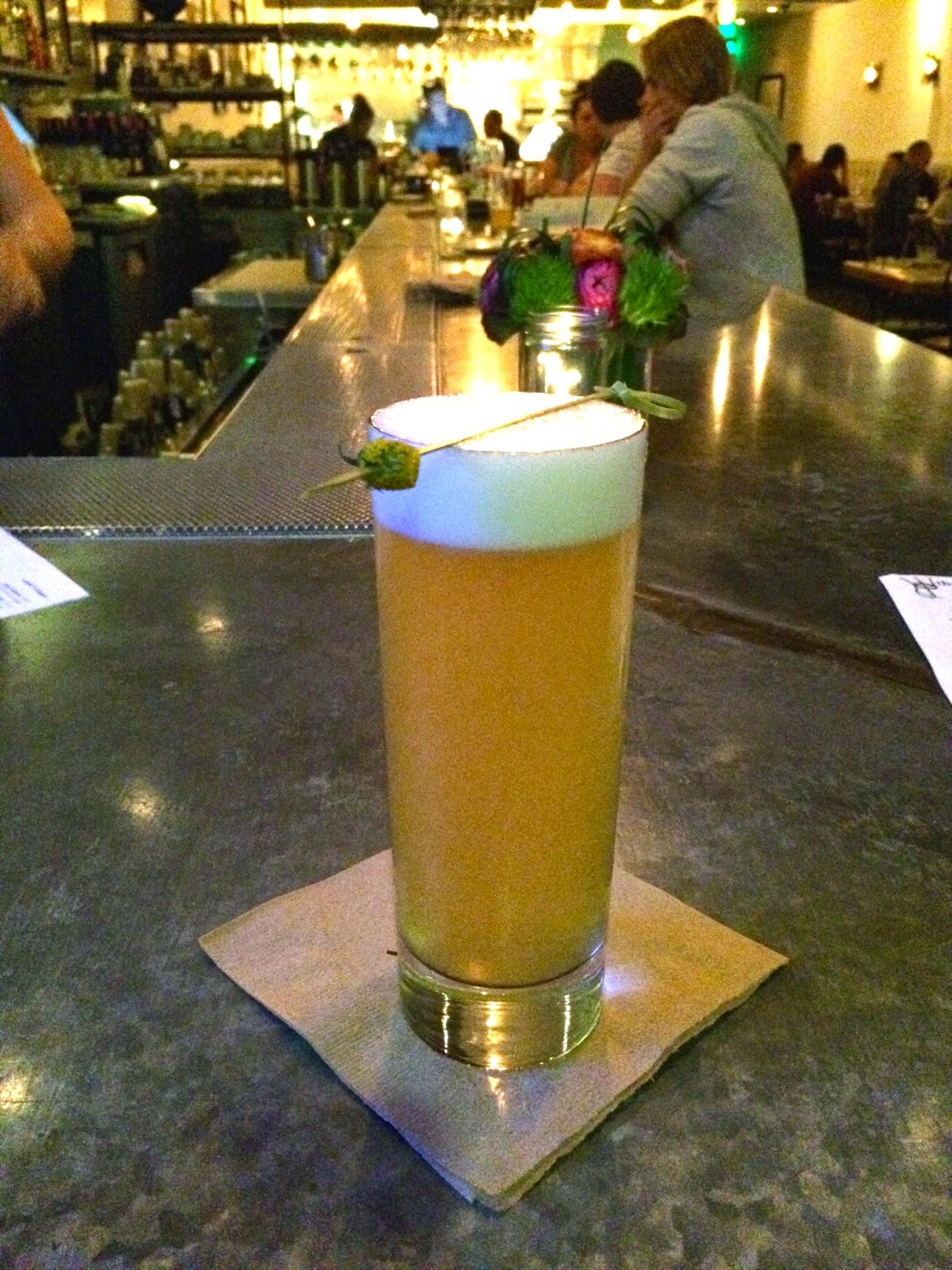 Although it’s been open for just over a year The Wallace has already established itself as one of the most innovative restaurants on Main Street.   Serving locavore, sustainable fare inspired by the seasons, The Wallace has an underlying philosophy that food should be thoughtfully executed, from start to finish.

The drinks, bestowed the adorable nickname of “Tipples” on their menu, are separated into three defining categories: Citrusy, Effervescent, and Cocktails (though technically the other two categories are also cocktails…). 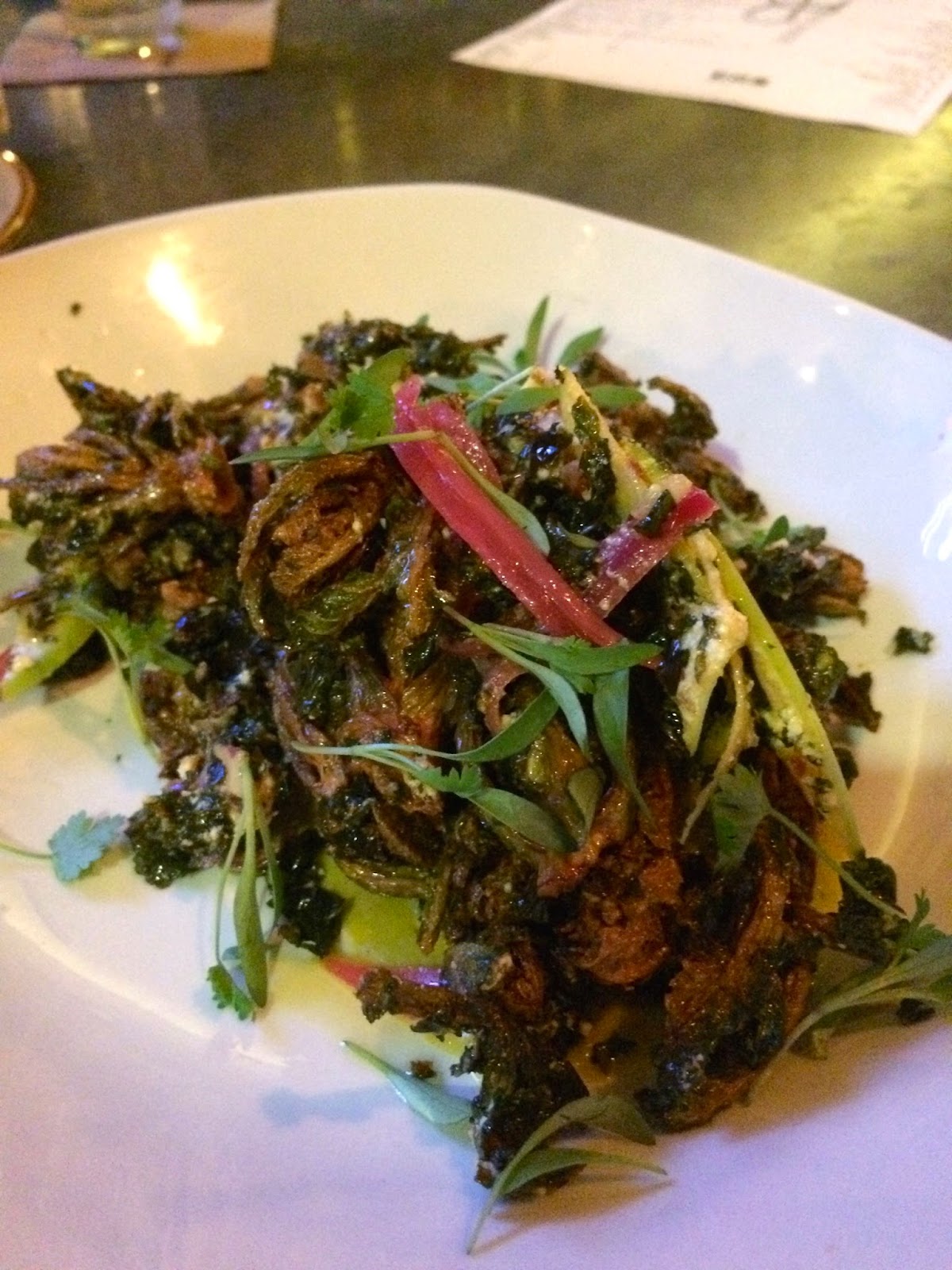 The first drink we sampled was the Rebel with a Cause comprised of the intriguing Selvarey Blanco, Fresh Pineapple, Lime, Chamomile, Three Weav3ers IPA and topped with a Buzz Button.  If you’ve never had a Buzz Button you’re in for an experience!  It’s a flower bud that has a grassy taste to the tongue followed by a tingling numbing sensation, excessive salivation, and a cooling sensation in the back of the throat.  It also opens up your taste buds as wide as a set of eyes in a Margaret Keane portrait so whatever enters your mouth is a symphony of flavors...  Definitely not to be missed! 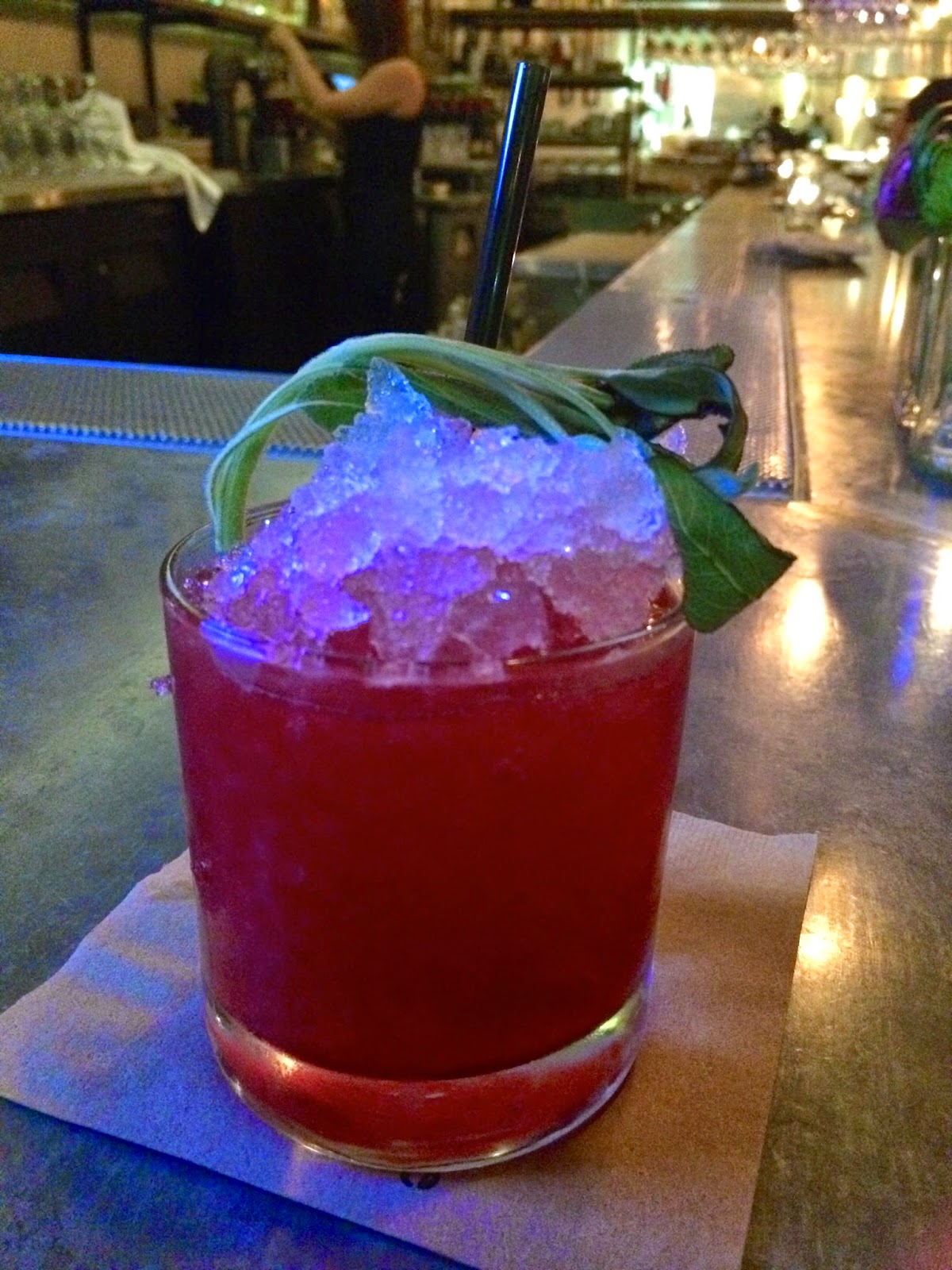 With the new addition of Executive Chef Joel Miller The Wallace’s retooled small plates menu hints at the aromas and spiciness of a Lebanese beach.  We started with the Lollypop Kale with carrot salsa, pickled red onion, ricotta, currants, apple ($13).  Fried crispy, yet with its healthiness still preserved it was delightful.  This was followed by Pee-Wee Potatoes featuring Purple Potato Espuma, Mahammara, Cilantro, and Dehydrated Garlic ($12).  Espuma, for those not up to speed on their foodie lingo, is also known as a thermo whip is usually used to make these foams through the making of a stock, creating a gel, and extruding through the N2O canister.  You haven’t lived till you’ve had purple potatoes this way! 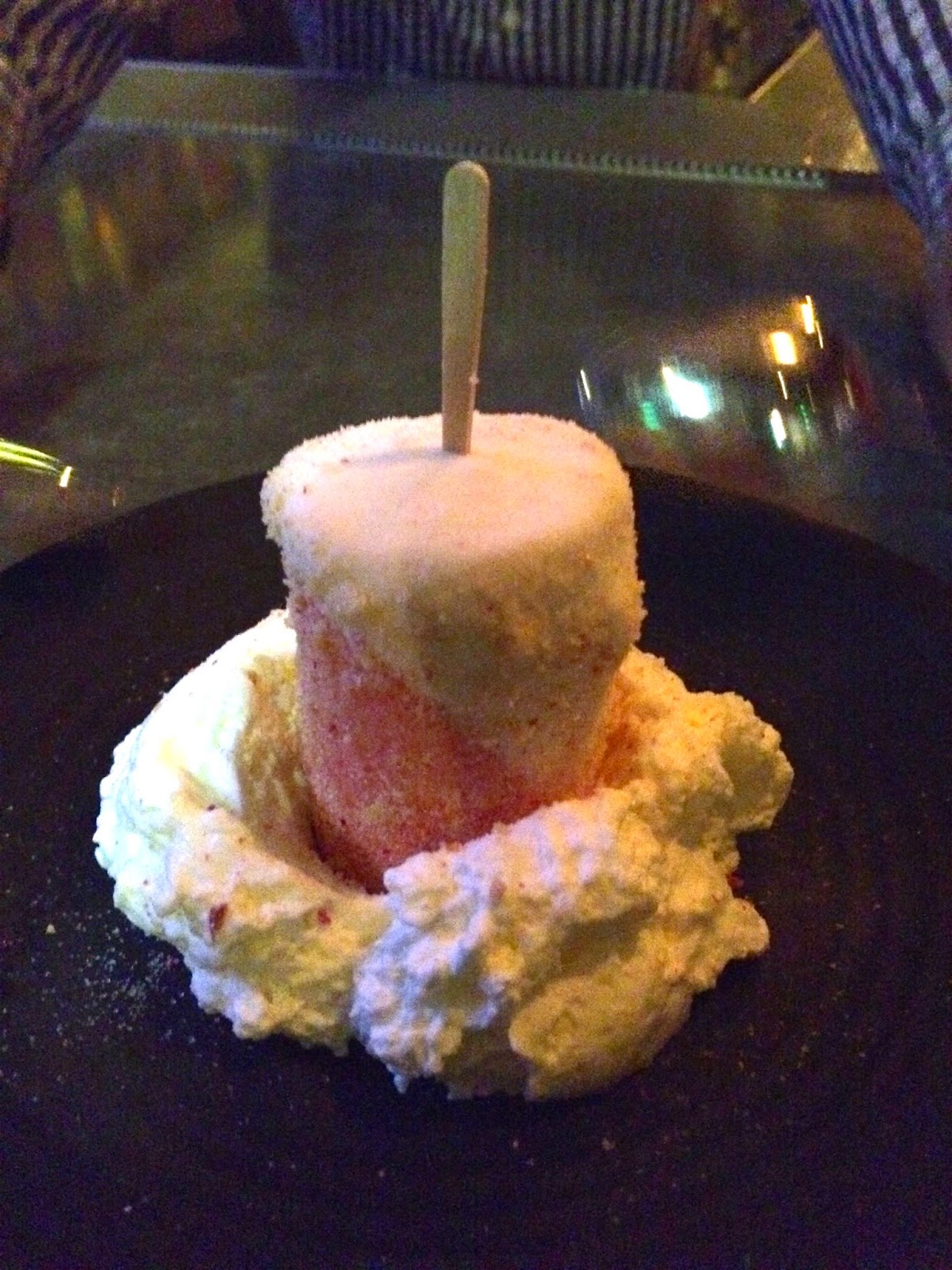 Our next food round include some Roasted Sunchokes with Red Bell Pepper Vinaigrette, Labneh, Turmeric Oil, Sumac ($12), that I didn’t participate in because I’m a Veg (but looked super lovely).  I did although meditate on the Mushroom Ragout with Crispy Polenta Shaved Parmesan and Madeira ($15) who’s density definitely rivaled its richness.

We finished the meal with a Blood Orange Parfait which is composed of Whipped Buttermilk, Glaze, and Blood Orange Sugar ($9); it tasted like a grown up version of a push up pop: all the fun of summers of yesteryear, yet with the complexity of adulthood.  Yummm!

So if you’re looking for the casualness of Main Street USA crossed with the exoticness of a Casablanca night, The Wallace is the place to go!