I know a bunch of reprints at the moment (thanks again courtesy of Santa Monica Observer), but this is also timely since today (Tuesday night) is Food Truck night in Santa Monica. So if you're into Food Trucks (and what Angeleno isn't???) go check them out (it's for a good cause!) 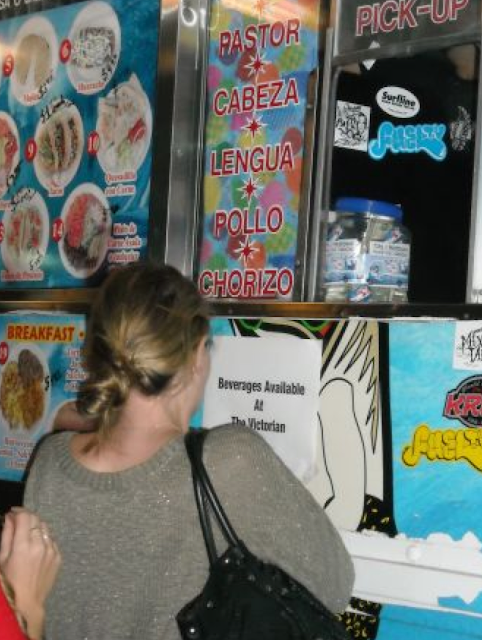 Finally! Food Trucks in Santa Monica! (And Saving the Day for the Californian Heritage Museum!)

By Kat Thomas
Perhaps you’ve heard the news, but Gourmet Food Trucks have finally made it to Santa Monica! Thanks to a temporary three month permit, from 5:30-9:30 at the California Heritage Museum and Victorian parking lot (home of the Sunday Santa Monica’s Farmers Market) the residents of Santa Monica can enjoy such exotic fare as Cubano Sandwiches, Vietnamese Pho, and Don Draper flavored ice cream (comprised of Vanilla, Bourbon, Carmel, and Smoke!) And although the event has been rained out twice since starting a little over a month ago, there’s nothing but smiling faces on the friends of the California Heritage Museum as this event is helping financially save both it and its Main Street neighbors.

“About six months ago we began working to have Food Trucks in our parking lot on a day of the week that Main Street is typically very very quiet,” explains Tobi Smith, Director of California Heritage Museum. “It was suggested first to our staff and then to our directors that having these Gourmet Food Trucks would be a non traditional means of supporting museum, but also support the Main Street merchants.

The Heritage Museum has tried very hard from the being to have the approval of the neighborhood, making sure to get the support of the Main Street Merchants Association and Ocean Park Association. “We did some research on other areas that were already offering Food Truck evens, such as Abbot Kinney’s on First Fridays. And discovered that a good amount of people ended up dining in restaurants and going into stores because a lot of people don’t want wait in line,” explains Smith.
Tuesday nights are normally very sleepy on Main Street, especially in this economy, but two weeks ago (since last week’s event was called due to inclement weather, a continuing chagrin for the museum who was hoping to start their offerings during the summer’s sunny skies) restaurants in close proximity to the event such LaVecchia, Lula, and Finn McCool’s were definitely bustling more than usually.

Everyone has a different take on how to enjoy the trucks. A hipster couple on a date might use the trucks as a source of appetizers and then go somewhere else for the main course. A group on a double date might dine at the trucks for dinner and then end up at the Galley for dessert. And some people just look at it as the ultimate option in take out. “My brother who lives nearby comes to the lot, buys the food, and takes it home, so he doesn’t have to worry about cooking,” notes Smith. And along with the benefit to the nearby restaurants the museum is also hoping for a spillover to retail side of Main Street. “If we can bring a lot of people to the street than the Main Street stores might keep their doors open later in the future,” states Smith.

And for those who are not residents, there are a many reasons for the Food Truck followers to make Santa Monica their destination choice, such as the comfy al fresco dinning. “Instead being forced to stand up while eating,” explains Smith, “you can picnic on the museum’s lawn (as long as it’s not raining); we’ve just put new lighting so it’s now very well lit out there.” Another great perk of the Tuesday night Food Trucks is the option to imbibe alcohol. “You can go out to the Victorian and can actually get a beer or wine to enjoy with your meal.” Definitely a perk for the wine loving SoCal crowd. And for those who fancy another drink afterwards, there is the option of going downstairs to the Tavern, the basement bar at the Victorian, and enjoying their offerings.

The Gourmet Food Trucks are somewhat of a litmus test for the Heritage Museum into nontraditional forms of fundraising. “Times are tough for everyone. We normally have the Heritage Award dinner in October but we already knew ahead of time, that with the economy being what it is, we didn’t have enough people for it to be profitable for us so we decided to push it to the Spring of next year.” In the past, ironically, the one day of the week that fully features the museum, the Sunday Santa Monica Farmers Market, has also caused the biggest financial obstacle. Because of the business of the market there is a lack of Sunday parking for the California Heritage Museum, typically the most popular day for museum attendance. “The museum is not as accessible on Sundays as it is any other day. We don’t have the handicap parking, or even normal parking, available that we do any other day of the week. Plus even though the market ends at 1:00 it isn’t really packed up till around 3:00.”

Add on top of this that many people (including yours truly) did not even realize that the museum was open on Sundays (FYI: they are open Wed – Sunday 11-4). “In the end, we lose at lot of money with the Sunday Farmers Market, the city used to pay rent to us, but they haven’t done that in a long time.” So the Tuesday Food Truck night is a win-win fundraiser that falls under the visible radar for many Santa Monica residents. “With the food trucks people can enjoy gourmet food, and most of them don’t even know that there supporting us. Plus the Food Trucks Twitter to their fans advertising to their Heritage Museum location to their followers, people who are not the our typical audience.”

As most foodies know Santa Monica has dragged its feet for quite awhile on the Food Truck phenomenon. Even when the Santa Monica City Council finally gave approval for mobile food trucks to create “food courts” in private parking lots it still took quite awhile. “We were talking about this six months ago. Everyone was very helpful and nice, but it took awhile because… well it just takes awhile.” Since it’s everyone’s first time numerous things had to be added as the planning went on. “Initially we didn’t have bike valet,” notes Smith. “We hadn’t budgeted for it, but the city required it. So the Victorian has generously donated the money so we could offer free bike valet to the residents of Santa Monica. And for those who can’t walk or bike we have parking at the museum along with ample of street parking, a lot more than Abbot Kinney.”

Along with the working diligently with the city, the California Heritage Museum also united with Southern California Mobile Food Vendors Association and it’s CEO Matt Geller. With about ninety members, the association makes sure that the trucks featured at the museum are up to snuff, meeting all the health code restrictions required by the association’s rules. Every week there are ten trucks featured, but what makes it interesting is that the association does a Round Robin. “So one week we have ten trucks, and next week have ten completely different trucks.” You can go to museum’s website each week to read about the Food Trucks available for that week. “I’m allergic to garlic,” notes Smith, “so since the museum has links to all of the Food Truck’s menus so I can check out their menus and see what options work with my diet.”

So far everyone has been super supportive of these Tuesday nights. “Our first week, one of the neighbors came by and ended up giving us a check for $1,000. It was amazing. He’s a neighbor who wanted to support the museum and what we're doing.” Smith hopes that with the Tuesday Food Truck night their Santa Monica neighbors will be reintroduced the museum and get to know their exhibitions. They have recently wrapped their skateboard show, which was the most popular exhibit the museums ever had. “We’re in between exhibits at the moment, but our next show will be starting on November 6th. We try and do exhibits that everyone in the family likes. Next summer we’re going to do a surfboard show featuring Short Boards from 1967-1982. This is Dogtown, this is where all the surfing and skating happened. It’s Ocean Park, we’re in the middle of it.”

But for all this to happen the California Heritage Museum needs to pay its bills. And hopefully the families, hipsters on dates, and people who just don’t want to cook on a Tuesday night will help them do so, while also helping their neighbors. “We’re trying really hard to make it successful so that people enjoy themselves and help out the Main Street. We want it to be a destination spot. Come to Santa Monica, eat, and walk the streets. Participate.“
Posted by Kat Thomas at 2:49 PM