Hey Guys. I covered the Santa Monica Farmers Market Quarterly Library Panel Series for the Santa Monica Observer. The all star lineup debated the subject was organics. (And (again) the most beautiful picture of an apple that Kat Thomas has ever drawn!) 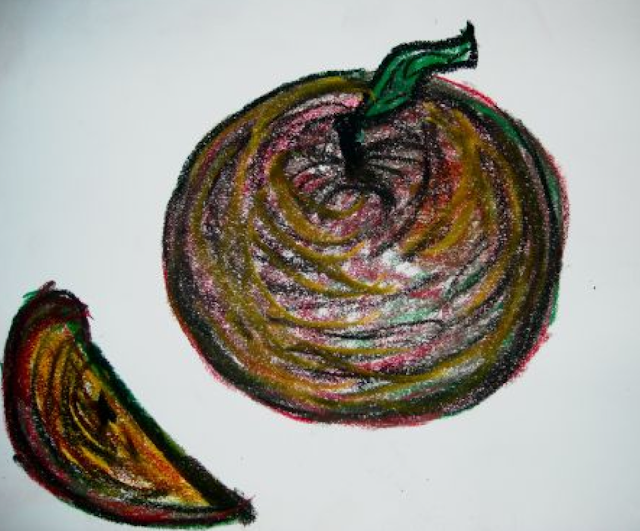 So What’s the Deal With Organics…?

Organics. Even for the informed food consumer it can bring up quite a question mark. So it’s was with this quandary the Santa Monica Farmers Market Quarterly Library Panel Series tackled the question of organics a few weeks ago. Moderated by Laura Avery, Farmers Market Supervisor, the panel consisted of three farmers: one certified organic (Chris Cadwell of Tutti Frutti Farms), one formerly certified organic (Alex Weiser of Weiser Family Farms), one not certified organic (Molly Gean of Harry's Berries) and a chef (Neal Fraser, Chef/Owner of Grace and BLD).

But first a little background of the history of organics. Organic farming practices began in the 1970s when like-minded farmers wanted to create accepted practices for growing healthy food. In 1973 the California Certified Organic Farmers (CCOF) was created with farmers certifying each other and making sure others had the CCOF seal. Fast forward to 1993 with organic farming becoming the fastest growing part of food industry; but it was a patchwork of organic standards because different organic practices varied from state to state. The year 2000 saw the creation of national organic standards. There were massive public hearings over the definition of what could technically be labeled organic. Initially big agriculture tried to have this definition to allow irradiated food, sewage/sludge and GMO (genetically modified organisms) to be included. But over 230,000 individuals wrote in and the final definition excluded these items. Thus in 2003 the national definition of organic was integrated. “In California you need to be registered organic,” explained Laura Avery, Wednesday Santa Monica Farmers Market supervisor. “You need to pay to play; you can’t say you’re organic unless you’re certified organic. That means a third party agency to check your farm. They are the ones that give you a CCOF certification.”

Turns out if you’re not certified than you can’t touch that word with a ten-foot pole. “People ask us all the time, we want to get organic, is everyone organic?” continued Laura Avery, referring to the Santa Monica Farmers Markets. “The Wednesday market has 18 organic farmers. The Saturday market has more. But even if they’re not certified organic the majority has no pesticides or no chemicals.” “We say chemical free,” explained Molly Gean of Harry’s Berries, who is not organic but utilizes natural farming practices. “It doesn’t matter what words you use as long as it’s accurate.”

So why would a farm chose to grow organically, but not get certified organic? Plain and simple: it ain’t cheap. “I understand why you wouldn’t be certified. It’s pretty expensive,” Chris Cadwell of Tutti Frutti Farm, which is organic. “I’ve always been certified since it came in. I was always thinking of the big picture. There’s too much chemical damage to the soil.“ As Molly Gean of Harry’s Berry’s (which has positively the most amazing strawberries ever) explains it, “the reason we haven’t certified organic is we’re small family farm. We’ve sold 100% of our produce at farmers market for last 13 years. Because we sold everything we grew there’s no reason to pay if everything is being sold anyhow. This is because we could tell our customers what we grow. We’ve relied on our personal relationship. You ask, we tell you, you trust us. That is kinda the simple quick answer. We don’t market ourselves as organic, or use it as a marketing tool.”

As Alex Weiser of Weiser Family Farm, who at one time was organic but not at the moment, explained it, “We’re a medium size farm. We do farmers market, but also do wholesale to restaurants, retail, and Whole Foods. It was 9 years ago we were organic, but we still farm with organic principles: rotation, cover cropping, using organic materials. There were a lot of small reasons not to be organic. A lot of varieties we wanted to grow we couldn’t get the organic seeds. It became a management nightmare, the cost of separating things. We had to label this is organic, and this isn’t. We needed to invest in infrastructure, we needed some tractors. In the end it was just management, and cost. So even though we’re no longer organic we believe in what we grow and you can taste it. The best food is the fairest cleanest food.”

“Organic always demands for farmers to jump through hoops, explained Weiser. “We saw examples of what Molly does. Putting yourself and home farm as the brand. It’s not always black and white. Local certified organic is great but it’s going to cost you more. But it doesn’t mean you shouldn’t eat an apple if it’s not organic but it’s local.” But being organic can help you on a larger level. “I understand Molly’s position: that works if you have good local customers. But I was selling to stores,” explained Cadwell. “We ship to Whole Foods we want to keep that going. Internationally everyone is following organic practices especially in countries like Germany, Denmark, and France.” “Are they looking for American products because they can’t keep up with demand? Do you look it as an emerging market?”” questioned Avery. “Absolutely,” answered Cadwell. “But more importantly the world should be organic. You need laws and paperwork so that people will follow them. So that they obey the law.” “We’re always looking to bring back our organic label,” noted Weiser. “Especially now my nieces are graduating college. But until then we do chose to use traditional farming techniques.”

“Seems the demand is growing almost too quickly. When certain farms can’t fill the demand they start to cut corners,” noted Avery, referencing the large organic company Earthbound issues with E. Coli. “To me if the brand is more important than what they’re doing than something is wrong,“ explained Cadwell. “Earthbound is multi state; it’s huge. It was really simple, they were making salsa and they didn’t clean the water that washes the stuff that goes into it. But, on my farm every single box is marked with the day it was picked, which field it was picked from, and where it’s going. If they find Salmonella I can ask what field? It keeps quality up, but it’s horrible for me because I became a farmer because I never liked paperwork. Why would Molly want to do that stuff if she didn’t have to?”

The panel then slid over the question of organic in restaurants. “I eat almost totally organic at home,” noted Neal Fraser, “But it’s different in a restaurant. If we go to a restaurant we usually don’t want know. People don’t want people telling them what to eat. They don’t want to make a political message when they’re going to dinner. They want to have a cocktail and be transported. I would love for everything in all my restaurants to be certified organic. At the same time our menu prices are the same as Citrus was 20 years ago with product costing 3 times more. You need to weigh out what you want to use. I like to use local and American, but I do what I can afford. We pay $34 for eggs we could buy $12 from Sysco but people can taste the different. Free range egg tastes very different.” Fraser noted that the most popular question asked at his restaurant BLD is if the salmon is farm raised? “We can’t afford wild salmon at our price point. We can’t use Copper River salmon that’s $25 a pound with the skin and bones. You can’t serve that for $27 a plate.”

The cost, that is one of the biggest complaints that people have about organic farming, certified or not. “People ask why are you charging so much money? But it’s for the flavor,” explained Avery. “We have school tours. We give kids a conventional strawberry grower and then we gave them Molly’s. And their eyes lit up! You got the product picked yesterday for you today. If their strawberries are not sold, which never happens, they never sell the next day.” “We only farm 30 acres but for that 30 acres we have 30 employees,” explained Gean. “All seconds are culled out and go into the compost pile. I’ve had chefs who love our product but I can’t afford it. ‘I can’t pass it on to the customer’ they tell us. But our strawberries are just more. They’re always fresh, always ripe. With us you’re going to eat every berry in the basket. “

And then there’s a question whether something sold as organic is truly organic. Another thing that healthy eating requires is trust (something that can be totally hard to come by when talking about food these days). In September NBC Los Angeles did an in depth investigation on farmers who were lying about whether they truly did not spray their produce with pesticides. “We’re vehemently opposed to cheating,” noted Gean. “If people ask,” Laura Avery explained, “we tell them our farms have to fill out a form and have to be certified with the CCOF.” “You just have trust us,” continued Gean. “Our livelihood is based on our relationship. The trust is the keystone to the relationship. If we didn’t have the trust you couldn’t have the relationship.” Ted Galvin manager of the Saturday Pico market and an audience member noted, “I’ve had a relationship with most my farmers for at least 15 years. I know 95% of them week in and week out. If anybody’s otherwise suspicious I’ll check him or her out.” Another member of the audience noted “I worked for Whole Foods for seven years in the marketing department. They are so afraid of lawsuits so if it says organic it’s probably organic.” But trust is much easier to find if you have a relationship with your food provider. “The more informed the consumer is the better,” noted Avery.

And who’s right? All of them. And that’s the hardest part. Sure in a perfect world we would all eat organic all the time, but that’s not always the case. The real issue with organics is that it’s not a cut or dry situation (and everyone likes cut and dry situations, it makes for nice and easy choices…). But this is not Rock, Paper, Scissors where one always trumps the other. Local vs. organic, industrial organic vs. small farm… the permutations are mind-boggling. So on this debate you need to take a step back, considered the options, and make an informed decision on what works best for you. And in case you missed it, the watchword for the last sentence was “informed decision” because, as was noted at the end of Food Inc.,“you can vote to change this system. Three times a day.” Just as long as you chose to think.

Kat Thomas is a writer who loves it when people make informed decisions about what and how they eat. Her Food Blog is edibleskinny.com
Posted by Kat Thomas at 2:39 PM