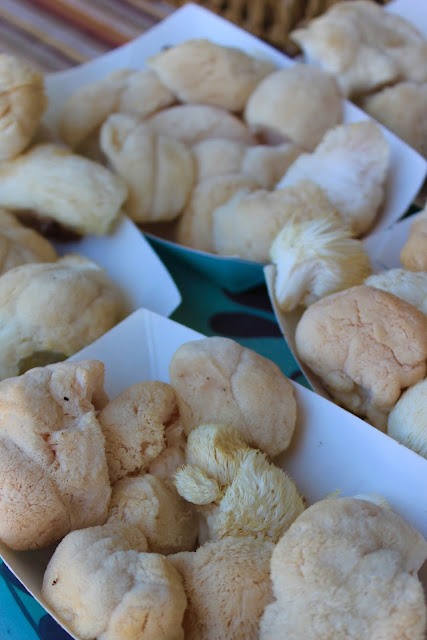 Edible Skinny has been taking photos of their mushrooms for months but on Sunday at the Mar Vista Farmers Market we were lucky enough to meet Mister Cliff Kane of Kane’s Family Farms and were promptly introduced to the world of Lion’s Manes Mushrooms! 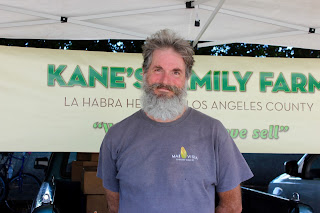 The Lion’s Mane Mushroom has been used for many years in Chinese medicine.  In addition to helping the immune system, a trait found in many types of medicinal mushrooms, Lion's Mane is special in that it has nerve regenerative and cognitive enhancing properties.  There are multiple pill versions of this tasty fungi due to it being known to help increase brain function and alleviate depression.

Because of its non-standard looking spinal shape the Lion’s Mane Mushroom is also known as by the monikers of Bearded Tooth, Sheep's Head, Bear's Head, Yamabushitake (in Japan) and Pom Pom (my favorite!).  The official Latin name for Lion's Mane is Hericium Erinaceus aka Hedgehog. 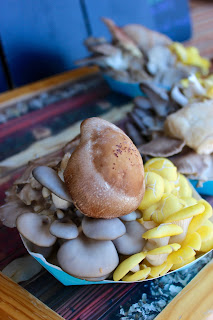 As a gourmet mushroom, the Lion's Mane has a taste and texture similar to tender lobster or shrimp.  It’s best sautéed (it’s bitter when raw) with some olive oil till tender and then it’s fantastic!

Cliff will have this mushroom regularly at Kane Family Farm’s rotation of farmers markets along with a few more exciting mushroom varieties coming up!  And in January they will be premiering a new crop of avocadoes with varietals including Hass, Bacon, and Fuerte (my absolute favorite)!

You can find Kane's Family Farm at Echo Park on Fridays, Silver Lake on Saturdays, and Mar Vista, Atwater Village, and Beverly Hills on Sundays.

Here’s to life being delicious and hedgehog shaped mushrooms making our days brighter! ;-)