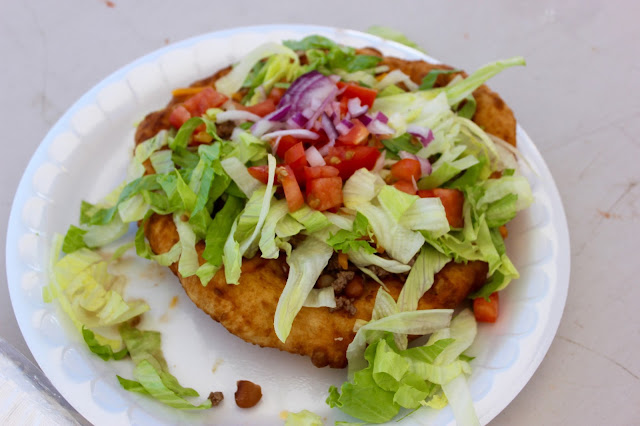 A few weeks ago Edible Skinny was covered in Playa dust leaving the infamous and fabulous Burning Man (see our article on our camp’s meal program with Bhavani Jaroff of iEat Green) when we got to experience the classic post Burner meal of Indian Tacos. 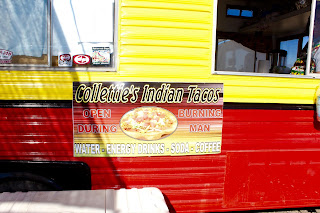 Indian Tacos are pretty much like regular tacos but made with Indian Fry Bread in place of the tortilla.   Fry Bread, aka Navajo Fry Bread, was invented in the 1860s when the Navajo Tribe were relocated by the U.S. Government (not our finest hour in history…).   Rations during this diaspora were limited to lard, powdered milk, and wheat flour, resulting in Fry Bread.

Over a century and a half later this dish is now beloved by Americans in the West.  It can be served sprinkled with cinnamon sugar, drizzled with honey, or topped with taco ingredients including meat, beans, shredded cheese, lettuce, tomato, pickled jalapenos, and sour cream.

The latter being immensely popular at state fairs, powwows, and on the hour and half trek back from civilization from Black Rock City (it’s also the official bread of South Dakota as of 2005!). 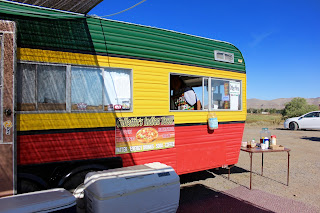 Although their origin has a checkered past, Indian Tacos are definitely a taste to be experienced if canvasing the Southwest!  It’s a messy dish to be eaten with a fork and knife (these are in no way your Baja tacos) but it’s worth the work.    The grease truck taste is a perfection of doughiness for anyone looking for the perfect carbohydrate binge.

Here’s to life being delicious and celebrating our edible evolution.