The next winery we hit on our Vines and Vinos Tour would also be our accommodations for the night (but that’s for another post coming up!) Alexander Valley Vineyards!


Located at the northern end of Sonoma County, the Alexander Valley is 22 miles long and varies in width from two to seven miles.  A prominent appellation known worldwide as the source of elegant, age worthy wines, the valley is best known for the world-famous Cabernet Sauvignon grapes that thrive from the valley floor all the way up the rolling hillsides and mountain ridges.   The alluvial soils (which means it is made up of materials that are left by the water of rivers, floods, etc…) of the region tend to impart a rich chocolates note on these rich and voluptuous Cabernets.  The gravelly soil the straddles the Russian River also encourage Chardonnay, Sauvignon Blanc and Merlot to flourish.   Besides these staples the Alexander Valley is also home to Zinfandel and Rhone varieties, including Syrah and Viognier. 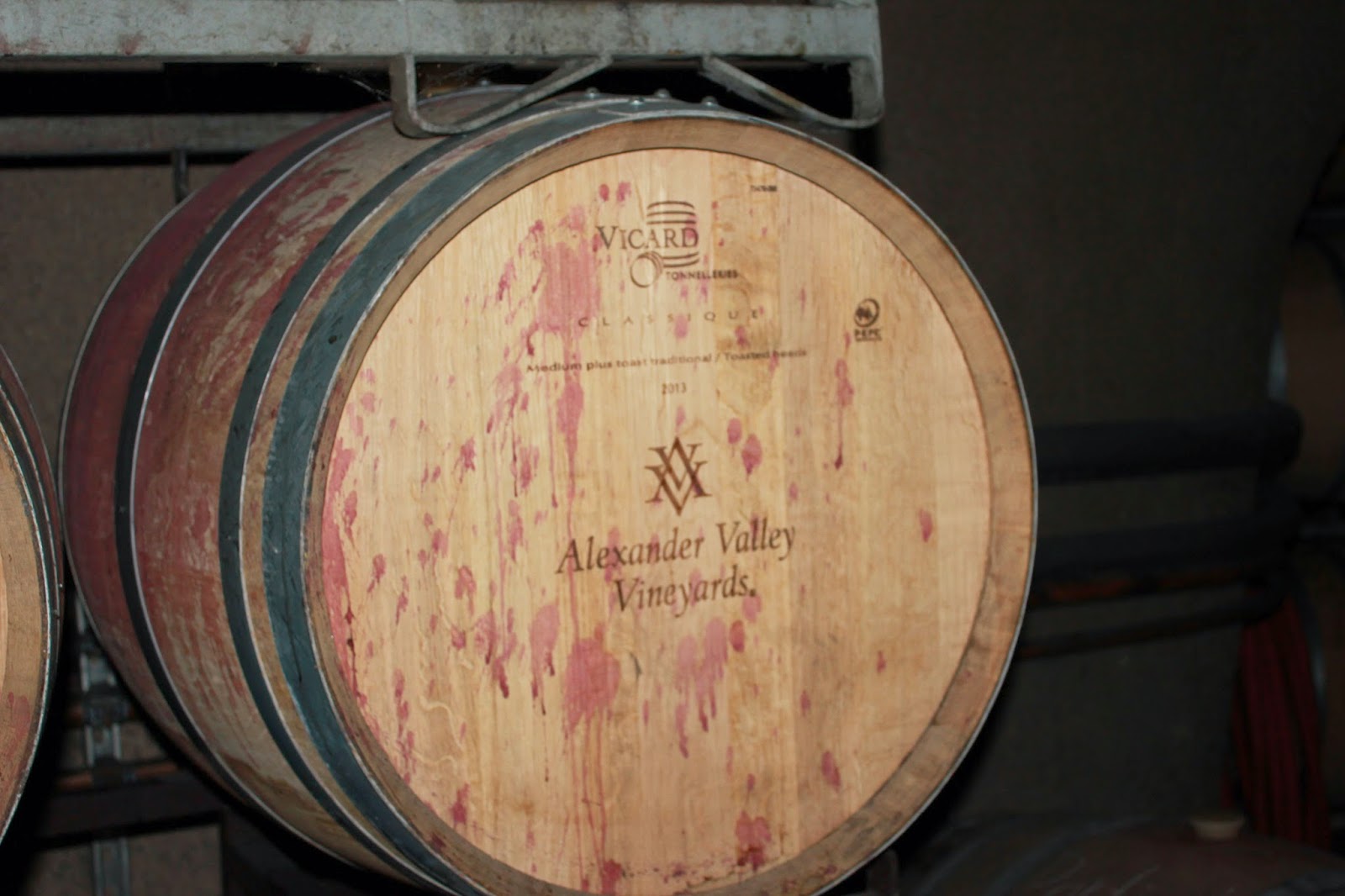 Sonoma County’s Alexander Valley was mostly prune orchards and pastures when, in 1962, Maggie and Harry Wetzel purchased a large portion of a homestead built by Cyrus Alexander in the 1840s, the valley’s nineteenth century namesake.  Here, in a rural community of family farms and ranches, the Wetzel family settled.  They raised livestock, cultivated gardens and restored Alexander’s original home making the center of the family life.

With an eye to their neighbors in nearby Napa Valley, the Wetzel’s planted premium grape varieties, among the first in the area.  Then the family built a small winery and Hank Wetzel, oldest son of Maggie and Harry, produced Alexander Valley Vineyard’s first wine in 1975.   His wife Linda set up the books and managed the winery office.

Located on Highway 128, 6 miles from the sleep town of Healdsburg, the Wetzel Family Estate grows fourteen grapes varieties on diverse sites stretching from the banks of the Russian River up onto the hillsides   Each grape variety is matched to a specific soil type and exposure.

Vineyard Manager Mark Houser and Winemaker Kevin Hart work as a team to maximize fruit flavor in the vineyard and to create balanced wines that capture the grapes varietal characteristics.  Barrel fermentation and aging take place in their AVV Wine Cave, which reaches deep into a hillside adjacent to the winery for a total of 25,000 square feet, where the cool constant temperature and high humidity are ideal for aging wine.
Kelly and I toured the Wine Cave all the while AVV winery dog, Dexter the Pug, scampered from our legs to the wine barrels.  As Francis Krugar, Director of Hospitality of Alexander Valley Vineyards explained, “We don’t need air conditioning with the Wine Cave, the temperature is always around 60 degrees usually only shift a degree or two here or there.”

Which is pretty impressive as the winery might have a 40-50 degree variance in temperature in a single day in the summertime.  It’s common in August for the thermometer to be at 60 degrees in the morning and by the afternoon have it hit the 100-110 degree (the Alexander Valley is the hottest appellation in Sonoma)!

Though parties and lunches are few and far between, every year AVV has an annual 3-course meal in the Wine Cave to celebrate the new release of CYRUS, their flagship Bordeaux style blend named after Alexander Valley founder Cyrus on his birthday (March 15th), and features the cuisine of a favorite Sonoma County chef (this year it Peloton Catering).

2014 marks the family’s 52nd year on the historic property and the winery’s 39th anniversary.  The 3rd generation of the Wetzel Family (most of whom live on the property) now produces 100,000 cases annually and was voted Sonoma’s Best Winery in 2011 by Bay Area wine lovers.

We’ll go into highlights of these wines in our next post, but we first wanted you to get a taste for the world of Alexander ValleyVineyards!
Posted by Kat Thomas at 8:43 PM