Navigating 36 Hours in Phoenix: Downtown PHX to Scottsdale to Tempe 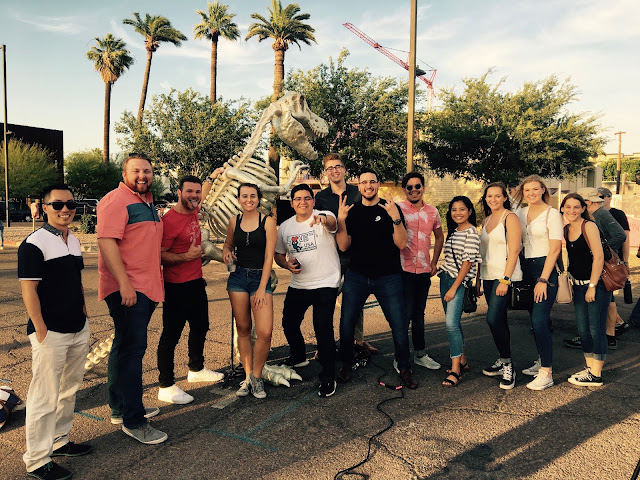 Navigating 36 Hours in Phoenix: Downtown PHX to Scottsdale to Tempe

“You know you're from Phoenix when you feed your chickens ice cubes to keep them from laying hard-boiled eggs.” 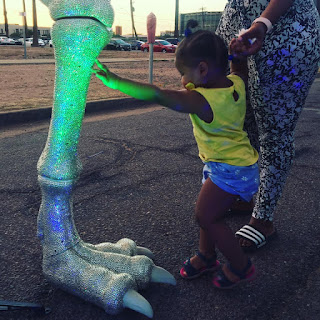 In June of last year, Edible Skinny was lucky enough to visit Phoenix again (I know, I know, with 3 visits in 2 months, the Valley of the Sun was becoming our new favorite hotspot...).  Having already spent time checking out the overall city with the Visit Phoenix tourism bureau, our 36 hour getaway found us celebrating some specific neighborhoods within the city: Downtown PHX to Scottsdale to Tempe.

So here’s to life being delicious, all your moments being postcard worthy, and taking the road less traveled in the PHX. 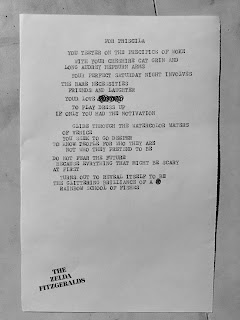 Our first stop on this journey was Roosevelt Row for their June First Friday.  Roosevelt Row serves as a hub for art, culture, creative expression and innovation in downtown Phoenix.  During each monthly First Friday event, the Row curates creative collaborators including Full Moon festival, featuring a 100+ person silent disco and art installations, and Zen Nights, the state’s largest plant-based food and lifestyle festival.  With an audience of 20,000-30,000 monthly attendees, Roosevelt Row was named a Great Place in America by the American Planning Association and was highlighted by USA Today as one of “The Top 10 City Arts Districts in the US.”  And it just so happens that the June First Friday at Roosevelt Row had two of This Way Adventures creative activations: Mowgli the Dinosaur and The Zelda Fitzgeralds.

Mowgli the Dinosaur is a bedazzled T. Rex with 150,000 hand applied rhinestones of pure bling!  He’s the perfect activation for the fun loving art crowd having become a mainstay at First Friday Las Vegas, the Dope Cup in the High Desert of California, the Cannabis Cup in Sacramento, CA, the Cannabis Cup in Riverside, CA, and private parties and photoshoots in Tucson, Austin, Las Vegas, Hollywood, and Portland.  Using Royal Epoch Portable Manual Typewriters, The Zelda Fitzgeralds create Custom Crafted One-Of-A-Kind Typewritten Poetry On-Site using Nationally Ranked Poets (Poet Laureates, Neil Postman Award for Metaphor, Pushcart Prize Nominees, Fellow for the Kenyon Review, etc).  After spending a few minutes getting to know a person by asking a series of questions that allow them to remember the best moments of their lives, the Zelda then crafts a one-of-a-kind personalized poem that will be used as a keepsake for years to come!  The Zeldas have been featured at events in Las Vegas, Los Angeles, Miami, Ojai, Phoenix, Portland, Riverside, Sacramento, San Francisco, Santa Cruz, and Tucson. 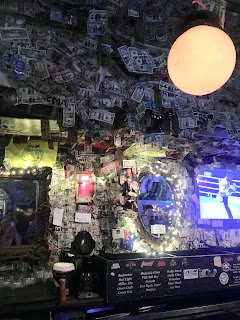 Both activations were a swimming success at First Friday on Roosevelt Row creating both magic and mischief!


PATTIE’S 1ST AVE. LOUNGE IN SCOTTSDALE
Later on that night I caught up with my Bestie Brad Twigg!  After tending bar in Santa Monica at the Basement Tavern for many years, he picked and moved to Scottsdale, AZ.  Luckily for me he was willing to play tour guide host through the sights of Scottsdale.  The first place we checked out was the classic Old Town dive bar of Pattie’s 1st Ave. Lounge.  With an “Always Sunny in Philadelphia” vibe, Pattie’s is a no-frills locals hangout with obligatory pool, ping-pong, darts, and shuffleboard tables.  The decor is textbook twinkly tacky, Christmas lights help illuminate the dollar bills that plaster almost every inch of wall space.  Oh, and drinks are only $3!  Perfect for the blue collar cliente, or anyone else who wants to save a buck or two while have a FUN night! 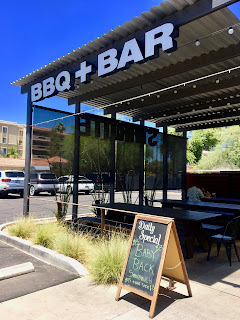 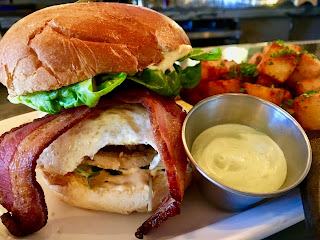 In the morning it was off to Starlite BBQ Scottsdale and Whiskey Bar with Bestie Brad.  Starlite is a casual restaurant with a full service bar offering specialty cocktails, craft beers, and wine.  Bestie Brad helps run the place, so I HAD to come support!  This place does Brunch, Lunch, and Dinner in style.  FYI, it’s easy to grab a table during the day, but if you plan of noshing at night make sure to make a reservation!

The joint is known for BBQ (I mean come on, it’s in the name!)  In addition to a wide variety of smoked and grilled meats, Starlite offers vegetarian, vegan, and other healthy choices.  The restaurant even supports local using vendors such as: Arizona Beef, organic produce from McClendon’s Farm, fresh breads daily from Arizona Bread, along with local pecan and mesquite woods native to the Arizona desert.

While there I sampled their Pickled Fried Green Tomato Sandwich on Brioche from the Dinner.  Traditionally garnished with Lettuce and Pimento Cheese, Brad suggested I add an Egg over Medium to make it more Breakfast-y.  This was complemented by Starlite BBQ’s version home fries aka Crispy Starlite Potatoes.  Tossed with Smoked Paprika and Vinegar the tang perfectly balanced the crispness of the taters.  And you can’t come to a bar and not have at least one alcoholic drink!  I sampled their Huckleberry Mule: Ginger Beer, Vodka, and the tiny purple power of a Huckleberry!  It was the Cat’s Pajamas and more!   Yummm, Yummm, Yummm (with 3Ms!). 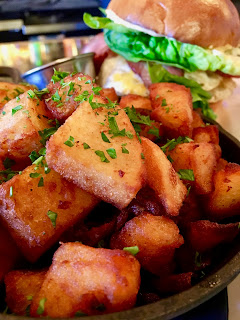 BIG SURF WATERPARK IN TEMPE
After my delightful meal at Starlite BBQ, I had officially decided it was HOT!  We were in Phoenix in June so the temp had reached 100…  It was then and there I decided it was time to go to a waterpark!!!  So it was off to Big Surf Waterpark in Tempe, AZ. 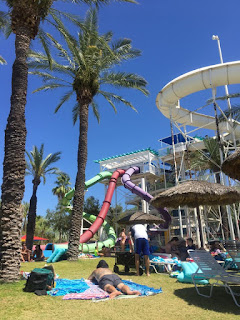 Nestled on 20 acres of fun on the northern tip of Tempe and just south of Scottsdale, Big Surf offers rides for the whole family, boasting children’s fun zones, surfing and boogie boarding sessions, and over 3,000 feet of thrilling water slides!  Big Surf Waterpark is “America’s Original Waterpark,” boasting the 3rd largest wave pool in the world, Waikiki Beach.  Also I found this on Groupon and it was a STEAL compared to water parks in other areas of the country (Score Me!)!

FOUR PEAKS BREWING COMPANY IN TEMPE
After my FUN in the sun and chlorine, I decided I needed a beer and some WiFi (BTWs breweries are the adult version of coffee shops for those low on bandwidth).  A simple game of Yelp roulette and I was off to Four Peaks Brewery! 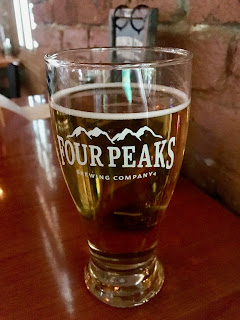 Based in Tempe, Arizona, Four Peaks Brewery helped define craft beer in the Southwest since its founding in 1996.  The brewery is named for the Four Peaks, a prominent landmark on the eastern skyline of Phoenix.  Housed in the Tonto National Forest, the massif’s summit offers four distinct peaks to the north–south ridge.  Four Peaks has gained nationwide fame in recent years as a result of earning numerous awards at the annual Great American Beer Festival in Denver, Colorado.  The brewery’s flagship ale is a Scottish-style ale infamously named: The Kilt Lifter.  In December of 2015, Four Peaks announced that it has been acquired by AB InBev, makers of Budweiser and the world's largest brewing company, and it will include the brewery as part of its High End unit.

But onto the alcohol!According to the menu description “peaches thrive in Arizona” (who knew!) and “the sweet flavor of the fruit is integrated perfectly into this light-bodied Ale.”  I found this hazy honey colored Ale (due to the fruit puree base) was a burst of malty peachness and just a bite of hoppiness!   Perfect for a hot summer day after a water park extravaganza!

My second adult beverage was Lima, Four Peaks’ Spiked Limeade drink.  It's "crafted with summer in mind, every ounce of Lima contains cool flavor made for pool parties and chill sessions alike."  Flavored with real lime juice and naturally sweetened with agave nectar (so it won't run your bathing suit body) it’s a refreshing imbibing alternative.  I drank the Lima straight, but you can also use it as a mixer at the beach or just in your backyard. 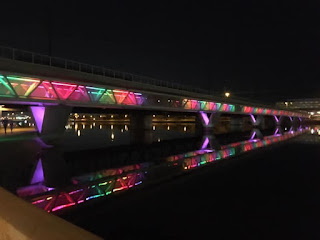 PHOENIX LIGHT RAIL BRIDGE IN TEMPE
The last order of business in my 36 hour navigation of Phoenix was the Phoenix Light Rail Bridge.  Arizona's only light rail bridge turns into a colorful show of lights whenever a train crosses the Tempe Town Lake.  This 1,546 foot-long bridge parallels the Union Pacific Railroad bridge a few yards to the west and Mill Avenue bridges to the east. It was designed by TY Lin International with art by Buster Simpson.  The LED lighting system runs the length of the Phoenix Light Rail Bridge and is programmed to create a variety of effects ranging from lights “chasing the trains across the bridge” to holiday themes and more complex shows.  This colorblast is then reflected back in the dead calm water below.  The Phoenix Light Rail Bridge is visible not only from the road, but also from the ground and even the sky, as the Light Rail Bridge sits right below Sky Harbor Airport's flight path.  It’s an architectural structure worthy of Rainbow Brite and her Color Kids!

Kat Thomas is the Editor in Chief of Edible Skinny, a site dedicated to making your life postcard worthy. She is also the CEO of the creative media company This Way Adventures. You can find more about both brands at http://www.thiswayadventures.com
Posted by Kat Thomas at 11:03 AM