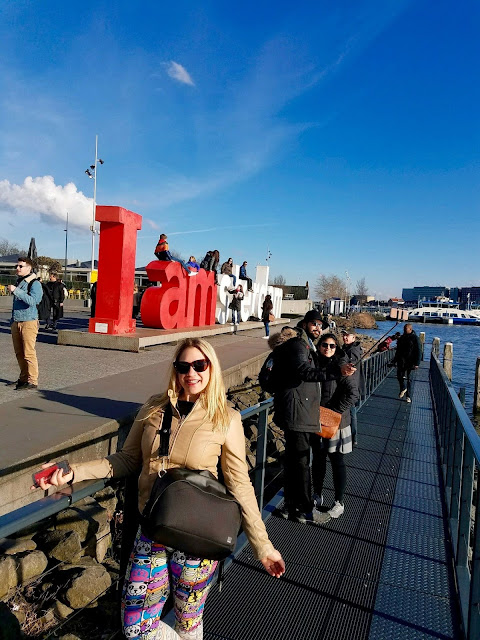 In early Spring Edible Skinny was lucky enough to spend 8 days in The Netherlands. And while on our trek of this Dutch wonderland, we discovered this country far and wide.  We saw it all in Koninkrijk der Nederlanden (aka the Kingdom of the Low Countries) from Amsterdam’s fairy tale canals walks where we were trailed by local cats to the clandestine cannabis coffeeshops to Pancakes, Pancakes, and more Pancakes! (the Dutch LOVE their Pancakes!) to the solitude of the North Sea and its citadel windmills that soldier on against 25 mph winds to the salaciousness of the Red Light District


So here’s to life being delicious, all your moments being postcard worthy, and life always giving you Pancakes, Pancakes, and more Pancakes! 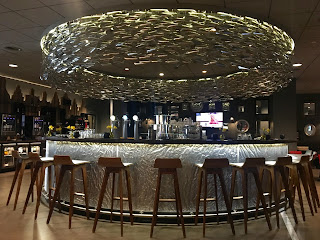 We LOVE LOVE LOVED this hotel!!! Located on the Amstel river, it was the perfect amount of distance from Amsterdam Centrum with easy access to the Metro and bikes available for rental.  From its complementary Sauna, Steam Room, Ice Bath, and Gym (gotta LOVE Europe’s embracement of the art of relaxation) to the STACH in the Lobby (a chain of corner grocery stores that sell gourmet coffees, pastries, wine, and juices), it was perfect spot for  just arriving Americans. The rooms had plenty of USB plugs (great for Americans who only brought a few converters…) and free WiFI that was strong enough to stream Netflix (for those jetlagged 9 hour difference nights)! The Hotel Lobby bar, festooned with hundreds of metal fish schooling around it, invited us to connected with multiple Americans while sharing some local beers.
https://www.accorhotels.com/ 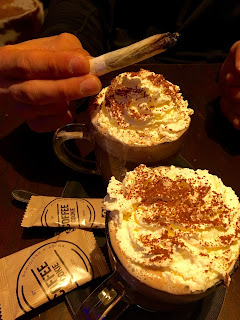 The Bulldog
After a quick post flight nap we hopped onto the Metro via our I amsterdam City Cards (which gives you unlimited access to Amsterdam’s GVB public transport system (which includes all buses, trams and Metros in the city) for 24, 48, 72 or 96 hours).  We exited at Amsterdam Centrum and headed over to the Bulldog for some legal cannabis. Amsterdam’s first coffee shop, their legacy started in 1974 in a sex-shop located in the cellar of house number 90. What started as a living room for friends where they secretly smoked joints is now an Amsterdam (and Canadian) institution with 4 Cafes, 5 Coffeeshops, 3 Souvenir Shops, and 3 Hotels worldwide.  Our first night in Amsterdam we got a gram of Sativa and 2 Hot Chocolates with Whip Cream (it costs extra… there’s a reason why cheap dates are known as “Going Dutch”) and our complimentary cookie (making up for the Whip Cream) and relaxed into the chillest vibe in town. Open from 7am to 1pm it’s an experience not to be missed!
https://www.thebulldog.com/

Burgerland
Sufficiently stoned we headed over to Burgerland, an all night joint located around the corner.  There we consumed two of Amsterdam’s most prevalent offerings: Burgers and French Fries. While we nooshed on these Dutch staples we learned about Irish Beef (a grass fed beef that’s known to be leaner in cut and always comes in pieces versus a burger patty!).  This bovine delight was topped with one of the city’s favorite souvenirs: Old Amsterdam Cheese. Our French Fry sauce (which naturally we had to pay for...) included the requisite mayonnaise! We had begun our Dutch cullinary adventure! 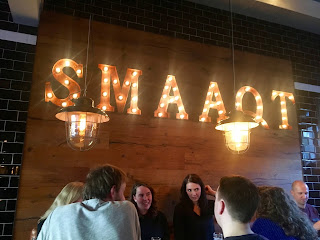 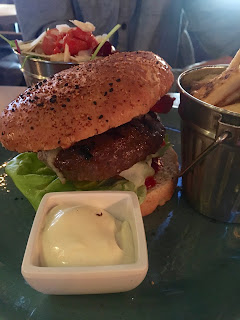 The next day we hoped a quick (FREE) ferry ride across the River IJ and Amsterdam's harbour, to Amsterdam Noord (North). Created during the Golden Age of Dutch trade, it later became a substantial industrial district. Today's Noord has grown into the much-revered bastion of Amsterdam's alternative culture, the heart of Amsterdam’s indie art scene, having refurbished many old shipping warehouses to host trendy eateries, exhibition, and performance spaces, artist studios.  Noord’s rebirth was accelerated by Amsterdam’s urgent need for unexplored real estate for Amsterdam's growing population. While there we swung on the swings of the area’s multitude of parks, checked out the I amsterdam Sign (they’re strategically placed throughout town and are fantastic IG spots), and dined at the Super Duper FAB SMAAQT! The restaurant’s cozy interior, decorated with warm woods, bricks, and leathers, complimented the best burger we had in Amsterdam (which is saying a lot!) on a black pepper bun!
Amstel Boathouse
The next day we dined at the Amstel Boathouse, located right on the Amstel River.  There we experimented with one of the Dutch’s favorite appetizers: Bitterballen. Bitterballen are crispy deep-fried breaded rounds with a tender, savory filling traditionally made with beef.  Think of it as a deep fried meatball that is more mushy in the middle. Neither Matt or mine favorites, we were still glad we were able to experience a classic Dutch dish! 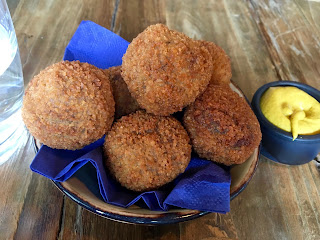 Albert Heijn
One of my favorite things to do in other countries is go supermarket shopping!  Grocery stores are windows into different cultures. While exploring them you get to see what’s favored in different cuisines (in The Netherlands it’s meat and potatoes… Shocker!) along with differences in packaging!  So we entered Albert Heijn, the largest and oldest Dutch supermarket chain founded in 1887, while there we bought wine for 6 Euros, prosciutto for 5 Euros, and Strawberries for 12 Euros! 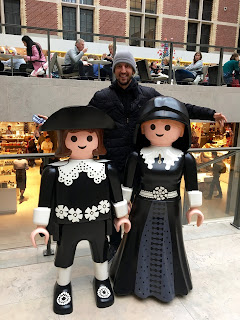 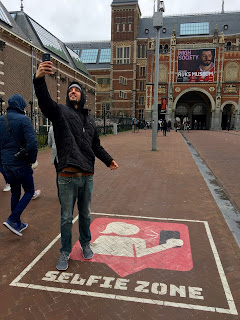 One of the museum’s we scoped out with our I amsterdam City Cards was the Rijksmuseum, a Dutch national museum dedicated to arts and history in Amsterdam.  The museum is located in Museum Square (where’s there’s another I amsterdam sign for more selfie taking…).  The Rijksmuseum is the largest art museum The Netherlands and is also frequently the most visited museum in all the land.  The museum has on display 8,000 objects of art at any given time (with more than a million in reserve).  It’s most treasured painting is Rembrandt’s Night Watch (with crowds the equivalent of seeing the Mona Lisa at the Louvre).
https://www.rijksmuseum.nl/en 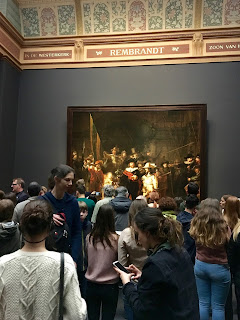 Rent A Bike Amsterdam
Amsterdam has more bicycles than people: an estimated 1 million bikes to 800,000 residents. So it seemed fitting that we would have to explore the city on two wheels!  Our rentals came from Rent A Bike Amsterdam (one of the least expensive places in town with a 24 hour rate of 10 Euros plus deposit). Every single day Amsterdammers collectively travel 1.2 million miles on bike, so as we whizzed past the picknickers and boot campers of parks such as Het Vondelpark we felt right at home!  Just watch out for other two wheelers as bike accidents can be quite nasty! Best to invest in that adorable bike bell (that for Kat it said “I LOVE MY BIKE”).
https://www.rentabike.nl/en/ 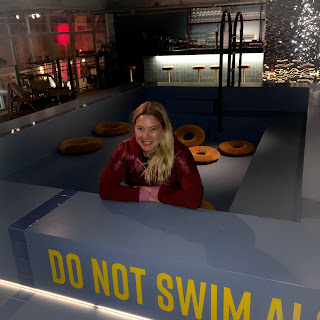 It took three years to rehabilitate the old tram depot into a food hall that offers more gourmet food than you can ever consume.  Wood-oven pizza? Check! Poke bowls? Check! Spanish Tapas? Check! There’s even a restaurant/nightclub that has a “pool,” and when we mean pool we mean an empty swimming pool with pillows for that perfect IG shot (they’re everywhere…. EVERYWHERE!!!).
http://foodhallen.nl/ 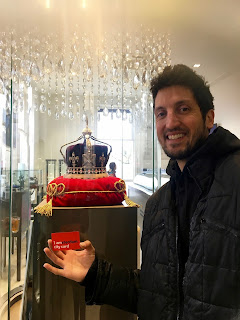 Everything is Amsterdam is better when viewed from a boat, and a quick one-hour tour is a great way to acquaint yourself with the city!  Our boat cruise was included in our I amsterdam City Card allowing us to experience the city from yet another vantage point (Centraal Station looks completely different (peaceful)  from the water than when running to make a train to the northernmost point in The Netherlands (chaotic)). Our Lovers Canal Cruise included GPS Audio Guide available on board in over 60 languages to educated ourselves on a bit more Dutch culture.  And with Hop-On/Hop-Off ability and departures happening two to four times per hour, there’s no reason not to get to know the beautiful Dutch capital on a charming canal boat! 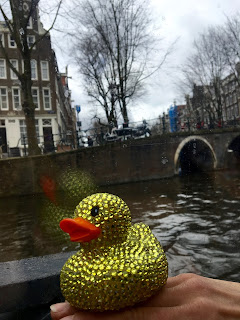 Pancakes for breakfast (or lunch or dinner).  You can't spend a day in Amsterdam without sampling the nation's favorite dish!  For in the Netherlands, pancakes are actually considered a main meal, or in the case of poffertjes (small fluffy versions), a sweet snack.  While in Amsterdam we dined at the carousel like De Vier Pilaren. This mobile restaurant used to travel the funfairs of Holland before settling on the waterfront dock “leidsebosje” and becoming a popular tourist destination….  Dutch pancakes are thinner than the US version, and they’re served either savory or sweet with Stroop (molasses) and powdered sugar. So Pancakes, Pancakes, and more Pancakes!
http://www.menuvierpilaren.nl/en 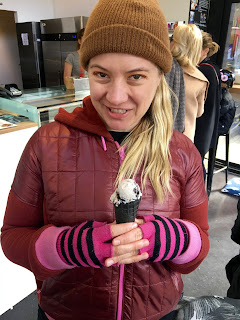 Arguable the best ice cream in Amsterdam. What started as one small shop near the Albert Cuypmarkt has quickly expanded to become one of Amsterdam’s most ubiquitous ice cream shops. IJscuypje makes their ice cream on location from fresh, delicious ingredients.  Stand-out flavors include devious Dutch Chocolate, refreshingly Key West Lime Pie, and signature Champagne Ice Cream made with Moet and Chandon (only in the summer). Along with the cold stuff, Ijscuypje makes some mean French Fries (with t-shirts claiming “Fries Over Guys”).  The potatoes come from a local farmer and they then double cook the fries for the perfect amount of crispyness. Sauces choices (for an additional cost, naturally) included Pimente (spicy mayonnaise with peppers), Truffle (truffle and mayonnaise, no explanation needed), and Oorlog (a combination of homemade satay and mayonnaise).
http://www.ijscuypje.nl/

The Red Light District
XXX is the logo of Amsterdam (though ironically the reason isn’t dirty in the least…) but with Kat’s burlesque background, we had to explore De Walle aka The Red Light District.  De Wallen is the largest and best known red light district in Amsterdam, consisting of a network of alleys containing approximately three hundred one-room cabins rented by prostitutes who offer their sexual services from behind a window or glass door, typically illuminated with red lights.  Window prostitution is the most visible and typical kind of red light district sex work in Amsterdam with the "kamers" are a large tourist attraction.  A great book documenting the life and experiences of an Amsterdam prostitute is David Wienir’s Amsterdam Exposed (reviewed a few weeks ago by Kat).
http://www.amsterdamexposed.com/

Matt Bourquardez is a Writer for Edible Skinny. He has traveled the globe and rarely sees his house.