After taking a break from posting on our Vines to Vino trip Edible Skinny now resumes to finish the tales Carmel-by-the-Sea!

¡Que Rica! (How Delicious) w/ Mundaka
So our first night at Carmel-by-the-Sea we had the pleasure of dinning at the scrumptious Mundaka! 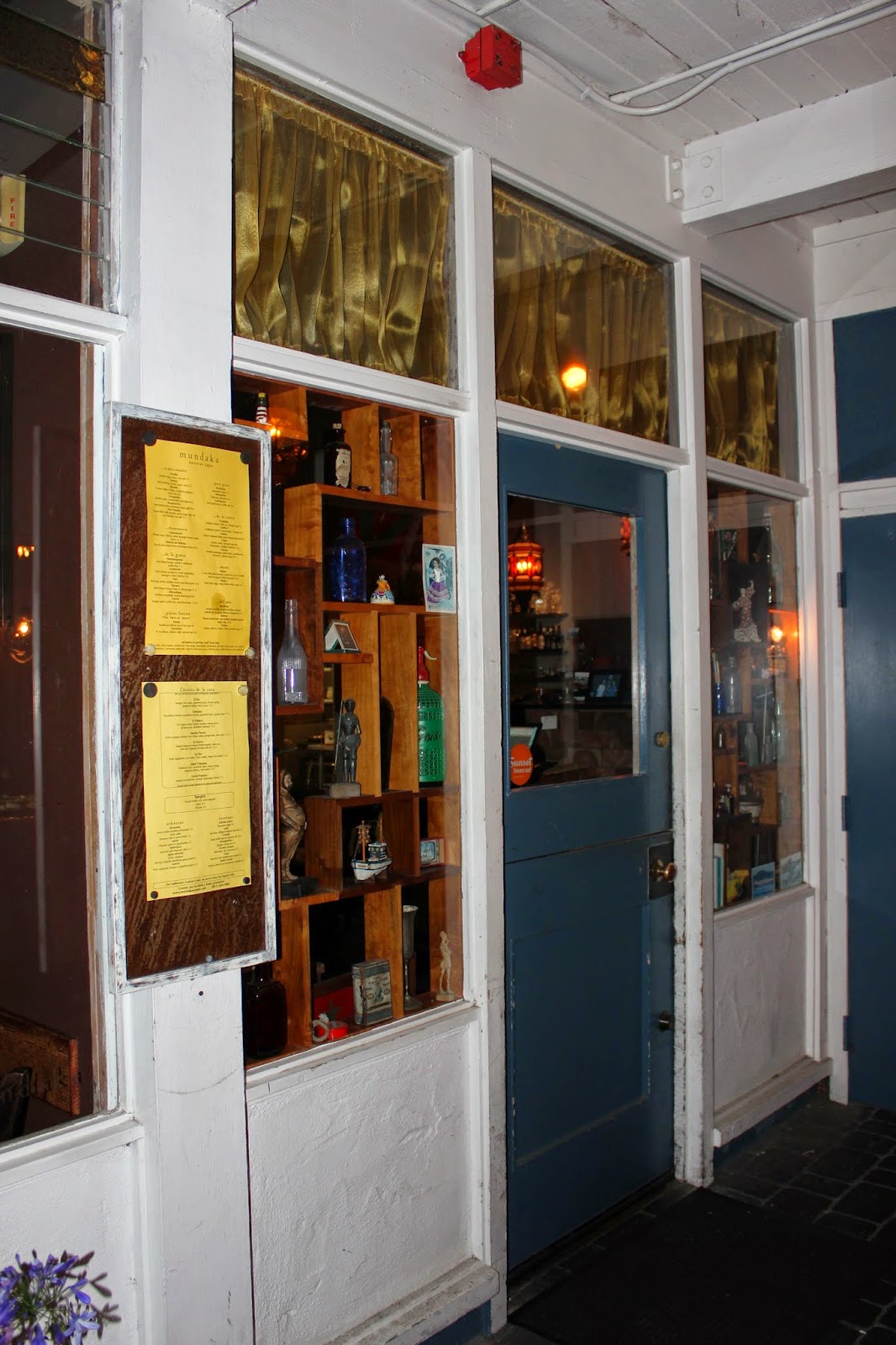 Opened in March 2009, Mundaka was a Spanish style tapas restaurant located blocks away from Hofsas House.  It’s Spain by way of Belgium chef and owner Brandon Miller (who did a culinary food tour in Espana).  Mundaka is the type of place where locals usually make their way there once a week and couples celebrate their anniversary.  It’s good food and drink (but not to excess) at a reasonable price.
As soon as you enter there are echoes of Espana in every corner.   The interior is dim with a darkness that is full of excitable uncertainty.  The Basque country flag proudly hangs from the ceiling.  The soundtrack of Vicki, Christina, Barcelona plays in the background.  Kelly (who lived in Barcelona for a year) noted how Mundaka emitted the calmness of an European restaurant, of a Mediterranean meditation.   Mundaka means surfer in Spain and it follows that the restaurant would have a laid back casual attitude about the entire dining experience.

Which is not to say they don’t focus on craft.  Mundaka believes in serving “real” food only.  The bottom of each menu proclaims:

It’s in the details.  House made Sangria with red wine.  Lawrence of Arabia projected on the wall.  Perfecting a few bites of everything.  Each dish is delicate and distinct without being overwhelming.  It’s the mastery of a few ingredients.

Being the Veggie of the group I tried the multiple plant-based options on the menu.  It can be hard for vegetables to be delectably bold, but Mundaka positively rocked it!

The Papa Bravas ($5.5), a classic Spanish dish of fried potatoes, tomato sauce, and aioli, was delightfully spicy with hints of chipotle smokiness.  The Fried Garbanzos with Truffle Salt ($5.5) were delicately toasty like popcorn, but so much more advanced.  Absolutely not to be missed!!!

The Coliflor, a dish of Cauliflower gratin, horseradish, Gruyere ($8.5) was rich and homey, like the food equivalent of a warm couch.  The horseradish aftertaste definitely made sure you weren’t going to forget it.

The Flores, beer battered fried squash blossoms with lavender cara sauce was created to perfection.  Wow!  This is what fried food is supposed to be: a fragile batter that doesn’t weight down its interior but instead augments it! ($7.5)

I (naturally) didn’t partake in the meat courses, but Kelly claimed that the Duck Confit with Chorizo and Leek Puree was the best dish of the entire trip.  “It had a spiciness not found in traditional duck.  Smooth but decadent; it had the best combination of tender and crunch.  It tastes like someone made it just for you.”

For a sweet finish we chose the Pastel de Gengirre, Ginger Cake with Chantilly Cream ($8) and Pan Chicoliate (Chocolate, Sea Salt, Olive Oil, and Toast ($7.5).  The latter was perfection.  Crusty bread toasted with the perfect amount of oil and salt with a chocolate spread that was rich and sweet but never bordered on sickly.  Our server Danielle told us that during the holiday season Mundaka offers a “build your own gingerbread house.”