Wine Guerilla's Zinfandels: Anything Else Is Just Sour Grapes 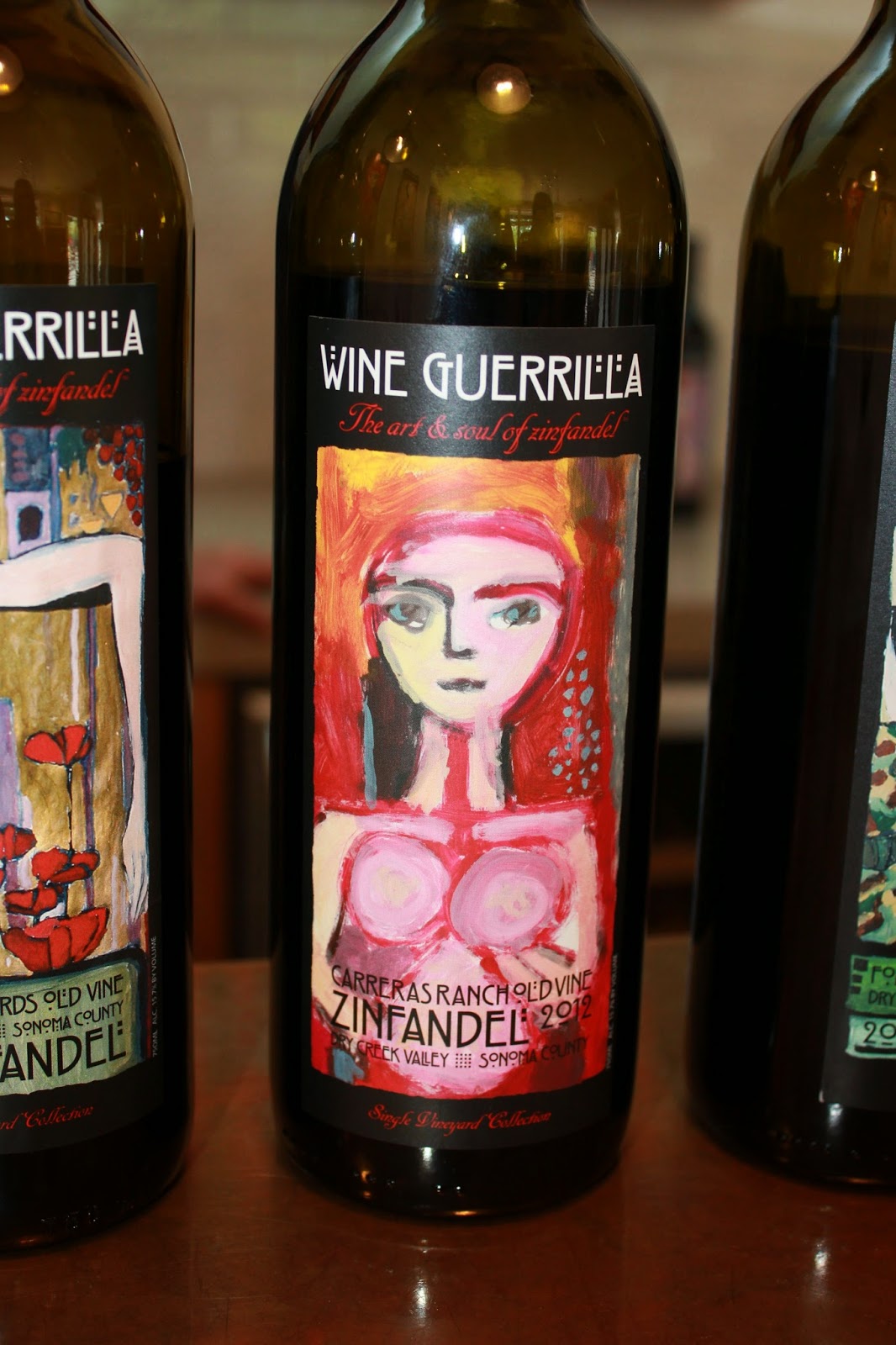 The recently opened tasting room of Zinfandel based Wine Guerilla has the air of a contemporary art gallery (which is fitting since that was the space’s previous job).   With flashes of color and clean lines this is vino with an edge.  Located in the teeny tiny town of Forrestville (population: 3,293) in the heart of the Russian River Valley, the Wine Guerilla is a hybrid of art and taste.  Raising his glass in defiance of corporate viticulture and bourgeois winemaking, the Wine Guerilla (nom du guerre of Mister Bruce Patch) is the defender of the rich tradition of California’s most iconic grape: the old vine Zinfandel.

This local gem is the perfect hybrid of subtle craft and wanting to be seen.  There’s multiple tasting bars inside along with a patio out back for al fresco imbibing.  Contrasting stark white walls, the space is adorned with posters of past Wine Guerilla labels, all original works of art by Topanga Canyon resident Sean Colgin.

The world to the art of Zinfandel has definitely been more than windy for Mister Bruce Patch.  After spending 30 years producing and promoting music, working with such artists as The Supremes, Gene Pitney, Bill Medley, George Jones, Smokey Robinson, Ike & Tina Turner, The Four Tops, and The Temptations, he felt it was time to leave the music business to the younger generations. 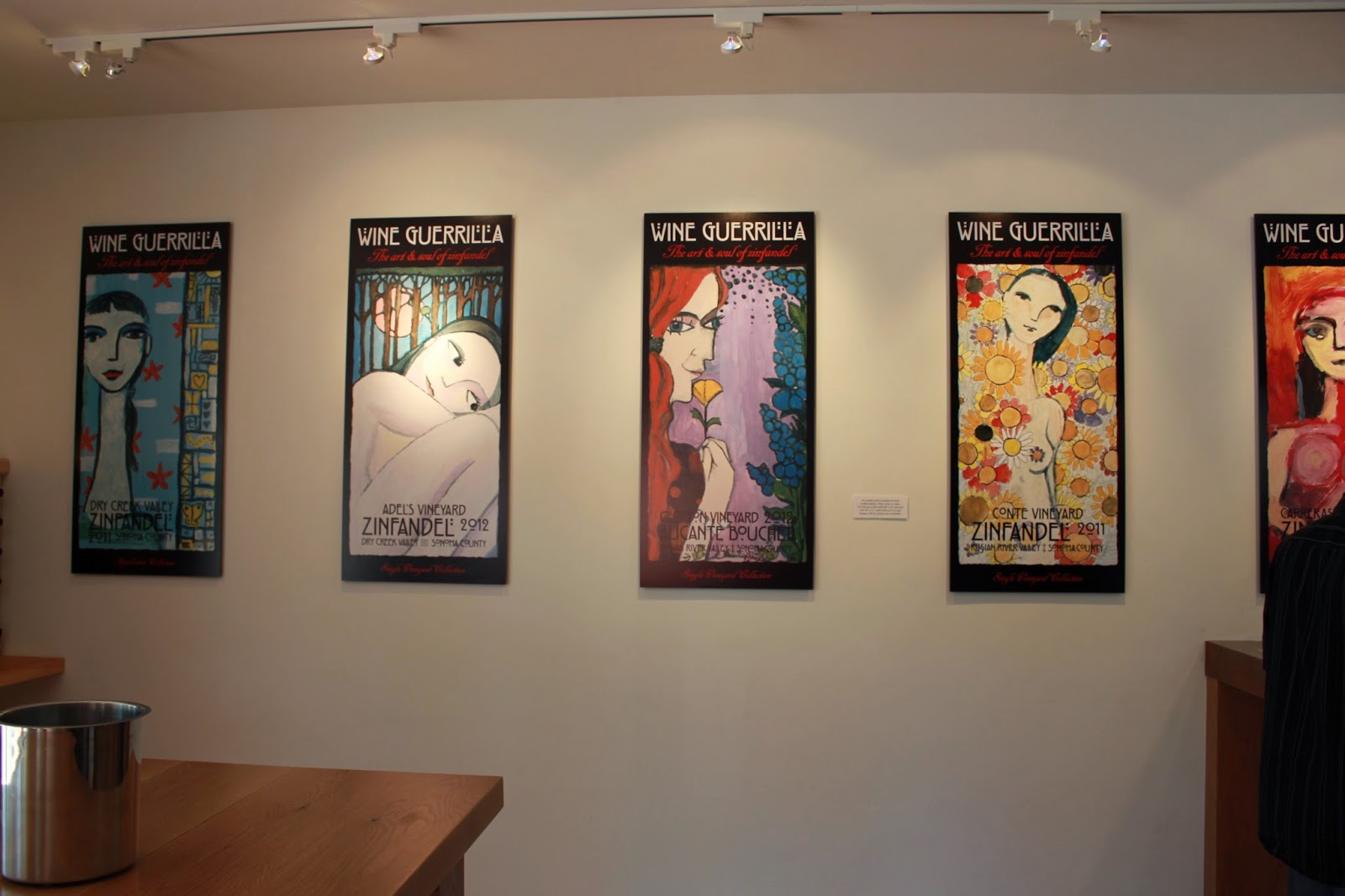 He and his longtime partner Andrea Cleall (who’s also the mother of label creator Sean Colgin) moved north and Bruce looked around for a new career.  What met his eye was mile after mile of vineyards.  As he became acclimated to this new landscape he began visiting tasting rooms and barns, chatting and picking the brains of local growers and vintners.  He started developing a refined wine palate.  It occurred to him one day that many of these small producers had no representation outside of their neighborhoods. He felt he could sell their wines all over the country so he created a brokerage.
After a brainstorming session in front of the fire on a rainy evening he and a few family members, one of whom had been reading ‘Guerrilla Marketing,” came up with the name Wine Guerrilla.  The brokerage eventually led to a position as national sales manager for Deerfield Ranch Winery and eventually with Deerfield’s blessing, to making his own wine.  It seemed only natural to name it Wine Guerrilla.

For the past decade Bruce has brought his passion for discovering just the right notes to the legendary vineyards of beautiful Sonoma County, making beautiful music for the palate.  And speaking of palates, Bruce also the author of the “perfect cookbook,” ‘Grillin’ with the Wine Guerilla’ which has recipes borrowed from family and friends as well as from the rich and famous. 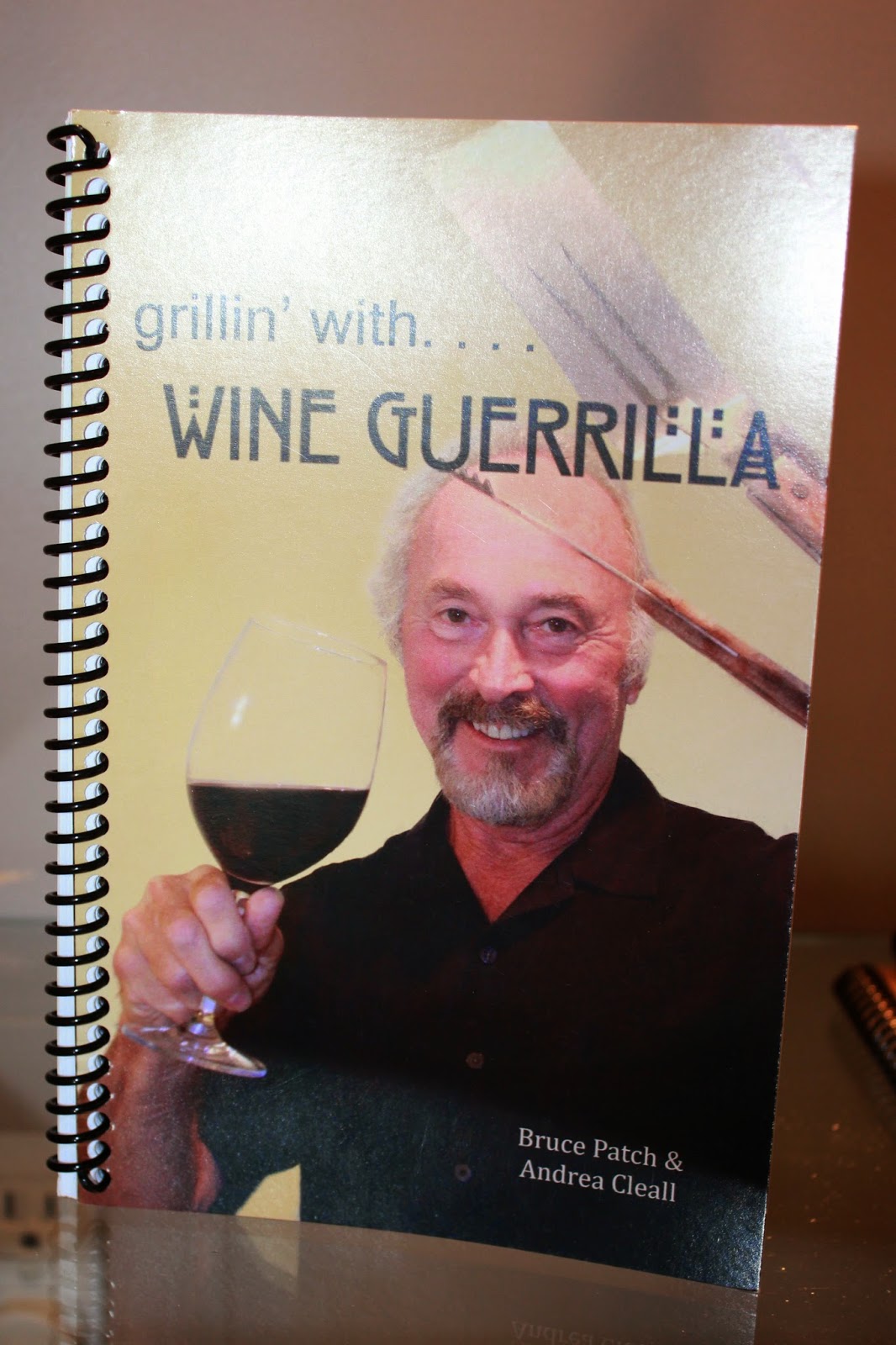 There’s a myriad of Zinfandel choices at the Wine Guerrilla from a myriad of Sonoma AVA’s.  My favorite was the 2012 Carrera's Ranch 'Old Vine' DryCreek Valley ($40).  With a nose of boysenberry and black cherry; its opulently rich without being overtly jammy.  The palate has flavors of blueberry, blackberry and boysenberry with notes of raspberry and spice in a marathon finish.  This is what single-vineyard Sonoma wines are all about!

Another standout was the WG’s 2012 CloptonVineyard 'old vine' Alicante Bouchet ($50).   Alicante Bouchet (a varietal that neither of us at ES had heard of), is a teinturier (a grape with red flesh whereas the majority of wine grapes have a lighter flesh inside of them).  Traditionally teinturier are used as a blending varietal to “redden up” wines, but the Wine Guerrilla tossed this concept aside and ended up 3 barrels of 100% Alicante Bouchet.  One barrel went to their meritage Rebel Cru, while the other 2 barrels created 48 cases of Alicante Bouchet.  All ripened and rich, it's really tasty with a great mouth feel for a newly released wine.

But if you want to taste this California rarity you’ll need to get in your car because Wine Guerilla’s Alicante Bouchet is only available in their tasting room.  So get behind the wheel and set your iPhone GPS for the teeny tiny town of Forrestville and the Wine Guerilla’s kaleidoscope tour into the world of Zinfandels.  For as Mister Bruce Patch says, “Anything else is just sour grapes.”
Posted by Kat Thomas at 7:28 PM