Russian River Vineyards, Corks Restaurant, and the Best Goat Cheese in the World!

Sorry for the delay in our next post, but Kelly and I were furiously working on an The Americans script for the Warner Bros. Television Writers’ Workshop that was submitted on Saturday!!! So now we can return you to our previously scheduled program… The Vines and Vinos Tour!!! 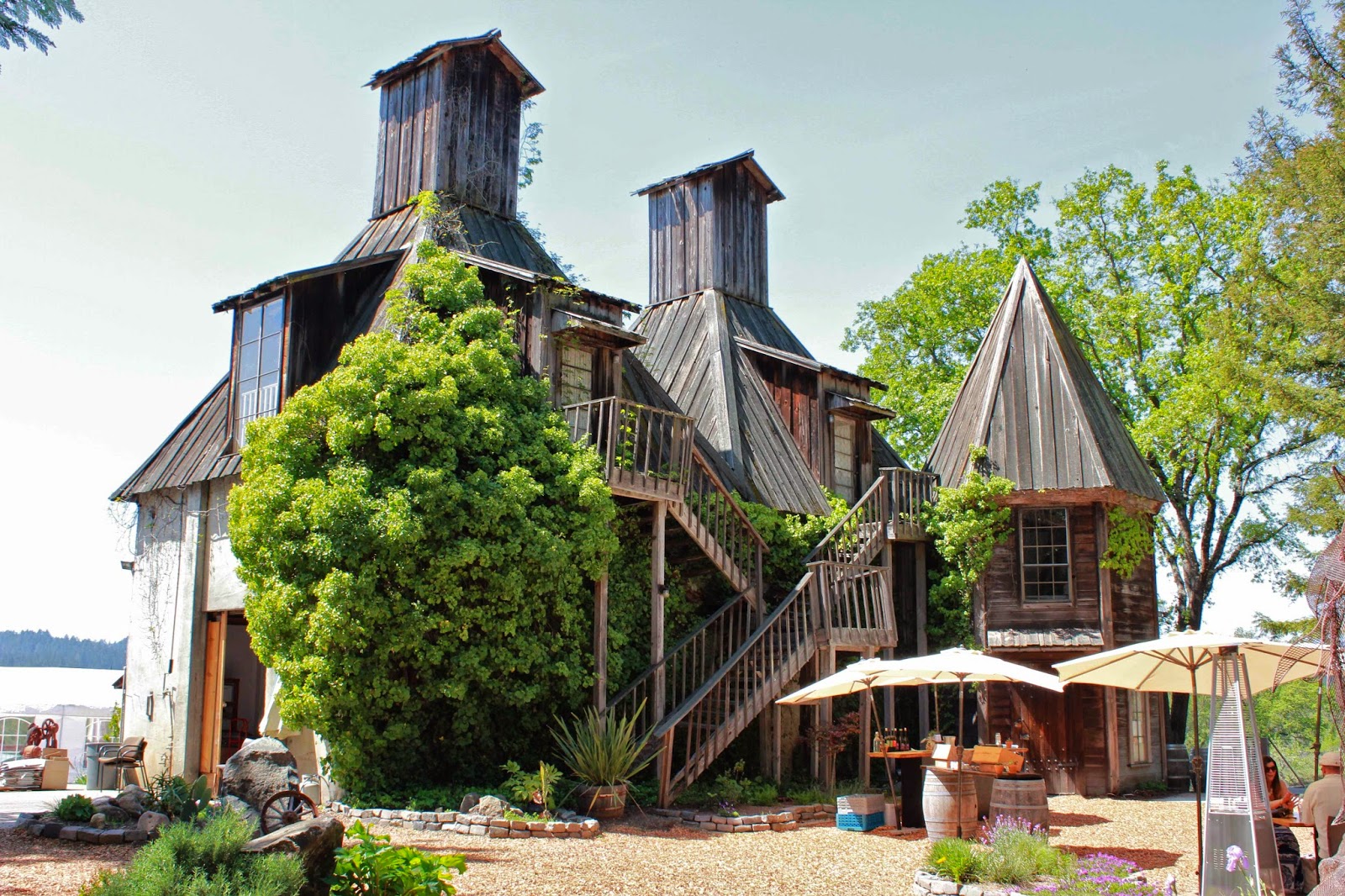 After sipping some bubbly over at Iron Horse Vineyards, we sally forthed to Corks Restaurant at Russian RiverVineyards for lunch with Mr. Raymond Rolander of Wine Cube Tours.

From its original planting in 1963, Russian River Vineyards has established itself as one of the premier organic (!!!) and sustainably farmed grape-growing properties in California.  Many generations previously, in the ancient time of the Native American Pomo, the vineyard was a tribal village.  And prior to the grapes, the land was a Sonoma hay field. 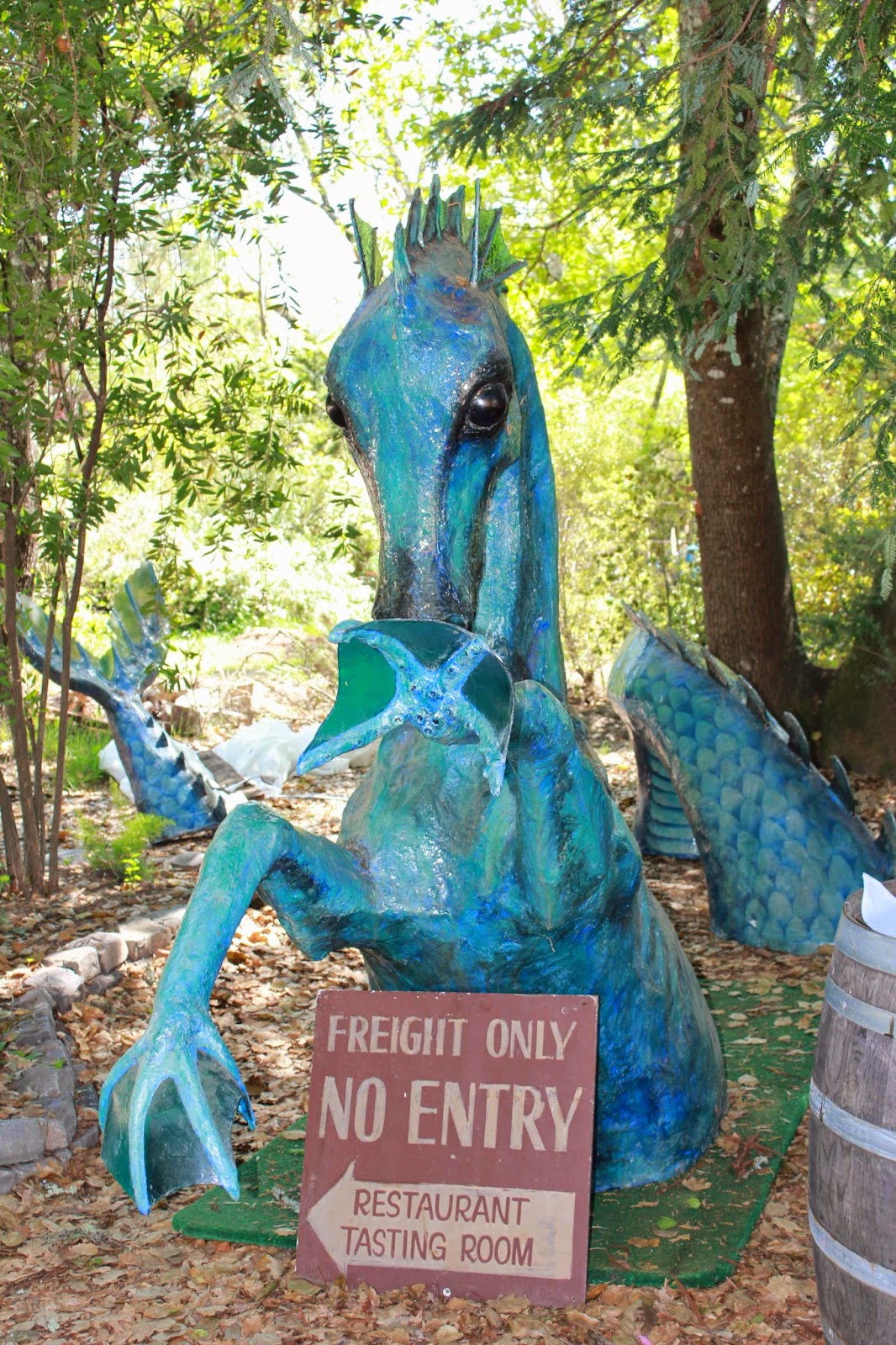 The vineyards on the property, which include some of the very first Merlot vines ever planted in Sonoma County, were originally established in 1963, a time when most of the agriculture in the area was devoted to apples and prunes, surrounded by forests of Redwood trees.  Even the name Russian River Vineyards came long before the Russian River Valley was officially declared an appellation in 1983.

Corks Restaurant at Russian River Vineyards is the only winery-based restaurant in the Russian River Valley.  Its menu features the seasonal best from local growers and emphasizes organic meats and sustainable agriculture.

Like all good winery adventures, Corks likes to paint a picture.  The patio was very romantic, with white light strings, distressed wood, brick flooring, and a rusting iron art pieces scattered throughout the gardens.  RRV has brand ambassadors, two rescue dogs on the property that roam about saying hi to diners and sippers alike.  A large 18th century Russian Hop Hose with 800 bats living in it (since they are an organic vineyard, the bats are used in place of insecticides and rodent poison along with the guano being a great fertilizer) gives the outdoor tasting area the slightest hints of gothic Brontë novel. 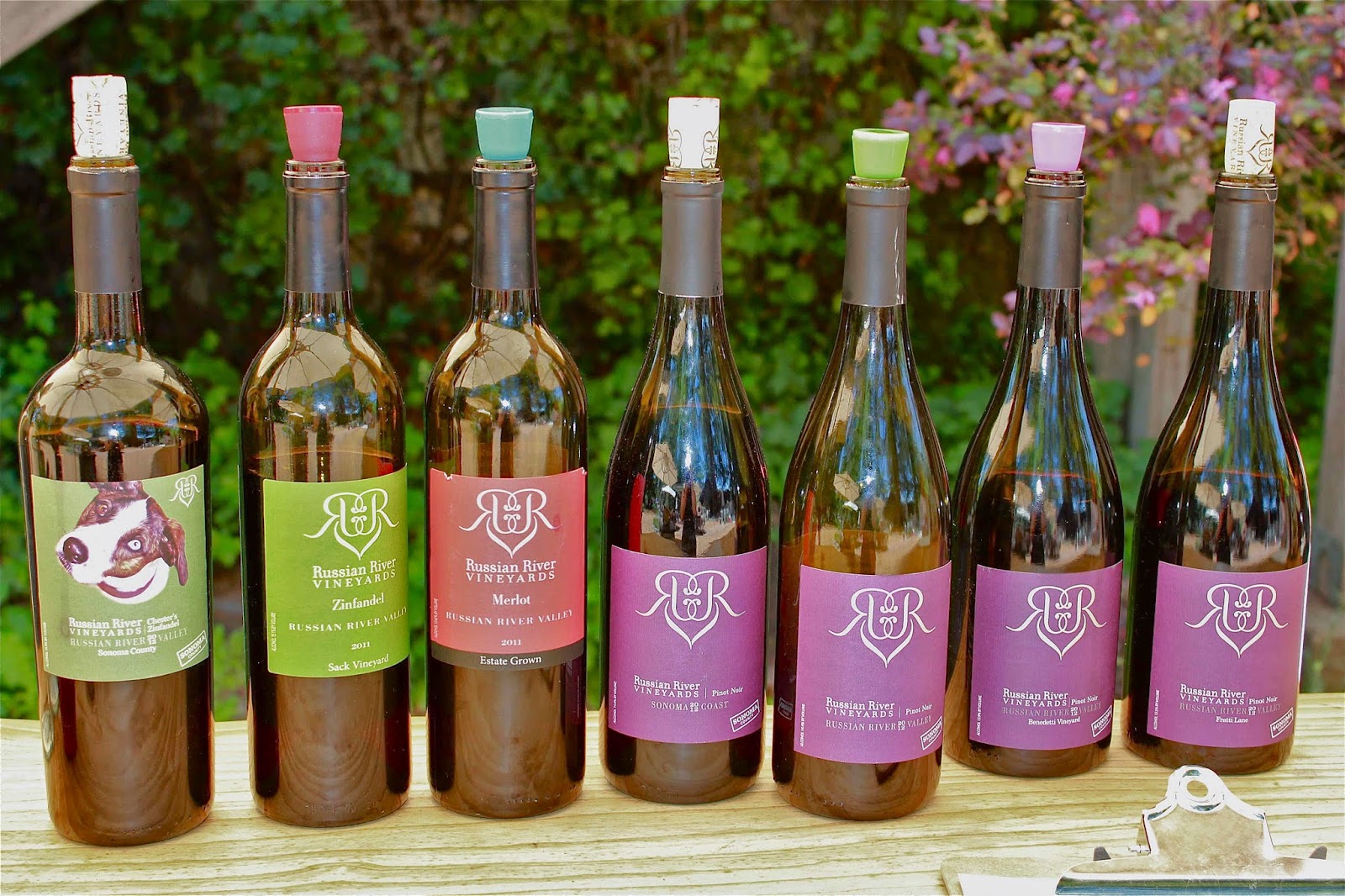 Initially we were planning on just getting lunch, but James, the Director of Sales at Russian River Vineyards was amazing enough to bring us over samples, which were perfect for the sunny al fresco lunch we had.  Wine tasting is a fun experience as long as the person who pours it is fun, knowledge, and (most importantly) doesn’t have an attitude and that James to a “T”!

James had us start with RRV’s `12 Sonoma CoastChardonnay ($35).  A (French) Oaked Sonoma Coast Chardonnay (somewhat of a rarity in the Russian River Valley), this wines delicately balances crisp tropical notes with soft vanilla.  It was a perfect compliment to our first starters at Corks. 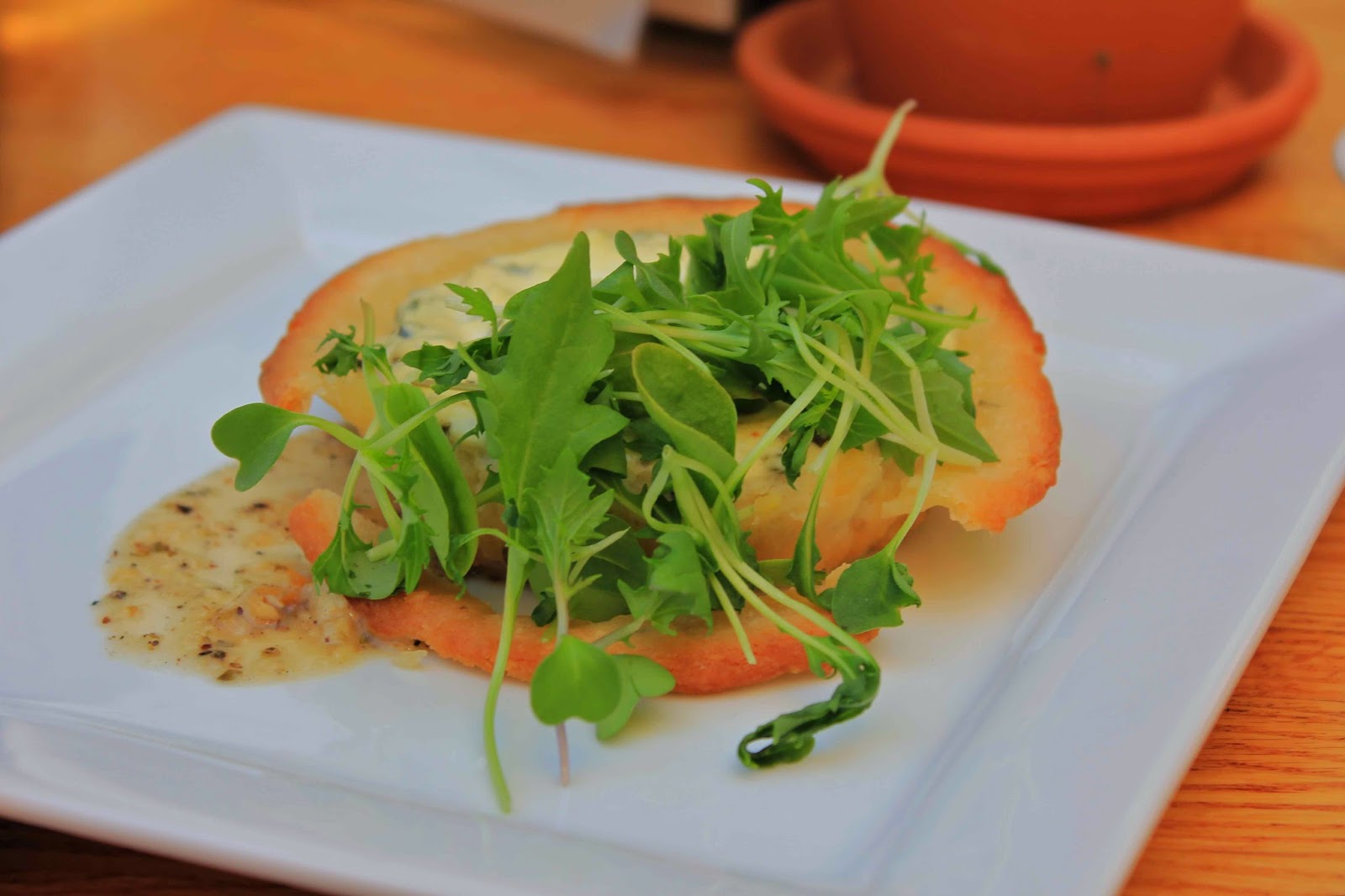 Redwood Hill Chevre and Corks Garden Chard, Baby Greens with Zatar (aka Za'atar is a Middle Eastern spice similar to thyme that is traditionally dried in the sun and mixed with salt, sesame seeds and sumac) Dressing ($14) was absolutely amazing!!!  Kelly described it as “an orchestra of taste where each instrument introduces itself subtly.”

This was mainly due to the Auh-Mazing goat cheese that was used in this and others Corks’ dishes.  The cheese darling Redwood Hill Farm is an award-winning, Grade A goat dairy farm and creamery located in Sonoma County.  Committed to making the best tasting and least processed artisan goat cheese, yogurt and kefir, their family-owned and operated company uses solar power to sustainably produce all its goat products.  Redwood Hill Farm proudly became the nation’s first Certified Humane Goat Dairy in 2005. 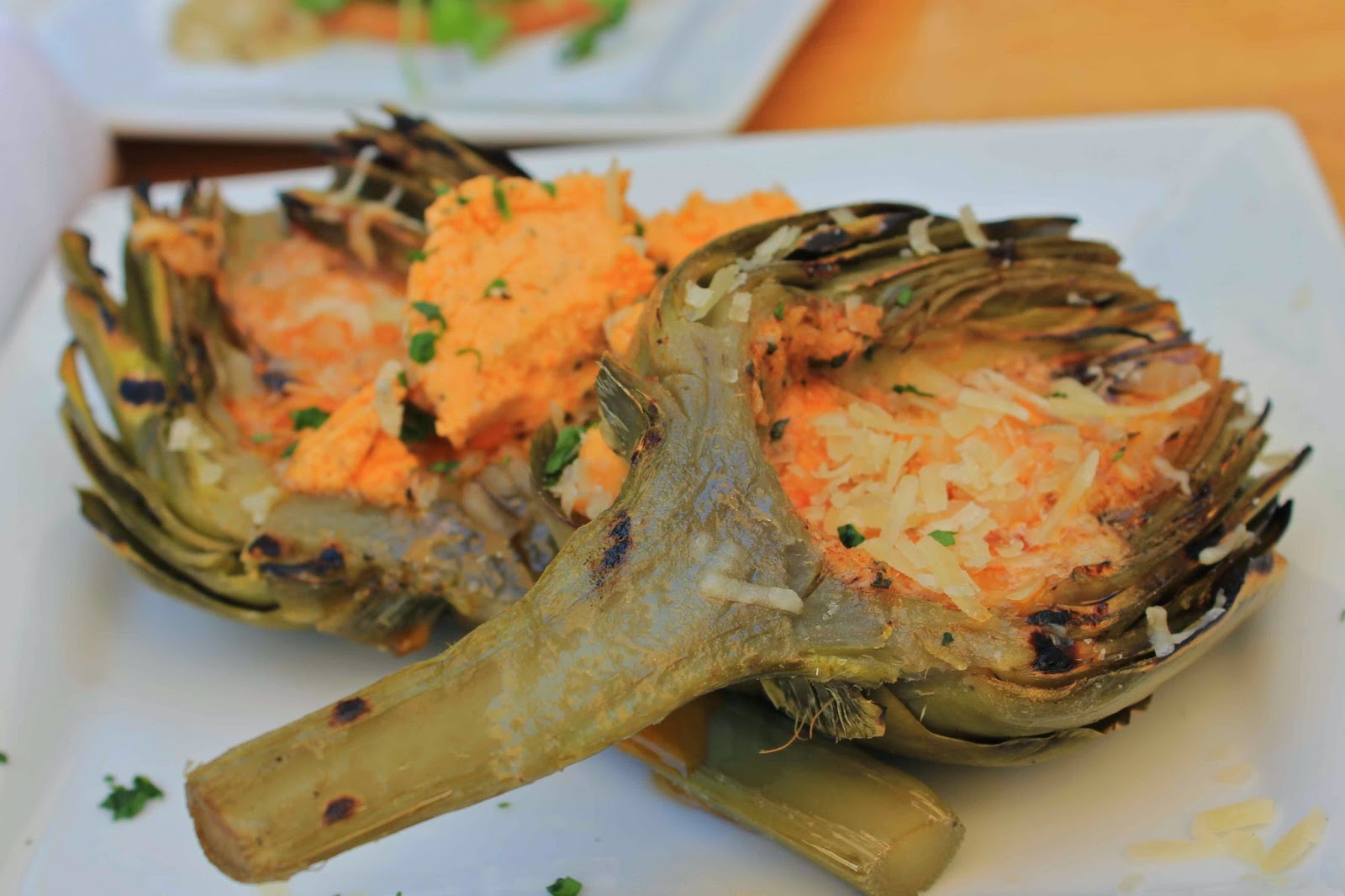 Our other appetizer was the Grilled Castroville Artichoke with Smokey Garlic Butter, Vella Dry Jack Cheese and Lemon ($10) was absolutely smashing!!!  The garlic butter was out of this world. 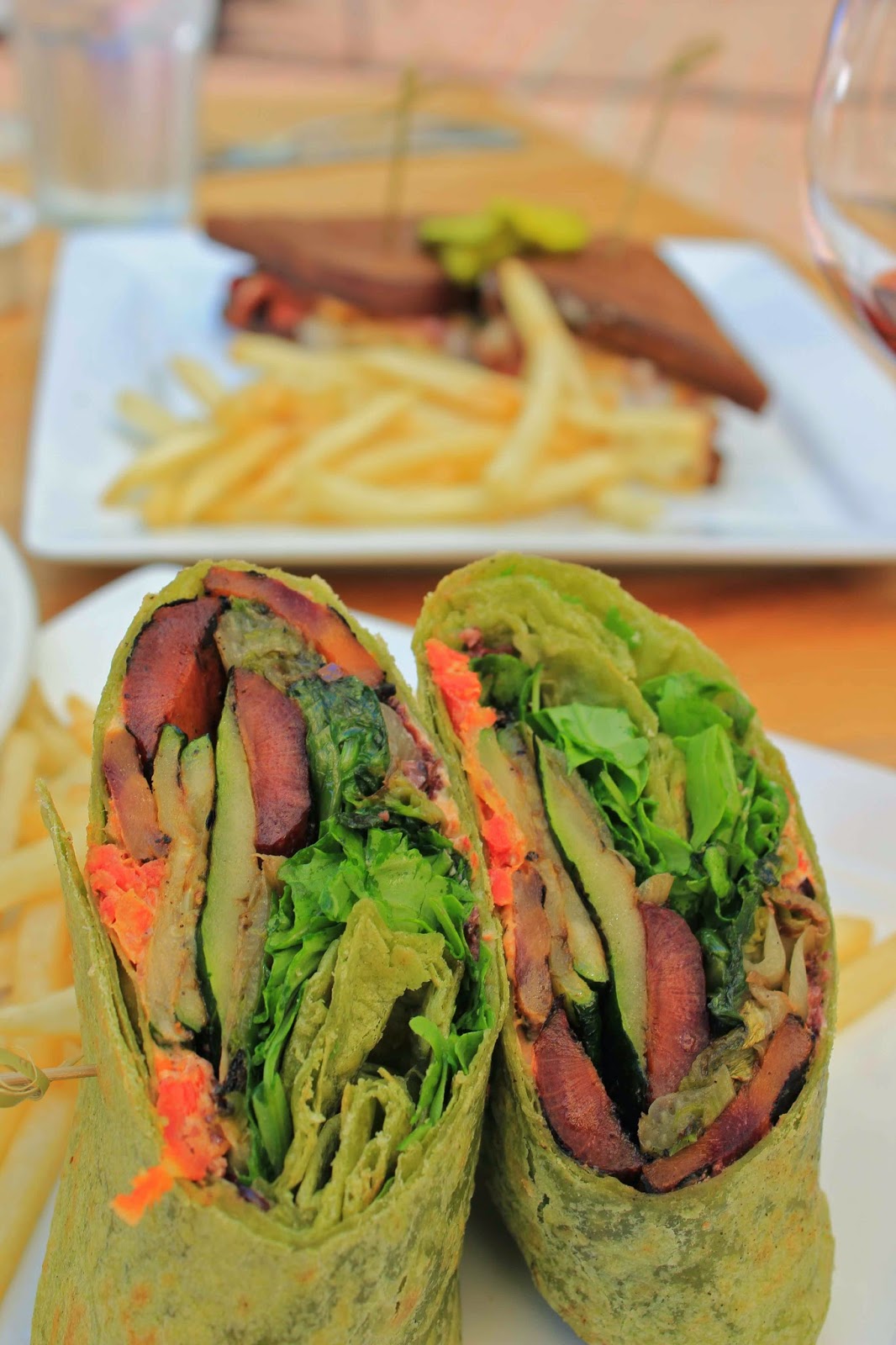 Our next wine sampling by James was RVV’s `12 SingleVineyard Pinot Noir - Fratti Lane Vineyard.  RVV’s Fratti was a Silver Medal winner at North of the Gate Wine Competition (a competition that focuses on Northern California wines at the Sonoma-Marin Fair).  This wine has an excellent concentration, delicate smoothness and mouth feel, balanced with rich dark berry, currant, and spice. This Pinot did not disappoint and had a not so wild and crazy price point of $55.

This was followed by their ‘12 Benedetti PinotNoir ($55); another Single Vineyard Pinot Noir that was a Gold Medal winner at the North of the Gate Wine Competition.  These grapes hail from the Benedetti Vineyards in the beautiful Russian River Valley.  This wine is full of lush black cherry and warm vanilla spice with caramel notes and hints of smoke. 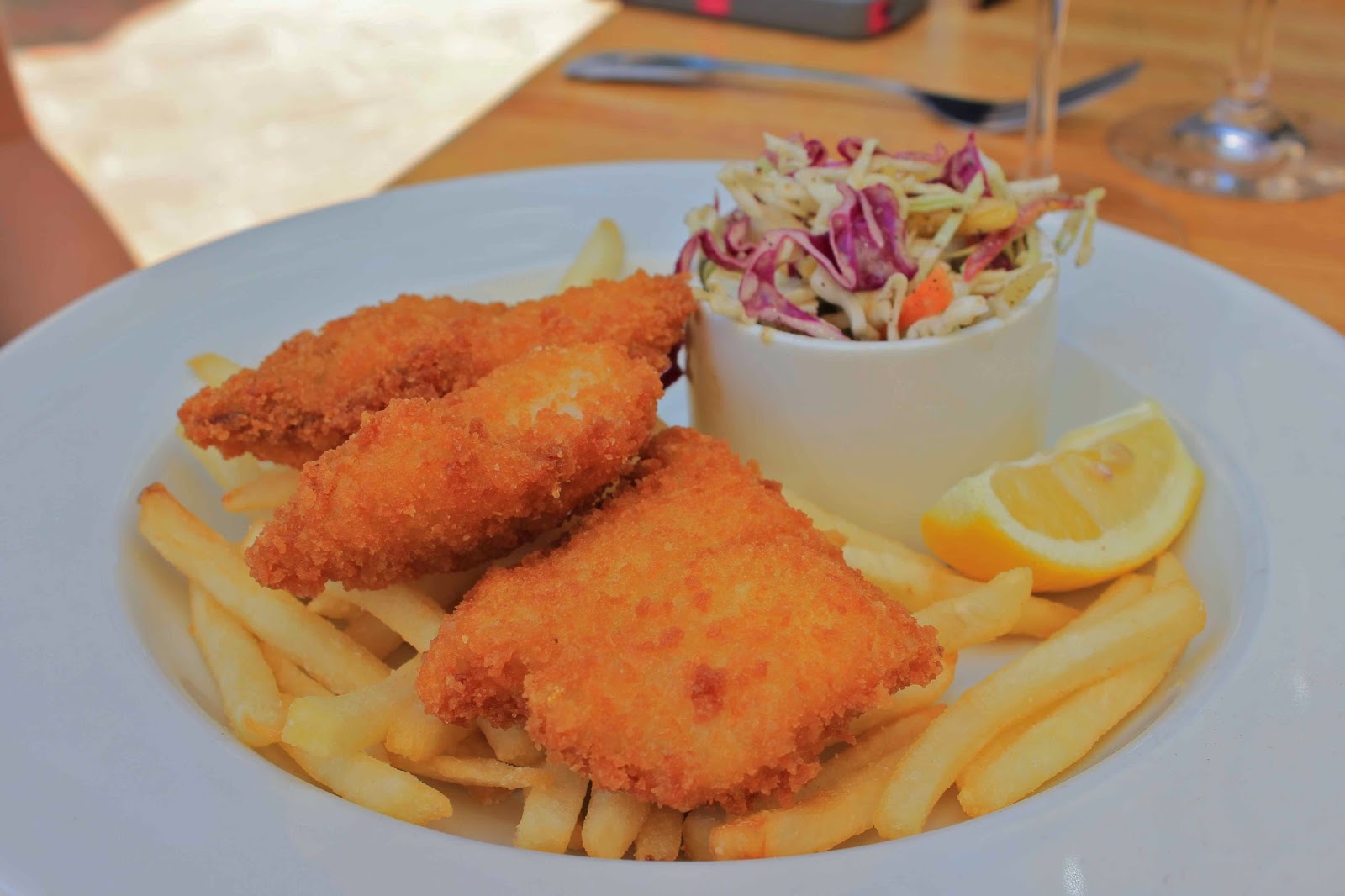 Onto the main course, I dinned on the Grilled Vegetable Wrap ($13.50).  Composed of Olive Tapenade, Sundried Tomato, Redwood Hill Farm Chevre (there it is again), Grilled Carrots, Squash, County Line Escarole with Corks Garden Arugula wrapped in a Spinach Flour tortilla.  The dish was smoky vegetable deliciousness with truffle fries.  Yummm (with 3 Ms)!!!

Kelly sampled the Bodega Fish and Chips ($15.75).  A “Not So Traditional Spin” with Locally Caught Cod, Panko Breaded, Jalapeno Remoulade and Corks Slaw, she said it was everything Fish and Chips aspires to be: light and crisp with nary an oiliness about it. 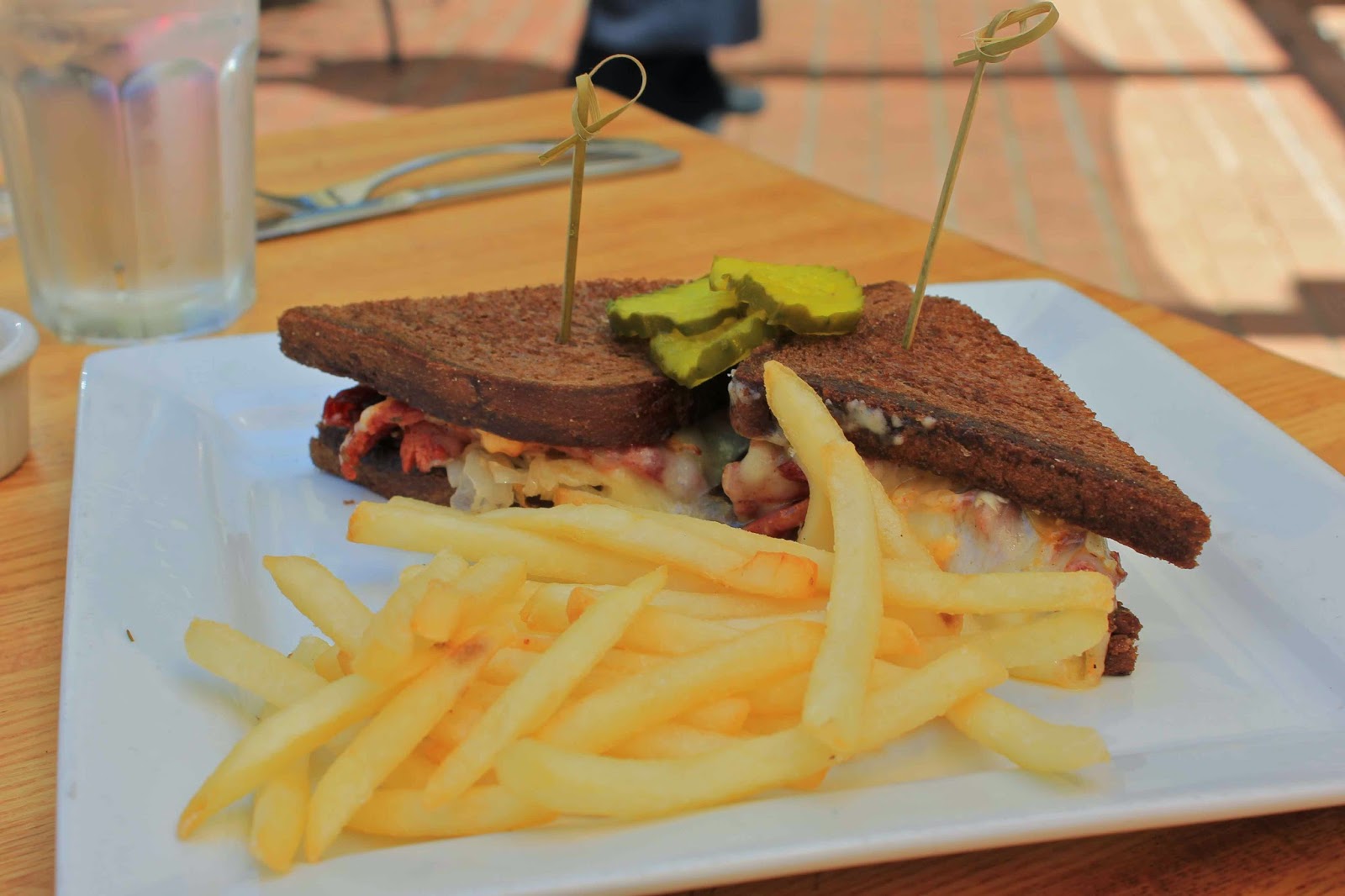 Our amazing tour guide Mr. Raymond Rolander dined on the Ruben’s Reuben ($15).  House Smoked Pastrami housed on Costeaux’s Dark Rye (Costeaux FrenchBakery is located in Healdsburg and is known for their legendary artisan breads), Havarti, and Gruyere Cheese, with Sauerkraut and Spicy Sriracha Thousand Island.  Raymond and Kelly both agreed it the was the shining star of the lunch. 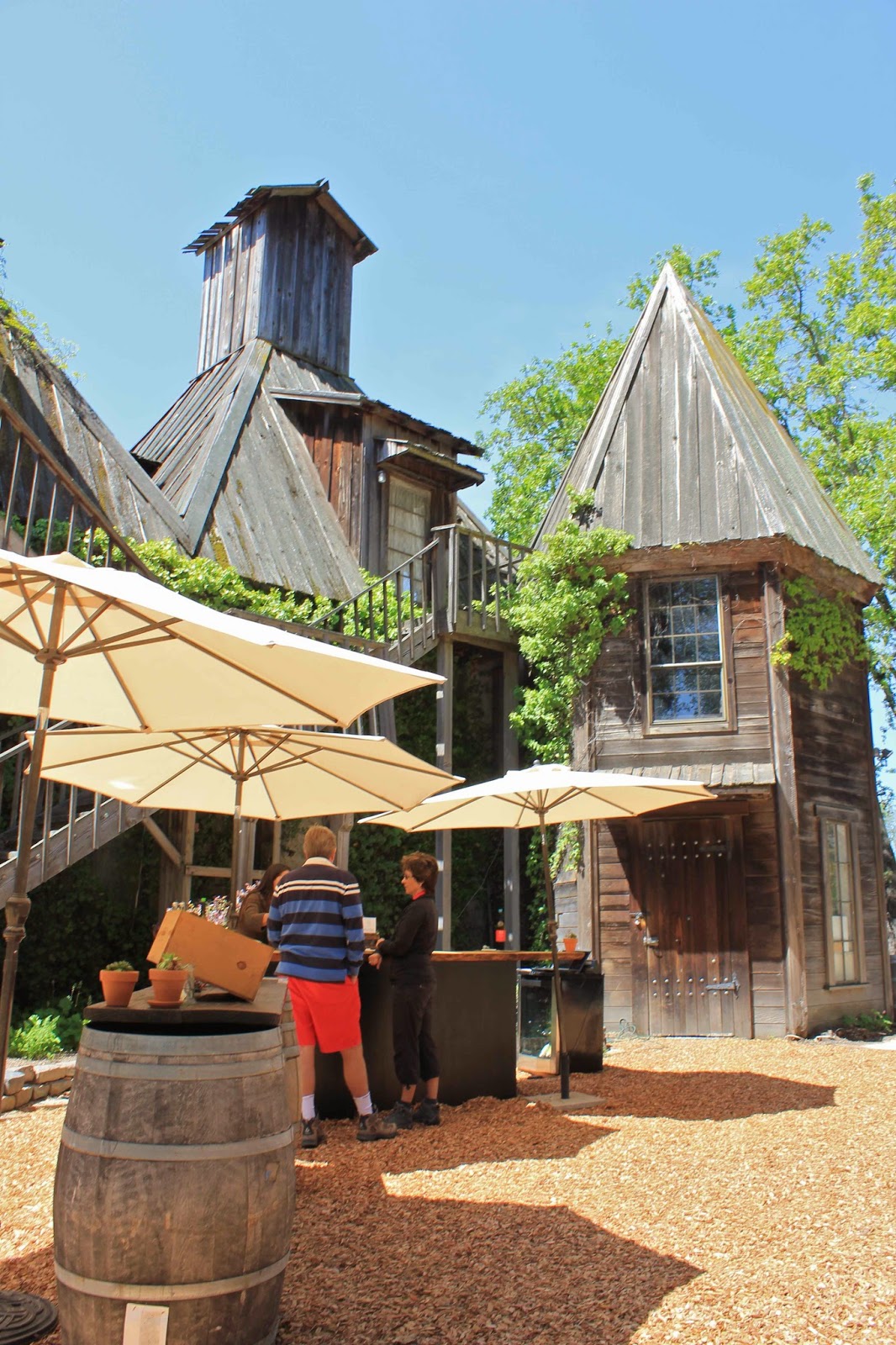 An awesome thing about joining the Russian River Vineyards wine club is that members and their guest enjoy discounts of 20% on Corks Restaurant food and wine portion of their bill.  So along with the organic practices, the locally sourced menu, and the rustic ambiance there’s one more reason to drive down their winding path road and experience what Russian River Vineyards has to offer.