Our Editor in Chief, Kat Thomas recently wrote an article that was featured in the Cannabis website Civilized entitled Charity Cannabis Calendar for Veterans Censored by State about The Emerald Dames of Sin City.  Check it out below! 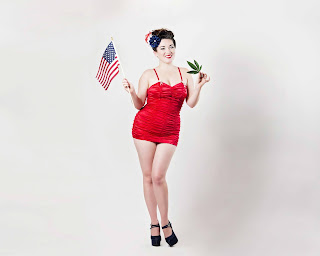 You can't fight City Hall, but one group of Cannabis Pin-Ups is doing just that to help raise money for Veterans suffering from PTSD!

From Betty Grable donning the nose of WW2 fighter plane to Rosie the Riveter arching her back for the cause, throughout history pictures of pretty ladies have help raised money for Active Duty Service Members and Veterans. So with that in mind, in August of 2017, Cannabis photography company Dope Foto and Cannabis entertainment group The Green Light District came together to create the inaugural issue of The Emerald Dames of Sin City, a Las Vegas Charity Pinup Calendar.

“For us, creating the calendar is a way to rally public support for Veterans rights to utilize Cannabis once they’ve returned home from serving our country,” notes producer Julia Reed Nichols, who's company Do Right Industries produced the calendar. “Thus, 10% of the proceeds from The Emerald Dames of Sin City will go to the award-winning Cannabis non-profit Grow For Vets.” Grow for Vets is a tax exempt organization that helps Veterans with PTSD, TBI, chronic pain, and other serious medical conditions obtain and grow Cannabis. In 4 years since forming, the group has served more than 40,000 Veterans and given away $1.5 million in free Cannabis to Veterans in states where medical Marijuana is legal. 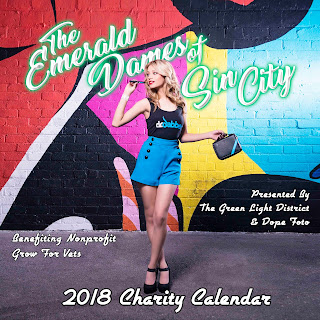 A Marijuana user due to epilepsy, the combination of Pin-Ups, Cannabis, and raising money for Veterans was the perfect fit for Nichols. The last of those being something she knows quite a lot about. In the last three years Nichols' entertainment company Pin-Ups on Tour (a division of Do Right Industries) has donated $50,000 in free Veteran tickets and monetary donations to Veteran non-profits such as AmVets, Heels For Combat Boots, Recon Sniper Foundation, Pin-Ups For Vets, American Legion posts, VFW posts, and Grow For Vets. Her Pin-Ups on Tour shows have been performed in 45 states bringing together 9,000 people to support our troops. She has been able to donate over 2,400 tickets to Veterans, and have been able to entertain close to 3,000 Active Duty and Veteran Service Members in our nation's VA Hospitals and Veterans Homes.

The cost of the creation of the project (photography; hiring models, makeup artists, and hairstylists; wardrobe; and printing of the calendar) was offset by potential sponsorship of each page month (and the cover) by a different Marijuana brand. In the end 4 Cannabis brands chose to participate, 3 of which are MMEs (Medical Marijuana Establishments).

Although the calendar itself is a piece of editorial work, sponsorship of a month by an MME was considered advertisement which required the MME submit it to the Department of Taxation, the Marijuana Enforcement Division.

The 6x6 inch calendar was printed in early November and pre-sales commenced. An article was even published in Civilized during Veterans Day week about the work we were doing. All that was left to do was wait for State approval for our 3 MME sponsored pages. But on 11/29, weeks after our MMEs had submitted, 2 out 3 of our MME pictures were rejected by the Department of Taxation.

The two images in questions: January which was an image of a stylish lady in a sequined sparkly gown holding a unlit joint in one raised hand and a jar containing Marijuana flower in the other; and February which was an image of a Pin-Up chef holding a flour dusted wooden spoon close to her happily grinning mouth. According to the State, both indicated “Intent to Consume.”

This rejection this was a surprise to both the producers and sponsors. “As a photographer in the Cannabis industry for 3 years, I am plenty aware of the state regulations in regards to consumption of Cannabis in photographs,” notes calendar photographer and producer Shannon Dorn of Dope Foto. “We made sure all models were in the safe zone at all photo shoots; no one was to consume and no one was to look as though they were consuming.”

But with the potential for the sponsors to be fined $50K or more, The Emerald Dames of Sin City had to figure out a solution. Within 24hrs, we sent our contact at the Department of Taxation, Marijuana Enforcement Division alternative photos from which they could chose a replacement image. Thus, allowing us to sticker over the censored images and release the calendar while still including our sponsors.

The Nevada Marijuana Enforcement Division's decisions on whether advertisements are acceptable are ruled by committee. “Their choices can seem very arbitrary at times,” states Nichols. “It's like that old statement about pornography... I'll know it when I see it.” Recently an advertisement for a Cannabis infused beverage company's Mango flavored product was rejected by the State because it included shots of Mango fruit in the ad. The explanation: Kids like fruit and thus the picture could potentially be advertising to children...

In mid December, two weeks after our MMEs resubmitted their images, our December month MME received an email stating that their January MME picture (the same MME sponsored January and December, just with different specific brands) was rejected because the model was holding an alcoholic beverage. Yet that statement is erroneous as the January model is holding, as previously noted, a jar of flower and not an alcoholic drink.

The Marijuana Enforcement Division also informed this MME that The Emerald Dames of Sin City cover image and our June page were also reasons the calendar could potentially get rejected. Their rational was that the cover image involved consuming vape pens. But although the pen is near our models lips, it is not in fact touching. And as for our June image, the State was inclined to dismiss it because the image showed “the model with what would assumed to be an alcoholic drink. Yes it technically 'could be juice,' etc. but the perception of a martini glass or a glass of anything at what appears to be a party would be alcohol.”

It is illegal for advertising images to include both alcohol and Marijuana in the same shot. Yet our model held in her hands a martini glass full of blue sugar water and nothing more. The glass was chosen to indicate a classy time not alcohol, to indicate sophistication not booze. A glass is just a vessel, technically defined as “a drinking container.” What is inside of it, ice cream, water, or alcohol, defines it's specific use.

But these details are unimportant as the Department of Taxation, Marijuana Enforcement Division does not have a right to regulate these images at all as these pictures were editorial pages from the calendar, not MME advertisements.

All of this red tape is never good for business. “We had numerous pre-orders on this charity calendar from Veterans across the nation wanting to give it as a Christmas gift...,” notes Nichols. “We were sitting on 3,000 calendars that we couldn't legally distribute. Calendars are timely in nature; they usually only sell from a window of November to February. This means to raise the most money possible for Grow For Vets the product needs to be available as soon as possible.” To add to the frustration, this calendar is the fastest selling pinup calendar Do Right Industries has ever produced.

Due to the seasonal nature of calendars and the fiduciary responsibility we have to Grow For Vets, The Emerald Dames of Sin City has decided to sticker over our 3 MME sponsored pages of the calendar (and the back cover with their logos). This will make the calendar fully editorial. “Once our MMEs have heard from the State, we'll be happy to sell the complete calendar,” notes Nichols. “But until then, this was our only course of action without having them receive a hefty fine.”

“On a larger note, we felt we needed to let the world know the state of bureaucracy when it comes to Cannabis advertising policies in the state of Nevada,” continues Nichols. “We set out to make a fun charity calendar to bring the Cannabis Community of Las Vegas together, but the degree of hoops we've had to try and jump through on this experience has reached Kafka-esque levels. This is a Marijuana experience that needs to be more known by people looking to do Cannabis business in Nevada.”

But for right now there's stickering to be done! Because despite a few bureaucratic bumps, there's still 3,000 calendars to be distributed and sold. With The Green Light District negotiating shows for the upcoming months in Los Angeles, Portland, and Seattle, The Emerald Dames of Sin City with be hitting the road as merchandise at these events.

For at the end of the day the focus has always been about raising money for a great Cannabis non-profit. “There are Veterans out there who need help, and contributions from this calendar do our part in making this happen,” notes photographer Shannon Dorn. “It's only right that we do what we set out to do: raise funds Grow For Vets so they can help Veterans find a safer and alternative medicine through Cannabis.”

You can order your calendar for The Emerald Dames of Sin City online at thegldexperience.com You can either purchase one for yourself or donate to a Veteran allowing your calendar to be distributed in GFV Cannabis care packages.

Kat Thomas is the Co-Owner of The Green Light District, a Las Vegas/Los Angeles Cannabis entertainment company. She is also the CEO of the creative media company This Way Adventures.
Posted by Kat Thomas at 10:22 AM