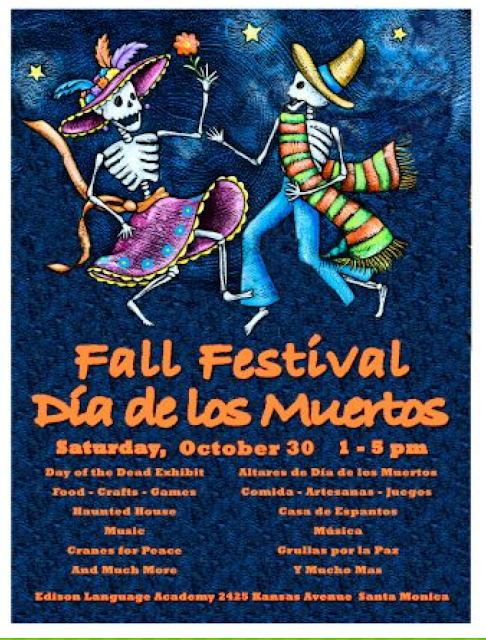 If you're looking for something to check out: the largest Día de los Muertos Festival is running at Edison Language School from 1-5pm today. Below is a reprint of my article that ran in the Santa Monica Observer this week. Check it out and help a good cause!

This Saturday October 30th from 1-5pm both the Hispanic and non-Hispanic community will come together at Edison Language Academy to honor the dead. Edison, Santa Monica’s dual language elementary school, will hold their biggest fundraiser of the year. This fair includes such traditional Día de los Muertos events as altars, decorated by their kindergarten through fifth grade students, that honor those who have passed away and Sugar Skull creating and decorating. Along with these cultural events food lovers of all different demographics will enjoy such treats as homemade tamales made by the school’s PTA and a Cakewalk, the equivalent of musical chairs involving cakes. All this, along with live music, crafts, games, and a Halloween haunted house, makes it the largest Day of the Dead Festival in Santa Monica.

Edison Language Academy is one of the longest running dual language immersion programs in California, and one of only a handful in the United States. At Edison ninety percent of Kindergarten and First Grade are taught in Spanish to both Spanish and English speaking students. The school focuses not only on Spanish language skills but also on cultural holidays from the Hispanic culture, and Day of the Dead is one of the granddaddy of all events.

“The day of the dead is very significant in the Hispanic culture,” explains Lisa Mead, mother of two, third and fifth grade respectfully, Edison Language Academy students. “Some people might look at our Festival and think of as Halloween event, but it’s much more than that.” “While the holiday falls near Halloween, it is a very different,” explains Lori Orum, Principal of Edison Language Academy. “What we know today as Día de los Muertos has its roots among indigenous peoples in modern day Mexico and Central America and goes back 2,500-3,000 years. Traditional belief was that over several days in November, the lines between the world of the living and the world of the dead blur so that the souls of loved ones could come back for a brief annual visit. Where this holiday is observed, families will often decorate a table in their homes with pictures and the favorite foods of the family’s departed members, clean and decorate graves. And sometimes hold vigils and celebrations in the cemetery.”

“It’s a really important ritual in Mexican culture to celebrate and honor their ancestors and relatives who have died recently. It’s a joyful thing in the Mexican culture, something that can sometimes be hard for us Protestants to wrap our heads around,” jokes Lisa Mead. Principal Orum notes that Edison’s observance of this holiday is rooted in the fact that rituals for remembering the dearly departed can be found in nearly every human culture. “People burn candles, sit shiva, display photos, take flowers to the cemetery, observe anniversaries, name children after departed relatives, etc.”
The most impressive part of this annual event are the massive altars that the 460 students of Edison Language Academy help create that fill the entirety of the school’s Cafeteria. “Our commemoration of Día de los Muertos includes the custom of the household altars,” states Principal Orum. “In our case, each class decorates a table with offerings to remember people (and sometimes pets!) That were special to the children in that classroom.” There are so many different types of offerings. You may see food and water, candles, works of art, notes, and Marigold flowers on the altars. Traditionally many families will also offer big bottles of tequila to their male ancestors, but naturally the school isn’t so down with that part of the tradition since the event involves elementary students.

Each classroom creates a unique altar having the kids bring pictures relatives who have a passed away. “It is really a great way to do genealogy in the family,” explains Lisa Mead. “Through researching their relative’s histories the kids learn something about their ancestry. In the past Michael and Jackson have brought in pictures of grandparents and great great grandparents. I had a nephew who passed away over the summer and Michael, my oldest, wants to bring in picture of him for his class’ altar to honor him.” But the altars don’t always have to honor people that the students personally know. “Sometimes the displays are dedicated to people who are not family members but whom we want to remember,” explains Principal Orum. “Particularly that year victims of a flood or earthquake, victims of war, people who have been great inspirations to others, etc.”

But Edison’s Day of the Day event is not just about honoring the dead; it’s about bringing out the community to enjoy the moments of being alive. “The Day of the Dead festival is really for the whole community,” notes Lisa Mead, “not just for those connected to the school.” The festival offers a variety of opportunities of learn and enjoy more about traditional Hispanic cuisine. The Thursday before the Día De Los Muertos Festival, the PTA mothers and fathers come together for a Tamalada, where they make all tamales for the festival. The Hispanic moms who traditionally make Tamales teach the families that aren’t so well versed on the subject.

Another Day of the Dead tradition to be experience at the festival is the creation and decoration of Sugar Skulls. Sugar Skulls traditionally represent a departed soul, can have the name written on the forehead and was placed on the home Ofrenda or gravestone to honor the return of a particular spirit. Students make them, or buy them at the Hispanic bakery on Oceanpark, and colorfully decorate them. Sugar Skull art reflects the folk art style of big happy smiles, colorful icing and sparkly tin and glittery adornments. Festival goers can sample is the Pan de los Muertos, a sweet egg bread, similar to Challah, with a figurine of a Saint stuck in the center. Another fun food event is the Cake Walk. Similar to musical chairs participants walk around in a circle to music with donated cakes in the middle. When the music stops, if you are in front of a cake you win it.

The economy being what it is, it’s a given that school budgets are tight. Along with being an event for the community the Día De Los Muertos event is also the largest fundraiser for the Edison Language Academy. This is especially true for the 5th grade class, who are traditionally in charge dessert and drinks for the Day of the Dead event. The profits from the festival raise money allowing the fifth graders to visit Catalina Island for 3 days in the Spring where they are able to experience nature in action and study such subjects as marine biology.

So if you’re interested in seeing how the Hispanic culture honors their deceased loved ones, seeing how you fair at decorating a Sugar Skull, or just want a chance at winning a homemade cake in a Cake Walk, mark you’re calendars for this Saturday from 1-5pm.