A Night and a Day in Morro Bay, CA 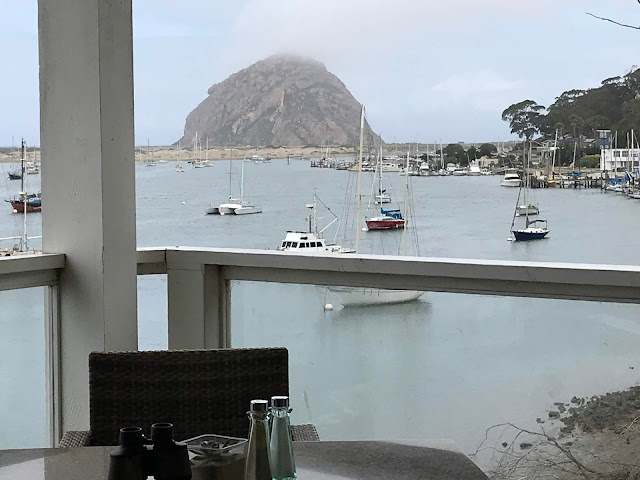 A Night and a Day in Morro Bay, CA
By Kathleen Berry, Lifestyle Editor, Edible Skinny 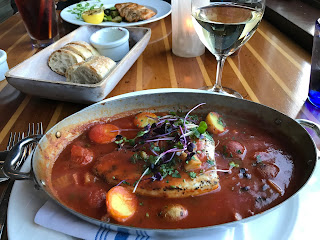 When faced with a Sunday drive from LA to Benicia, a minimum of five and a half hours, my sister and I decided to make it a three day weekend by stopping over in Morro Bay. Morro Bay is a waterfront city in San Luis Obispo County, California located along California State Route 1 on California's Central Coast.

The weather in LA was perfect so we had a leisurely brunch at Shutters - highly recommended - followed by a stroll on the beach at Santa Monica, and because of this we didn’t hit the freeway until four in the afternoon. We arrived after dark in Morro Bay and went straight to our lodgings at The Inn at Morro Bay. The Inn is a sprawling complex of smaller buildings, each with parking. It was April, off season, so we went for a waterfront room at a great price. We arrived just in time to catch a late dinner at the restaurant in the main building. The menu was not large but had plenty of tempting choices. The service was good, the food was delicious, and the fire we sat in front of was perfect for a chilly evening. 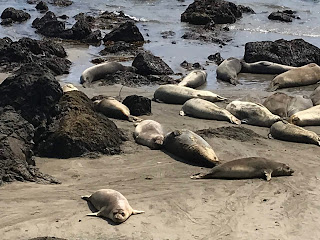 We woke up to a foggy morning. In front of our room was a myriad of sailboats bobbing on their moorings and a view of the famous Morro Rock. As we ate breakfast in the lodge overlooking the water, the weather cleared and the enormity and majesty of the Rock was revealed. We packed quickly and proceeded through town to Morro Bay State Park. As we approached the Rock just seemed to get bigger and bigger until it appeared to tower over the entire town. It’s a very tall: 576 feet high. We first went to the north side of the park where surfers, people with their dogs and even horseback riders populated a beautiful long curve of white sand beach. The water sparkled in the sun and the surf was moderate with gently breaking waves. If it had been 80 degrees I would have gone for a swim. 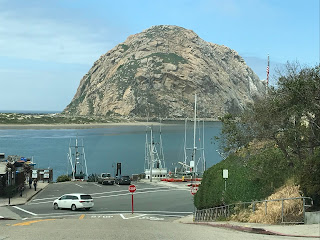 After basking in the sun and enjoying the action taking place on the beach, we moved to the south side of the Rock. There a breakwater forms a protected entrance to the harbor that fronts the town. Here we were treated to the antics of several groups of sea otters and also a seal. The man parked next to us was spearfishing and having some success. Boats came and went. There was a sightseeing boat that carefully moved alongside the otters so the tourists could have a close-up view. We just sat on a bench and took in the sights. The park was peaceful and quiet as it was a Monday and the kids were still in school. 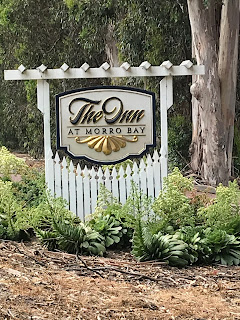 We hated to leave but we were headed to Elephant Seal Beach further up the coast just past San Simeon and then to Monterey for a seafood dinner. The elephant seals are always a sight to see piled on top of one another, flinging sand on themselves to stay cool, and grunting and barking at each other if one of them decides he has to move. We didn’t arrive in Monterrey until the evening as we took the long and winding Big Sur coast road with its unparalleled views of cliffs, boulders, and ocean. It was well worth the trip. At Monterey we picked a restaurant at random and had dinner at Schooners Coastal Kitchen, which is well hidden inside the Monterey Plaza Hotel. It is on historic Cannery Row overlooking the bay. The salmon was outstanding and the swordfish, surprisingly cooked in a tomato sauce, had a great combination of flavors. 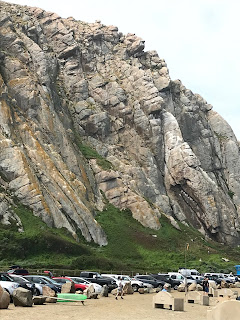 Our brief night and day stay was over and it was time to hit the road for the remainder of the ride back home to Benicia. We slid through San Jose at 9:30 p.m., avoiding the normal congestion and traffic, and it was an easy drive the rest of the way. We arrived home tired but refreshed by our day by the sea. Salt air, sunshine, the sound of the sea, without the crowds - that’s Morro Bay on a sunny April day. You can’t beat it. 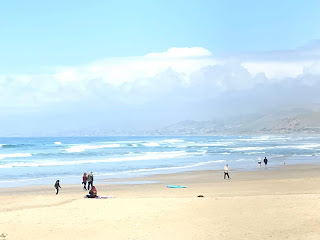 Kathleen Berry is an adventurous senior who loves to travel. She recently moved to the San Francisco Bay area from the Jersey Shore. She has traveled extensively on both shoestring budgets and go for broke grand scale. She is fond of cruising and has shipped out on various cruise lines from a variety of ports. She truly believes the way to find the best local food is to always ask a local.
Posted by Kat Thomas at 11:12 PM