Hey Guys! This was an article that ran a few months ago at the SM Observer, but I was having a conversation with a friend who was looking for a Westside CSA so I thought I'd post the info for all to read. Enjoy! (And also enjoy the pretty pretty picture of a carrot that I drew!) 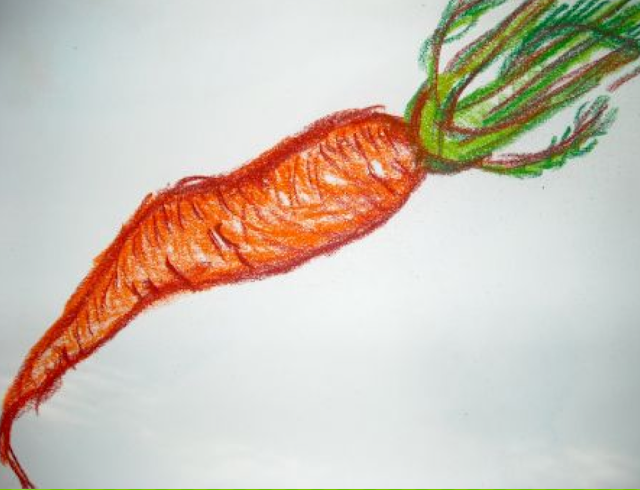 Community Supported Agriculture for a Cause

Each Saturday Santa Monica residents head over to a local Sunset Park home to discover what surprises lay in store for them in their South Central Farmers’ Cooperative CSA boxes. Boxes brimming with organic vegetables and fruit that they will take home to be sautéed, baked, and grilled. Recent boxes have included a rainbow of colors Red Kale, Blue Kale, Armenian Cucumber, Yellow Squash, Zucchini Squash, Purple Basil, and Okra. “I think you can just taste the difference,” notes Liz Chavez, a Santa Monica resident who helped bring this CSA to Santa Monica. “It’s the healthiest Chard you can ever imagine, the sweetest Carrots. You can taste the care that the farmers put in to growing these vegetables.”

For those who aren’t up to speed with their acronyms (which always seems to be the case…) CSA stands for Community Supported Agriculture. If going to the farmers market is al la carte than a CSA is the pre fixe menu. Developed in the U.S. in 1984 in response to food quality and the urbanization of agricultural land, the consumers buy direct from the farmer through a membership. A CSA consists of a community of individuals who pledge support of a farm operation through a set fee, a sliding scale in case of the South Central Farmers, in exchange for a box of fresh, locally grown, organic produce. This produce is delivered weekly to twenty-two possible pick-up locations including the Santa Monica Pico pickup point. “There are so many benefits,” notes Chavez. “It’s what the experts are telling what we should do for our own health. It’s environmentally sustainable because you don’t have to use oil to transport the food.”

The CSA arrangement creates several rewards for both the farmer and the consumer. For the farmers it includes getting to spend time marketing the food early in the year, having an opportunity to meet the people who eat their food, and (most importantly) receiving steady payment for their produce, which can help with ups and down of a farm’s cash flow. For consumers along with advantage of ultra-fresh food there’s the exposure to new vegetables and cooking (most CSAs post recipes for their more unusual items on their website) and the time spent not having to pick out individual items at a market. The government does not track CSAs, so there is no official count of how many CSAs there are in the U.S, but the trend is definitely growing. In 2008, 557 CSAs signed up with the website Local Harvest, which has the most comprehensive directory of CSA farms, and in the first two months of 2009, an additional 300 CSAs joined the site. Local Harvest now has over 2,500 listed in their grassroots database.

For the South Central Farmers CSA all boxes are the same size (some CSAs do large and small) enough to feed (approximately) a family of four for a week or a single/couple for two weeks. “You don’t have to make long-term commitment. You can do week-to-week, monthly or six month,” explains Chavez. “You can make it work for your budget.“ The price of the box varies depending on someone’s ability to support the farm financially from $25 a box to $15 for low income families. The South Central Farmers CSA encourages folks to pay, via Paypal, at the highest level they can. For $40 you can buy a box for yourself and support a community member in need, half of this purchasing price is tax-deductible. “What always strikes me with the South Central Farmers is the profound sense of community. In this wake of economic and environmental disasters it’s what we all need to cultivate more: something bigger than us, the sense of community,” notes Chavez.

This becomes even more profound when you learn a little history about the South Central Farmers. Although now located near Bakersfield the farm’s moniker is not without reason.
It was an oasis in a desert. Established in 1992, in the aftermath of the Rodney King Insurrection, the South Central Farm became the largest urban agricultural landscape in the nation. Ten of 14 acres at the urban site, in the middle of a warehouse and wrecking yard district, were intensively cultivated by over 300 low income farmers with more than a 100 different species of unique Mesoamerican heirloom row crops, medicinal herbs, fruit vines, orchard and sacred ceremonial trees, and cacti. “It’s eye opening. There’s no supermarkets in South Central, only liquor stores and fast food. It’s called a food desert,” explains Chavez. “And with severely limited access of fresh food this results in a high rates of obesity and diabetes. With the garden they had control of their own food production.”

In 2003, The South Central Farmers organized a campaign to save the farm from developers. The farmers resisted eviction until June of 2006. This eviction occurred despite the fact that the South Central Farmers successfully raised the $16.5 million the landowner was asking for the purchase of the land. The origins of the farm and the 3 year long campaign against eviction became the topic of an Oscar-nominated documentary film, The Garden. “They’re the hardest working people I’ve associated with. Working nonstop pulling together,” Chavez says with more than a bit of pride. “When the city of LA couldn’t find the political will to support them they got donors till. They worked to the bone to get the land at 41st and Alameda: it was tragic that they got evicted.”

Over the past four years since the eviction, the South Central Farmers have gone on to establish a farm near Bakersfield in the community of Buttonwillow, about two hours north of LA (quite a daily commute). Last month, the farmers had a ceremony attended by Congresswoman Maxine Waters to initiate the opening of the irrigation system to water the 80-acre Buttonwillow site. However, the farmers seek to return to their urban roots, while continuing to build the broader movement for food sovereignty through the activism of their "community-based agriculture" project in Buttonwillow.
And hopefully someday they will. By joining their CSA you have a voice on how your food is grown while helping to keep the now approximately thirty farmers that run the South Central Farm Cooperative in Buttonwillow employed and closer to working closer to home again. “It’s really a matter of social justice supporting our farmers, the hardest working people out there,” continues Chavez. “It’s delicious produce that’s healthy, organic, and local. It’s about food and food sovereignty. They’re the leading edge of the urban farming movement.”
Posted by Kat Thomas at 2:41 PM